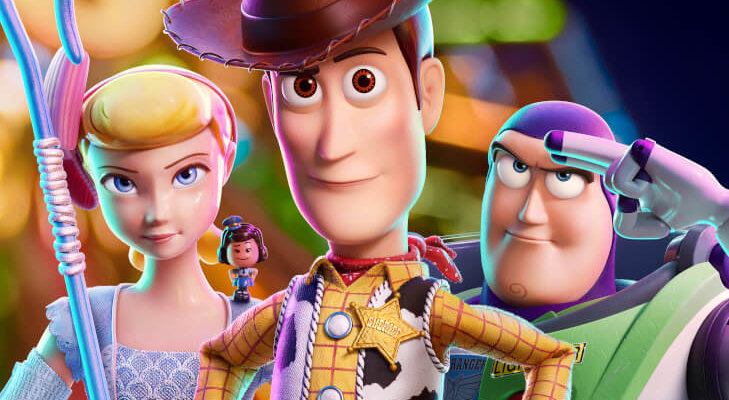 Since their debut on the big screen in 1995, the Toy Story characters have been beloved for generations. Marking a major milestone in animated moviemaking as the first fully computer-animated feature film, the characters were rooted in reality—dealing with successes and disappointments, juggling confidence and insecurity—ensuring that audiences would see themselves in the toys.

The toys are back on the big screen with an all-new adventure in Toy Story 4 with Woody, Buzz and the whole gang finding themselves far from home, discovering new friends—and old ones—on an eye-opening road trip that takes them to unexpected places.

It is directed by Josh Cooley, from a screenplay crafted by producer Andrew Stanton and Stephany Folsom.

“Like most people, I assumed that ‘Toy Story 3’ was the end of the story,” says director Josh Cooley, who was in high school when the first Toy Story premiered in theaters. “Turns out it was only the end of Woody’s story with Andy. Just like in life, every ending is a new beginning. Woody now being in a new room, with new toys and a new kid, was something we have never seen before. The questions of what that would be like became the beginning of an entertaining story worth exploring.”

Cooley joined Pixar Animation Studios in May 2003 immediately after graduation as an intern in the story department. He has since worked as a story artist on the Academy Award-winning films The Incredibles, Ratatouille and Up. Cooley served as the story supervisor, voice talent and a writer on the Academy Award-winning feature Inside Out, and was nominated for a best original screenplay Oscar. He made his directorial debut with “Riley’s First Date?” a short featuring the characters from Inside Out. Born in Berkeley, Calif., and raised by wolves., Cooley’s earlier influences include Mad magazine, Steven Spielberg’s movies, and “Who Framed Roger Rabbit.

“To me, the ‘Toy Story’ characters are the Mickey, Donald and Goofy of Pixar. Woody and Buzz have become part of moviegoing lexicon. ‘Toy Story’ was not only Pixar’s first movie, but it was the first feature-length film to be completely computer animated.”

What was it about these characters that touched so many people?

According to Andrew Stanton, who’s contributed to and/or written all of the franchise’s stories, it boils down to the inherent magic. “I think there was something to the voodoo of tapping into the collective desire that everybody—whether they’re aware of it or not—wishes their toys were alive,” he says. “I think the other reason people gravitate toward these characters is that we gave our toys a slightly adult sophistication rather than making them naïve, wide-eyed puppies. We made them more parental.”

Andrew Stanton has been a major creative force at Pixar Animation Studios since 1990, when he became the second animator and ninth employee to join the company’s elite group of computer animation pioneers. As vice president, creative, he oversees all shorts and feature projects at the studio. Stanton wrote and directed the Academy Award-winning feature film “WALL•E, for which he also received a best original screenplay Oscar-nomination.

In 2016, Stanton directed Disney and Pixar’s Finding Dory, which, upon release, became the highest-grossing domestic animated feature of all time. Stanton made his directorial debut with the record-shattering Finding Nemo, an original story of his that he also co-wrote and was awarded an Oscar for best animated feature Film of 2003, the first such honor Pixar Animation Studios received for a full-length feature film.

One of the four screenwriters to receive an Oscar nomination in 1996 for his contribution to Toy Story, Stanton went on to receive credit as a screenwriter on every subsequent Pixar film – A Bug’s Life, Toy Story 2, Monsters, Inc. and Finding Nemo.

Additionally, he served as co-director on A Bug’s Life, and was the executive producer of Monsters, Inc., and Monsters University, and Academy Award-winning films Ratatouille and Brave.

In addition to his multi-award winning animation work, Stanton made his live-action writing and directorial debut with Disney’s “John Carter,” released in March 2012.

A native of Rockport, Mass., Stanton earned a Bachelor of Fine Arts in character animation from California Institute of the Arts (Cal Arts), where he completed two student films.  In the 1980s, he launched his professional career in Los Angeles, animating for Bill Kroyer’s Kroyer Films studio, and writing for Ralph Bakshi’s production of “Mighty Mouse, The New Adventures” (1987).

“The ‘Toy Story’ films accomplish what timeless classics aim for,” says actor Tom Hanks, who has voiced Woody for 24 years. “They are full of innocent characters who face an endless trail of adventures. We all know the likes of Woody, Buzz, Bo Peep and Mr. and Mrs. Potato Head, and we wonder who we would be…if we were toys.”

According to producer Jonas Rivera, the filmmakers felt a huge sense of responsibility toward Woody and the rest of the toys. “People love them—they’re like old friends,” he says. “There are people working on this film who say ‘Toy Story’ was the first movie they saw when they were kids. But no matter how old we are, there’s the sense that we’ve all grown up with Woody and Buzz. It’s more than just a movie. These characters have been cemented in the fabric of people’s childhoods and their families.”

“The new technology of ‘Toy Story’ was what hooked people, but the characters were why they stayed with it, and cared,” says Pete Docter, Pixar’s chief creative officer who served as the supervising animator on “Toy Story.”

Stephany Folsom is a screenwriter raised in the mountains of Colorado. She has written for Disney, F/X, Warner Brothers, 20th Century Fox, Tri-Star, Lionsgate, Legendary, Amazon Studios and Marvel.

“As we wrote the film, for a while we thought of it as a twin protagonist story. Most kids relate to Buzz, which is funny because Buzz is basically deluded. I’m not sure what that says about kids. But in the end, the film is really Woody’s journey, dealing with his own jealousy and how that gets in the way of truly being there for his child. Woody became a very deep, multifaceted character, who has continued to surprise us by bringing emotional depth to four films. Most characters — having been created for just one film — tend to run out of steam at some point. I think Woody continued to be a rich mine of emotion because he’s basically echoing our own lives. The ‘Toy Story’ films are about toys, but they’re really about us.”

Filmmakers approached Toy Story 2 much like the audience did—with a built-in bond with Woody and Buzz. Says Stanton, “There are three balls that you have to juggle when you’re writing: plot, character and what I call drive. The hardest part is to come up with characters that are three-dimensional and worth spending time with for the entire film. In this case, I already knew who the characters were. With the main characters already established, we had the freedom to concentrate on the other two elements.”

Picking up where Toy Story left off, Toy Story 2 enjoyed the benefit of almost five more years of technological innovation and made history by becoming the first film ever to be entirely created, mastered and exhibited digitally.

Released in 2010, directed by Unkrich and produced by Darla K. Anderson, Toy Story 3 won Oscars for best animated feature film and best achievement in music written for motion pictures, original song (Randy Newman, “We Belong Together”). The film also won a Golden Globe and BAFTA for best animated film. It was the second Pixar film to be nominated for the best motion picture Oscar, and was nominated for best achievement in sound editing, as well as best writing, adapted screenplay. Nine years after its release, Toy Story 3 is Pixar’s second highest-grossing film worldwide, behind Incredibles 2. It is the fourth-highest-grossing animated movie of all time worldwide.

Since their debut on the big screen in 1995, the “Toy Story” characters have been beloved for generations. “Story and characters always came first,” said Lasseter of the franchise. “They drove everything we did. You can dazzle an audience with brand-new technology, but in the end, people walk away from a movie remembering the characters.”

Toy Story 4 embraces the theme of change yet again as Woody learns to navigate the new dynamics in Bonnie’s room and beyond. “I think what’s made Woody a really universal, interesting character is that he became the everyman,” says Stanton. “Woody’s this well-intended good guy who’s often his own worst enemy. But the power of Woody for us as filmmakers was that we could track him in real time along with our lives as parents with our kids.”

Part of the magic of the “Toy Story” movies is getting to view the world from a toy’s perspective. “‘Toy Story’ has a caricatured world where everything is designed from the toy’s point of view,” says director Josh Cooley. “We really wanted to expand the world as much as possible. So, going outside of the Tri-County area was huge. And we put the toys in places that they’d never been—places that would have new types of toys that would present new problems.”

While the look of the films is stylized, advancements in technology led to new opportunities. “With each film, our technology gets better and better, and we’re able to make things look more believable, more realistic,” says Cooley. “In this movie, there are shots that are staggeringly realistic. At times we have to pull it back—it’s too real. One thing we learned from the first three films was to keep the lighting to more stage-like so that it feels presentational.”