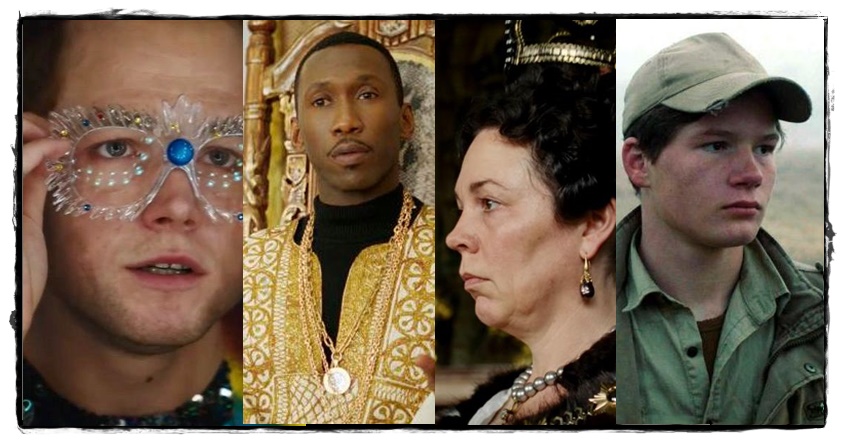 It’s that time of the year, to look back at films that made an impact. Here’s Daniel Dercksen’s Top 10.

Filled with imaginative flare and plenty sass, this is the kind of film you can escape into and let yourself go. Top notch performances by Taron Egerton and Jamie Bell, first-rate direction from Dexter Fletcher, and a crackling screenplay by Lee Hall makes this journey into the Elton John’s life story an unadulterated pleasure from the rousing opening to emotive ending. Elton’s transformation from the shy, working-class piano prodigy Reginald Dwight into a global music superstar was as tempestuous, outrageous, and plain dangerous as it was inspirational and brave. No regular movie was ever going to do it justice. Read more

Set against the backdrop of a country grappling with the valour and volatility of the Civil Rights Movement, a New York City bouncer from an Italian-American neighbourhood in The Bronx, and Dr. Don Shirley, a world-class Black pianist, confront racism and danger, and are comforted by generosity, kindness and humour as they challenge long-held assumptions, push past their seemingly insurmountable differences, and embrace their shared humanity.

Frank Anthony Vallelonga’s  heart-breaking true-life story shines a bright light what it takes to be human in a world filled with prejudice and hatred, with impassioned direction by  Peter Farrelly and screenplay by Vallelonga and Brian Currie, with outstanding performances by Vigo Mortensen and Mahershala Ali.  Read more

Greek director Yorgos Lanthimos creates its own very alive universe in this mind-bending exploration of female sexuality from the veiled world of Queen Anne (Olivia Colman), as her lifelong intimate friend and political advisor Lady Sarah, and Sarah’s penniless cousin turned social-climbing chambermaid Abigail steps into the breach to fill in as the Queen’s companion.

Though the film plays like a bedroom farce with global consequences, screenwriter Tony McNamara, who worked closely with Lanthimos from an original screenplay by Deborah Davis, shows how complicated love is, and how who you are as a person can be perverted and deformed by those complications.

The film is an absolute delight and turns history inside out.  Read more

If ever you wanted to step into the shoes of an artist, this inspiring biographical drama about the final years of painter Vincent van Gogh’s life poignantly dramatizes the controversial theory put forward by Van Gogh biographers Steven Naifeh and Gregory White Smith, in which they speculate that Van Gogh’s death was caused by mischief rather than it being a suicide.

Willem Dafoe delivers a magnificent performance as Van Gogh, with imaginative direction by Julian Schnabel, who also co-wrote and co-edited this masterwork.

This is the closest you will ever get to understand what it means to be an artist, and how art transforms the world we live in. Read more

This impressive feature debut from Greek-South African filmmaker Etienne Kallos, who wrote and directed the film,  vividly captures Janno’s world and the characters that live in it, with subtlety and hushed intensity; he does this without stylistic gimmicks or intrusion on his story, offering us a revered journey into the heart and soul of characters, we see what they see and share their anguish.   Interview with Kallos

Brent Vermeulen owns this role with dignity and bravura.

The passion and dynamism of Die Stropers is indisputable and offers exceptional discerning viewing, showcasing South African filmmaking at its best. Read more

Claire Denis makes her English-language debut with this daring futuristic exploration of what happens when a group of criminals are sent on a mission to travel on a spaceship toward a black hole while taking part in scientific experiments.

Featuring powerhouse performances by Robert Pattinson and Juliette Binoche, the film is presented in a nonlinear narrative and offers top notch drama as we are imprisoned with a group of criminals serving death sentences and are treated as guinea pigs.

At times shocking, it’s ultimately a soulful story of a father and daughter who are brought together through unusual circumstances and are forced to face their inner demons and reconcile peace. Read more

Even if you have seen writer-director Ari Aster disturbing Hereditary, and think you are fully prepared for Midsommar, this dread-soaked cinematic fairy tale, where a world of darkness unfolds in broad daylight, will stun your senses.

Aster explores a journey into the heart of darkness as an American couple (Florence Pugh and Jack Reynor), find themselves unexpectedly drawn into the world of a mysterious and dangerous primeval cult during a vacation getaway with their friends in a bucolic, hidden Swedish village.

This film from the visionary mind of Ari Aster gets my vote as the most terrifying film of 2019, as he pushes the horror-genre in new and unpredictable directions.  Read more

From Rudolp Nureyev’s poverty-stricken childhood in the Soviet city of Ufa, to his blossoming as a student dancer in Leningrad, to his arrival at the epicenter of western culture in Paris in the early 1960s and a nail-biting stand-off at the Le Bourget airport, this true story of an incredible journey by a unique artist who transformed the world of ballet forever is brilliantly directed by Ralph Fiennes and elegantly scripted by playwright David Hare.

Ukrainian dancer Oleg Ivenko delivers a great performance in this exceptional journey into the life of a ballet superstar who was an outsider and did not fit in anywhere. Read more

Directed, co-written and produced by Todd Phillips, Joker brilliantly captures the filmmaker’s original vision of the infamous DC villain, an origin story infused with, but distinctly outside, the character’s more traditional mythologies.

Phillips’ exploration of Arthur Fleck, who is indelibly portrayed by Joaquin Phoenix, is of a man struggling to find his way in Gotham’s fractured society.  Longing for any light to shine on him, he tries his hand as a stand-up comic, but finds the joke always seems to be on him.  Caught in a cyclical existence between apathy and cruelty and, ultimately, betrayal, Arthur makes one bad decision after another that brings about a chain reaction of escalating events in this gritty, allegorical character study.

The film allows star Joaquin Phoenix’s hypnotically raw performance to evoke the requisite emotions to take this journey with Arthur through the city’s—and eventually his own—darker side.  Read more

This splendid sequel to The Shining is brilliantly directed and edited by Mike Flanagan from his own screenplay based upon the novel by Stephen King.

The film perfectly reconciles the artistry of King and Kubrick (who directed The Shining). Ewan Mc Gregor offers an endearing performance as Danny Torrance, 40 years after his terrifying stay at the Overlook Hotel in The Shining.

Disparate worlds collide and implodes with maximum impact, emotionally and physically. It’s impact will haunt you long after watching it.  Read more

OTHER FILMS WORTH MENTIONING: Cats,  Ford v Ferrari, The Lion King, The Nightingale, A Rainy Day in New York, Mary Poppins Returns, Dominee Tienie, Seemeeu, Fiela Se Kind, Ad Astra, Scary Stories To Tell In The Dark, Spider-man: Far From Home. Knives Out and Once Upon A Time In Hollywood.

BACK TO FILM PAGE