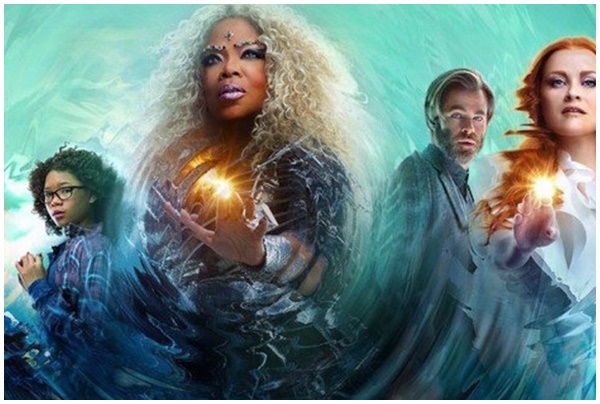 An incredibly emotional journey that takes audiences across dimensions of time and space, examining the nature of darkness versus light, good versus evil and, ultimately, the triumph of love.

Fifty years after Madeleine L’Engle’s young adult novel A Wrinkle in Time was first published and became an instant classic, executives at Disney toyed with the idea of bringing the book to the big screen when producer Jim Whitaker approached the studio about the property.

“’A Wrinkle in Time’ is an incredibly emotional journey, but it is set against a magnificent landscape and in a world that is beyond dramatic,” says Whitaker, whose production company is based on the Burbank lot and who has produced films for Disney including Pete’s Dragon and The Finest Hours.

“It is epic in its size and scope, but it is also deeply emotional and is entertaining and funny and an all-around great adventure,” says  Whitaker, a longtime fan of the book who felt strongly that an adaptation could work on a number of levels. The studio agreed, and brought him on to produce.

The film is directed by Ava DuVernay from a screenplay by Oscar winner Jennifer Lee and Jeff Stockwell.

Through one girl’s transformative journey led by three celestial guides, we discover that strength comes from embracing one’s individuality and that the best way to triumph over fear is to travel by one’s own light.

Meg Murry is a typical middle school student struggling with issues of self-worth who just wants to fit in. The daughter of two world-renowned physicists, she is intelligent and uniquely gifted, as is Meg’s younger brother, Charles Wallace, but she has yet to realize it for herself. Complicating matters is the mysterious disappearance of Mr. Murry, which has left Meg devastated and her mother broken-hearted. Charles Wallace introduces Meg and her fellow classmate Calvin to three celestial beings (Mrs. Which, Mrs. Whatsit and Mrs. Who) who have journeyed to Earth to help search for their father, and together they embark on their formidable quest. Travelling via a wrinkling of time and space known as tessering, they are transported to worlds beyond their imagination where they must confront a powerful evil force. To make it back home to Earth, Meg must face the darkness within herself in order to harness the strength necessary to defeat the darkness rapidly enveloping the Universe.

Catherine Hand has been closely involved with “A Wrinkle in Time” for years and soon joined Whitaker as a producer. She met Madeleine L’Engle more than 30 years ago when Hand was working for legendary TV writer-producer Norman Lear and remained close with the author until her death in 2007 when L’Engle bequeathed the book’s rights to her.

“We had marvelous conversations where I came to understand what the story really meant to her,” Hand explains. “I also gained a deeper understanding of many of the book’s different themes and came to appreciate how rich and textured it truly is.”

Hand continues, “I first read the book around the time of the Kennedy assassination, and I remember adults around me saying that hope had died, which was a hard thing for a young girl to hear. The book gave me a sense of hope and courage and helped me to understand that while evil does exist, it can be overcome.”

For the next two decades Hand pursued a film adaptation. “Catherine knows the emotionality of the material and saw the potential for incredible visual effects, plus she came to the table with a great deal of knowledge from her relationship with Madeleine over many years,” says Whitaker. “This film would not exist without her stewardship.”

In 2014, the studio approached celebrated screenwriter Jennifer Lee (“Frozen,” “Wreck-It Ralph”) about adapting L’Engle’s novel for the big screen, a prospect that thrilled her. “As a child, the book defied anything I had read at that point in my life in terms of imagination,” says Lee. “And it was my first introduction to a character like Meg—someone who is dynamic and flawed and unique, who goes through an extraordinary adventure and comes out stronger as a person.”

The producers had no problem entrusting Lee with the material. “Jennifer wrote one of Disney’s biggest hits in recent years, ‘Frozen,’ and the themes and ideas in that film have similar qualities to what ‘A Wrinkle in Time’ offers,” says Whitaker. “’Frozen’ has heart, it has humor, it is an incredible epic adventure and it has this really personal story about a girl coming into her own, and that’s what this movie is about too, so Jennifer had all the ideal qualities.”

“Jennifer knows how to write fully-rounded, winning characters,” continues Whitaker. “When you read a script of hers you feel like you want to be with these characters and you root for them to win, which, as a screenwriter, is hard to do. It’s like a very subtle craftsmanlike thing to always be able to make an audience feel like they’re on board with every character, no matter what.”

“’A Wrinkle in Time’ is a book that pushes your imagination to the next level,” says Lee. “The book doesn’t follow a traditional film structure in any way. It’s very ethereal, it’s very spiritual and it gets in your head, and when you have that kind of a relationship with a book, it’s okay because that’s what is great about reading: your mind fills in the gaps with what you want to see. But with film I have to make choices.”

She continues, “When I write about one of the planets visited by the children and describe what it looks like, there is a responsibility to try and evoke the same feelings from the book and to not limit what the book could do. Because this is Meg’s emotional journey, I have to get inside her head and interpret everything cinematically and in a way that’s just as evocative and just as emotional as it was in print.”

One year later, a finished script in hand, discussions as to who should take the helm of such a singular property began. The studio wanted someone with the skills, creativity and passion to bring the story to life…someone with the ability to tell both an intimate story and one with substantial issues and themes…someone unexpected.

Ava DuVernay was that someone. A celebrated director with film credits including the Oscar®-nominated films “Selma” and “13TH” as well as the NAACP Image Award-winning television series “Queen Sugar,” DuVernay easily met their criteria, but when the studio first approached her she did not initially leap at the opportunity. It wasn’t until she sat down and read the screenplay that she began to visualize the story coming to life on screen.

“The idea of ‘A Wrinkle in Time’ really captured my imagination once I read the script,” DuVernay remembers. “As a woman, the story of a female heroine at the center of a spectacular journey really resonated with me.”

She continues, “’A Wrinkle in Time’ is this beautiful stew of mystery, fantasy, adventure, science, romance, social commentary and spirituality. It’s not often that we see girls at the center of a story—and certainly not girls of color—amid all these different worlds and planets. It really is something out of my wildest imagination.”

Charlotte Jones Voiklis, Madeleine L’Engle’s granddaughter, found DuVernay to be an exciting choice to direct, saying, “She represents so many firsts, as did my grandmother, and I think the two mirror each other beautifully. One of the things my grandmother would always say is that we can’t pretend evil doesn’t exist…we just need to give children the tools with which to fight it. Ava understands that as well, and goes about it with a great clarity of vision and empathy.”

“Ava is a force of nature and willpower and vision, and that’s just a fact,” adds Whitaker. “She is grace in motion. She comes onto set and immediately puts everyone at ease and gracefully brings them to their best selves, and that’s what’s beautiful about working with her.”

DuVernay knew the path ahead of her would be a challenging one, as it was important that the film not only capture the emotional story of a young girl’s journey but also the details that have meant so much to so many for so long. “While certain aspects of the story have been updated or tweaked to be more contemporary or cinematic, our goal was to capture Madeleine L’Engle’s intention with the story,” DuVernay says. “Hopefully the film will make booklovers feel the same way they felt when they first read it, even if it looks a bit different, because my job is to super-size their memories and push them further.”

Director Ava DuVernay during the filming of A Wrinkle In Time

Thus began a lengthy process where the filmmakers researched, dissected and analyzed what they believed L’Engle’s true intentions were with the book and what she wanted her readers to feel. “I believe, as do people in her family and people who knew her, that Madeleine L’Engle was a passionate woman with moxie,” says DuVernay. “She was a brave artist, so we tried to challenge ourselves to be brave in our choices as well.”

“The reason why generations of people have gravitated toward this book is because it has an edge,” DuVernay continues. “It was on the edge of imagination and adventure in 1962, and our goal was to extend that edge through our design and effects to bring Jennifer Lee’s script to vibrant life.”

“A Wrinkle in Time” is a timeless tale, and the combined perspectives of DuVernay and Lee add rich layers to the powerful story in a way that lovingly preserves L’Engle’s voice and simultaneously brings a new vision to life.

“Meg Murry is an imperfect girl who takes a fantastic journey, not to become perfect, but to learn to embrace her flaws,” says DuVernay. “Through this journey we reflect on the big themes in life that we all share, regardless of where we’re from, what we look like and what we believe. We all know that love and hate, light and darkness, the themes of our very humanity, are something that we each grapple with, something we all share. It’s the human struggle…and the human triumph.”

For actor Storm Reid, it’s a story that sends a message to audiences to always love yourself. “It is okay to have good days and bad days because that is what makes us human beings, but do what you love and don’t let anybody tell you that you can’t do something,” she says.

But the concept of darkness versus light represents so much more than just the battle between good and evil—it is complacency versus activism, bravery versus cowardice, individuality versus conformity and any number of other ideas that are profoundly relevant in our society today.

“Extraordinary can often seem rather ordinary,” continues Whitaker. “And Meg Murry’s voyage shows us how we ultimately can come to a place where that lightness can overcome the darkness, allowing us to bring the best parts of ourselves to the world.”

“This is a story about belonging,” says DuVernay. “It’s about a girl who just doesn’t feel strong in her mind, body and spirit. But through this epic journey, she finds her strength and learns that the center of the universe starts inside her. It’s about Meg feeling like she belongs in the universe and has a mighty part to play…as do we all.”