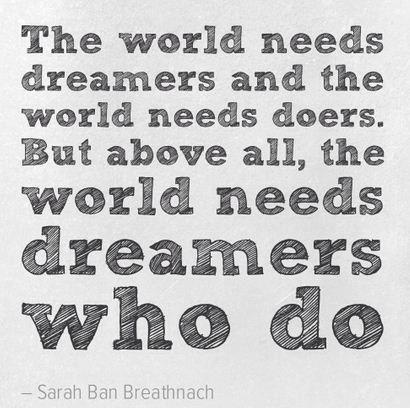 Dreams are good; action is best.

There are dreamers who can’t get things done and waste their talent and resources and doers who can’t dream, that reach too low.

The daydreamers sit down and think about what they could do but never follow through.

They are writers who constantly talk about how they want to write the next big film or book, or have an idea that will revolutionize the world. As time goes by, they will still be at the same point in life as they were before: the “I have an idea…” stage.

Dreamers have their feet in the air and their heads in the clouds.

The dreamer is a writer who lives or escapes to a world of fantasy or illusions and is referred to as a visionary or an idealist as opposed to a doer, or realist, a writer who seeks to represent the familiar or typical in real life rather than an idealised or romantic interpretation.

Doers have their feet on the ground and their heads in the sand.

What makes the doers distinct from others is the ability and the willpower to take advantage of opportunities that arise.

They have the ability to execute.

Daydreamers are wannabe-entrepreneurs; the ones who have the ideas and want everyone around them to put in the hard work. They think they have the next big thing but fail to realize that someone else out there probably has a similar idea.

Ideas in isolation are worthless — the value of an idea comes from its execution.

If you have an idea and don’t do anything about it, it holds no value whatsoever.

Just like in any other aspect in life, if no time or effort is put forth, return is minimal.

Maybe you’ve been called a dreamer your whole life—by others and by yourself. However, saying you are a dreamer or a doer is like saying you are good or bad. Nobody is 100 %  one way or the other, but they may lean more in one direction. It’s a spectrum, and the good news is that you can shift the paradigm so you’re a little more balanced.

Remember that being a doer isn’t necessarily better than being a dreamer. You need both to succeed.

Nothing beats and competes with passionate dreamers who turn their dreams in reality through relentless persistence and determined perseverance.

It is rewarding to turn a dream into reality by writing your story, and then turn words into action.

This is a big one, and not just because some things are scary, but because a lot of people don’t have the courage to face their fears. They choose to live “in denial,” or what Henry David Thoreau called “lives of quiet desperation.” And yes, it is a choice. Even if you’re not consciously aware, on some level, you know more about what you’re doing and why than you probably realize.

This is another big one. You hear a lot about procrastination, these days. There are all sorts of articles about how to do it less, be more productive, take the first step, and all that. It’s all bull. If you procrastinate, it’s for a reason, and that’s usually because you’re either scared or it’s not really your priority. To accomplish great things, that has to be your top priority. If not, you’ll find plenty of excuses not to make it happen.

We also hear lots of talk about circumstances keeping people – usually the underprivileged – from becoming successful. Since many, if not most, of the highly accomplished people, started with nothing, don’t let this become an obstacle.

Listen to dreamers for ideas. Listen to doers about execution.

If you’re really off-kilter and have a lot more dreamer tendencies, it’s time to take action.

Take action and sign up for The Write Journey

If you want to turn dreamers into reality, make an appointment your own personal writing coach