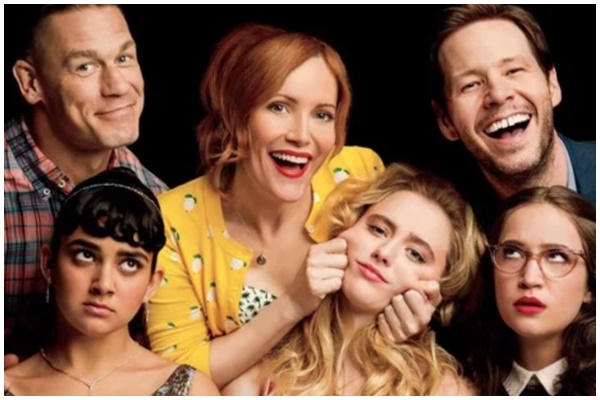 Blockers explores sexuality from several angles will prompt audiences of all ages to start a long-overdue conversation about sex, responsibility and respecting the choices of young women.

For decades, beginning with the groundbreaking Porky’s and extending to modern classics from Superbad to American Pie, guys have watched on-screen versions of guys like them boldly and bawdily celebrate the first time they have sex. It’s time the ladies have their shot to celebrate the story of their first time in Blockers.

With her directorial debut, Blockers, director Kay Cannon (writer of the Pitch Perfect series) has created a timely coming-of-age comedy that takes one of the most relatable rites of passages and hilariously upends a long-held double standard.

The film is written by brothers Brian Kehoe and Jim Kehoe.

Brian and Jim Kehoe are the comedy writing duo behind the feature The Wheelman for Disney with Andrew Panay producing, and have multiple feature projects in development, including You Complete Us at Endgame Entertainment.

The brothers are a go-to writing team for on-set polish and comedy work. Most recently they completed comedy punch-ups for Dog Days, directed by Ken Marino, and Just Getting Started, directed by Ron Shelton.

The Kehoes wrote and will direct Top of the Food Chain with Tyler Perry producing.

One of only a handful of women ever to direct an R-rated comedy for a big studio, Cannon shares a story about that one milestone none of us ever forget. When three parents discover their daughters’ pact to lose their virginity at prom, they launch a covert one-night operation to stop the teens from sealing the deal.

As nonstop helicoptering struggles with awkwardly letting go, the well-meaning trio shares in the raucous comedy that accompanies their kids’ biggest step into adulthood.

Lisa (Leslie Mann of The Other Woman, This Is 40), Mitchell (John Cena of Trainwreck, Sisters) and Hunter (Ike Barinholtz of Neighbors, Suicide Squad) are thrown together by fate—or rather their daughters becoming fast friends on the first day of kindergarten. As their inseparable girls grow into ride-or-die young adults, the trio of parents becomes de facto commiserates, sharing in their kids’ special moments, from birthdays and teen heartaches to first dances and now prom.

Their personalities are as different as their parenting styles: Single mom Lisa and daughter Julie (Kathryn Newton of television’s Big Little Lies) are more like besties who share everything with each other. Hard-core athlete and doting dad Mitchell puts in his blood, sweat and tears into rearing Kayla (Geraldine Viswanathan of EMO the Musical) with wife Marcie (Sarayu Blue of television’s The Real O’Neals) and keeping Kayla on the right track. After an ugly divorce, slightly unhinged Hunter dips in and out of life with daughter Sam (Gideon Adlon of TV’s American Crime)…only to crash her prom night with the goal of making her evening epic.

After stumbling upon a series of suggestive text messages that reveal a sex pact among the young women, the unlikely trio joins forces on a misguided mission to keep their daughters from making what they believe is the biggest mistake of their lives. But over the course of a wild night of car chases, butt-chugging contests and party crashing, they begin to see their daughters as the smart, determined and empowered young women they knew they’d become all along.

Getting The Party Started

As an Emmy Award-nominated writer and producer on NBC’s beloved series 30 Rock, Cannon has long held a reputation in Hollywood for masterfully crafting female characters in stories that are equal parts comedy and pathos.

The architect of the groundbreaking Pitch Perfect series has proved that comedies about strong, dynamic women could pull huge audiences of female fans at the box office. When looking to add more dimension to the female characters and storyline in Neighbors 2: Sorority Rising, longtime production partners Seth Rogen, Evan Goldberg and James Weaver immediately turned to Cannon.

“We’re a bunch of guys and the movie was about a sorority, so we knew we needed female input,” explains Goldberg. “We had a roundtable read with several women in the industry, and Kay’s ideas absolutely blew our minds.”

When developing Blockers, the team of producers felt it was paramount to again seek a female perspective.

Goldberg shares: “The original version of this script was about three dads, and one of the biggest changes we made was to create a female character—so it was a mother and two fathers—and we were convinced that should be at the film’s core. That change also made us realize that instead of someone like us, we needed a strong, female director like Kay Cannon to execute this project.”

Weaver agreed that Cannon’s specific voice and strong leadership would make her the perfect fit.

“As a first-time director, there are a lot of eyes on you,” he says. “Kay has this incredible amount of grit. She’s absolutely relentless in her work and keeps going in the face of any challenge in front of her.”

Cannon is not only the first woman to helm a movie at Point Grey Pictures—the production owned by Rogen, Goldberg and Weaver—she’s the sixth woman in the history of film to direct a big R-rated studio comedy.

“I had been itching to direct for a long time,” she confesses. “Women don’t get an opportunity like this often and I was excited for the chance.”

When making her directorial debut, it was also important to choose a film that would one day resonate with her daughter.

“Even though my daughter’s still young, I wanted to direct a film that she could eventually see herself in,” Cannon says. “I was waiting for a story that shows young women in a way that hasn’t been seen before.”

While on her first vacation in six years, Cannon received the script for Blockers and couldn’t put it down.

“I promised my husband I wasn’t going to work,” she admits. “I was up until two in the morning reading this script on my phone and laughing. It was really, really funny.”

The story also appealed to Cannon because it wasn’t a typical ‘high-school sex movie.’ “It shows young women taking control of their own sexuality, and confronts the sexual double standard,” she shares. “Right away, I wanted to do this.” For far too long, films have been made about young men’s firsts. With Blockers, young women finally have a rollicking film about their own sexual experience that’s equally relatable. The scene where the young women make the sex pact is a favorite for Cannon because it sounds like a conversation that could be overheard in any high school cafeteria.

“They’re silly; they’re crass; they curse,” she offers. “They talk about sex in ways that we haven’t seen young women talk about it, at least not in high school.”

Rogen is a master at capturing these ubiquitous high school moments in a relatable and funny way—he and Goldberg wrote the hit comedy Superbad based on their own experiences.

“Blockers also delivers big, giant comedy pieces that leave you in hysterics,” he says. Every teenager knows what it’s like to make a big decision, and Blockers shows how parents go through it twice: once for themselves and again through their children.

For Rogen the pact serves as the catalyst for this larger story.

“All of the parents have an emotional problem they are working out through their kids. It’s not about these young women having sex; it’s about parents losing control,” he explains. “Their daughters are leaving for college, and it manifests in these parents trying to stop them from growing up.”

In a world in which the pressures to say goodbye to your youth are an omnipresent element, the film acknowledges how terrifying it can be for parents to watch their kids grow up.

“You see the young women’s perspective and also their parents, and how different generations view sexuality,” says Goldberg. “It’s both sides of the coin.”

Known for balancing raunchiness with relatability, Rogen’s films have characters who genuinely care about one another—and Blockers is no exception. “These parents are crazy, but they truly love their daughters and want to protect them,” he says. “That unconditional love is the emotional core of this movie.”

One character Cannon took particular care of was Sam, who joins the pact in part because it’s what her friends are doing and she wants to share in the night. “When I was growing up, I didn’t have examples of mainstream, studio movies showing girls in a real, interesting relationship,” she says. “For the young women and girls who see this movie, it was important to show that it’s normal to feel confused and that there can be a struggle.”

Cannon hopes that this story that explores sexuality from several angles will prompt audiences of all ages to start a long-overdue conversation about sex, responsibility and respecting the choices of young women. She offers, “I didn’t talk about sex growing up at all. It was abstinence and that’s it. Maybe you wouldn’t want to see this movie sitting next to your parents because there are a lot of dirty jokes, but my dream for this film is to get people laughing and then talking. I would love that.”