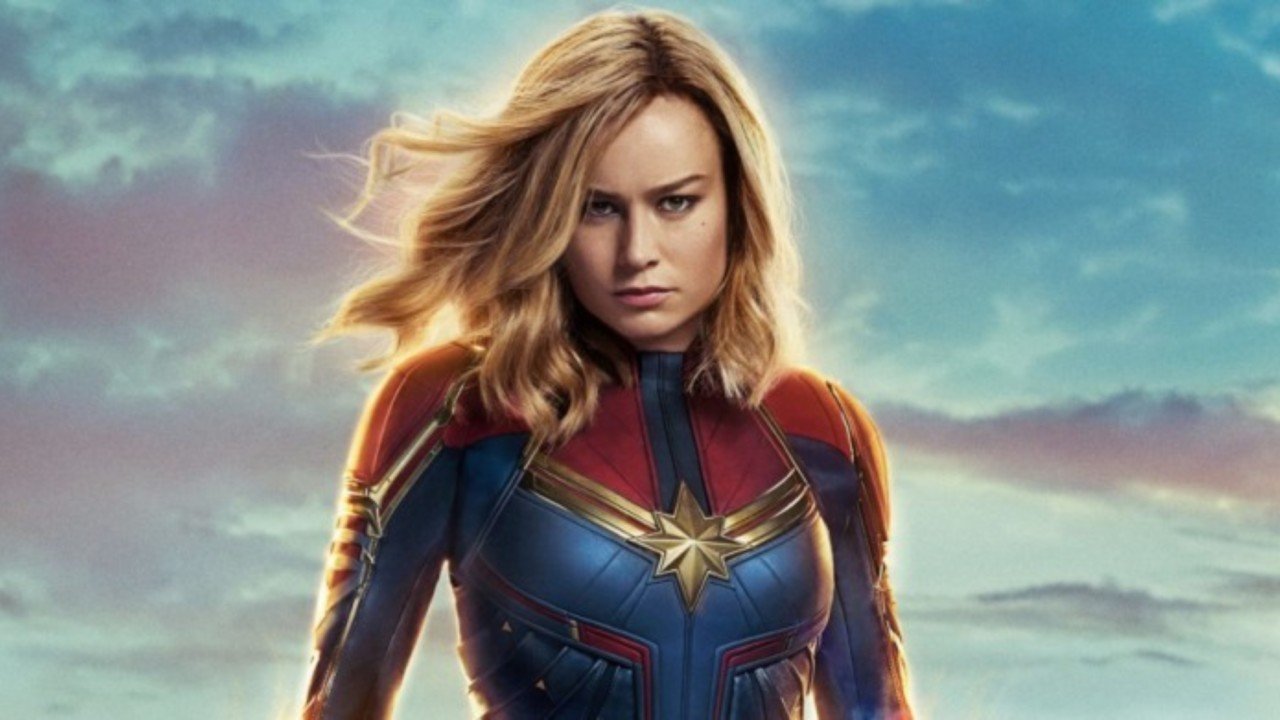 With the release of Captain Marvel, Marvel Studios launches its highly anticipated, female-led franchise into the ever-growing Marvel Cinematic Universe.

Zooming in on a previously unseen period in the history of the Marvel Cinematic Universe, the film introduces the MCU’s first stand-alone, female-franchise title character—Carol Danvers aka Captain Marvel.

Based on the beloved Marvel comic-book series, first published in 1967, Captain Marvel is set in the 1990s.

Filmmakers decided to set Carol Danvers’ story in the 1990s—a first for the MCU. In this pre-Avengers time period, cell phones were just phones, pagers were in, internet cafes were the rage and video rental stores dotted the landscape.

“We were really intrigued with the idea early on to explore a time in the MCU that we hadn’t seen before in the ’90s,” says Producer Kevin Feige. “It also allowed us to tap into ’90s nostalgia, which, having grown up and been through college and graduated college in the ’90s, makes me feel old. And now there’s this nostalgia for everything ’90s, and it felt that it would be fun to also tap into that period stylistically and cinematically with the ’90s action films.”

Explaining what sparked the directing duo’s interest, Boden says, “One of the things that drew us to the character was the fact that she was a really powerful, interesting, unique and independent female character. We are so excited to be telling this story about somebody who’s not just powerful but also really complicated and human.”

“In researching the project, we started digging into the comics, and we just fell in love with the character, her voice, her grit and her humor,” adds Ryan Fleck. “We were trying to figure out how to do this, because we come from a very indie background, but we were aware that Marvel had been making some bold hiring decisions before us with Taika Waititi directing ‘Thor: Ragnarok’ and Ryan Coogler directing ‘Black Panther.’ Both are great filmmakers who come from indie filmmaking and very character-based storytelling. When we saw they were hiring directors like that, our interest was really stirred because they’re not just after the big spectacle or the big explosion.”

Captain Marvel sidesteps the traditional origin story template, with Carol Danvers (Brie Larson) already possessing her superhero powers. Leaving her earthly life behind, she joins an intergalactic elite Kree military team called Starforce, led by their enigmatic commander, Yon-Rogg (Jude Law). But after Danvers has trained and worked with the Starforce team, and become a valued member, she finds herself back on Earth with new questions about her past. While on Earth she quickly lands on the radar of Nick Fury (Samuel L. Jackson), and they must work together against a formidable enemy in the form of the Skrulls—the notorious Marvel bad guys made even more dangerous by their shape-shifting abilities—and their leader, Talos (Ben Mendelsohn), who is spearheading a Skrull invasion of Earth.

“We’ve always had powerful female characters and heroes in our films. But having a female Super Hero franchise title character for the first time feels overdue, and it’s something that we have been excited about for a long time, and we can’t wait to deliver it to the world.”

“Carol Danvers has always been a character fans have had a lot of love for, and she has a really unique and cool voice in the comics,” adds executive producer Jonathan Schwartz. “What we wanted to do with ‘Captain Marvel’ was to give Carol a chance to carve out her own space in the universe and not fit her into the existing continuity or have her show up suddenly on the scene, but really give her a lot of rich, deep connection to the core of mythology of the MCU. It’s exciting that we get to introduce fans to this amazing character who has such a deep and abiding fan base in the Marvel Universe.”

Developing The Story and Screenplay

With many years of source material in the comics, the filmmakers were drawn to a run of comics by Kelly Sue DeConnick, whose take on the character would be the general inspiration for the film.

Executive producer Jonathan Schwartz explains why that particular run of the comics was a great jumping-off point in developing the story and screenplay.

“Much like the Abnett and Lanning comics formed the foundation of the ‘Guardians of the Galaxy’ films, from the standpoint of character and voice, we decided to go back to writer Kelly Sue DeConnick’s run on ‘Captain Marvel,’” explains Schwartz. “That run dealt with Carol Danvers in a great way and really made her a fully realized character for the modern era in which she finally assumed the mantle of Captain Marvel. There was a voice and tone for that character that felt very cinematic, and we were really excited to dig into and bring to life on the big screen. There were also a few other aspects that we were excited for in that run. One of them being that she gets to be the bridge between the cosmic side of the universe and the earthbound side of the universe.”

Comic-book writer Kelly Sue DeConnick explains the inspiration for her take on the character in her run of “Captain Marvel” comics. “My dad was in the Air Force, and I grew up on the base,” says DeConnick. “When I pitched Marvel to write a run of comics, I basically said my inspiration was Captain Marvel or Carol Danvers as Chuck Yeager. For me, it was about the metaphor of flight and really kind of exploring that and escaping the bounds of our fears and our doubts about ourselves. That was thematically a lot of what I wanted to inject into the character.”

For the comic-book writer, the news that Captain Marvel was going to the big screen was music to her ears. “When they first announced this movie,” says DeConnick, “I knew it would be a huge step forward and would be important in the cultural zeitgeist. The message that it sends to little girls and women of all ages is something that renders me inarticulate, truly.”

DeConnick adds, “For me, and hopefully many others who will see the film, she will not just be a female superhero; she will be looked upon as simply a superhero.”

Part of what made Marvel filmmakers excited about Captain Marvel was how Black Panther took on serious themes and issues about being black. Similarly, “Captain Marvel” deals directly with feminism and equality. As Jonathan Schwartz explains, “We were all really excited about finding the story and having it infused not only with fun sci-fi action and adventure, but with very real issues like female empowerment and equality, which is one of the key themes of the film.”

For Larson, being the lead of the first female Super Hero franchise presented an opportunity to put herself in the forefront of breaking new ground in the Marvel Cinematic Universe. “It’s such an honor to be part of the Marvel Cinematic Universe, and be part of this legacy of characters and storytelling that is so incredibly meaningful to people,” says Larson. “These films are part of what’s shaping our culture, who we are, what morals we value. I don’t think that I fully understood the scope of what it meant in the cultural zeitgeist until the announcement came out that I was going to be playing Captain Marvel. I’ve slowly started to grasp the vastness and gravity of it all.”

Boden adds, “We spent a lot of time in a dark room reading by ourselves and learning about this Carol Danvers. We really sparked to the Kelly Sue DeConnick iteration of the character when she took on the mantle of Captain Marvel. It was also very much what Kevin Feige and Jonathan Schwartz were talking about in terms of the character that they were excited to dig into. The character is flawed in certain ways and wildly human even though she is a superhero. She has a sense of humor as well as real grit. She’s sometimes a little bit cocky and sometimes a little bit irrational and doesn’t make the best decisions for herself.”

“It’s indescribable to work with creative people, especially people who make movies. It’s such a thrill. And I keep saying to myself I can’t believe this is me. I can’t believe I lucked out this way. But it’s something you never forget. I remember every cameo I’ve done since the first one. And I think I’m a very lucky guy.”—Stan Lee, 1922-2018

Anna Boden and Ryan Fleck (Director/Story by/Screenplay by) met on the set of a student film when Boden was studying film at Columbia University and Fleck was a student at New York University film school. Together they began their collaborations with the documentary “Young Rebels.” In 2006 Fleck and Boden wrote, and Fleck directed, the feature film Half Nelson, wrote and directed the independent film Sugar, It’s Kind of a Funny Story, and Mississippi Grind. On television, Boden and Fleck have directed episodes of HBO’s Room 104, Showtime’s Billions, The Affair and The Big C. Fleck has also directed three episodes of Looking.

Geneva Robertson-Dworet (Story by/Screenplay by) is one of the industry’s leading female genre writers, having written for Marvel, DC and other major franchises such as Tomb Raider, Sherlock Holmes, Transformers and Dungeons & Dragons. She is currently adapting Artemis, Andy Weir’s follow-up to The Martian, with Phil Lord and Chris Miller directing. Her work has twice appeared on the Black List (the annual list of the best unproduced scripts), most recently for “Ares” (produced by Dan Lin). Last year, Robertson-Dworet launched the production company Known Universe with fellow top genre writers Nicole Perlman and Lindsey Beer. The female-led production company’s mission is to break boundaries for female genre writers and other diverse voices.

Nicole Perlman (Story by) is best known for having co-written Marvel Studios’ 2014 blockbuster Guardians of the Galaxy. After graduating from NYU’s Tisch School of the Arts in 2003, Perlman was featured as one of Variety’s 10 Screenwriters to Watch, named one of The Playlist’s Ten Screenwriters on the Rise, and placed on the Black List. Since then, Perlman has gone on to win the Tribeca Film Festival’s Sloan Foundation Grant for Science in Film, a Hugo Award and the Ray Bradbury Award for Outstanding Dramatic Presentation. Perlman recently stepped behind the camera as part of a Cinereach Directing Fellowship. Her short science-fiction film, “The Slows,” premiered in October at the New York Film Festival and at Fantastic Fest in September. Perlman is proud to serve as a Creative Adviser for both the Sundance Institute’s Story Labs and SFFILM.

Nominated for a best screenplay Oscar for the Pixar blockbuster Inside Out, Meg LeFauve (Story by) won an Annie Award for that screenplay. She also wrote Pixar’s The Good Dinosaur. LeFauve is currently writing a series for Hulu and the animated film My Father’s Dragon for Netflix and Cartoon Saloon. LeFauve began her film career as a producer and president of Egg Pictures. LeFauve has been a consultant to Screen New South Wales and Screen Australia and has been a mentor at many writing labs, including CineStory Script Sessions, the Meryl Streep lab and the Sundance Creative Producing Lab. LeFauve taught at AFI and served as co-chair of the Graduate Producers Program at UCLA’s School of Film and Television, where she taught master-level story and development classes for over seven years. Raised in Warren, Ohio, LeFauve graduated from the Syracuse University Newhouse School.