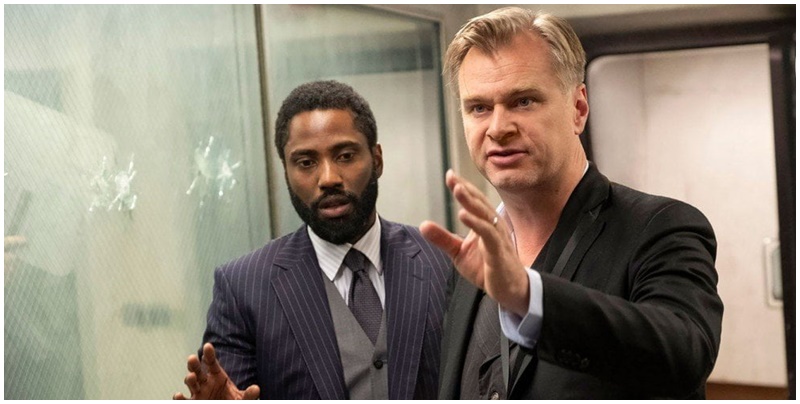 Most people see time as an unalterable dynamic of our existence, but in the hands of filmmaker Christopher Nolan, it becomes a compellingly tractable thread, able to be bent, twisted, juxtaposed…or inverted in Tenet, an original sci-fi action spectacle.

Nolan is well known for keeping story details close to the vest, preferring audiences to discover the twists and turns of the plot as they are revealed on the big screen.  So, in describing the story, he cryptically shares, “‘Tenet’ is an espionage thriller with a Protagonist at its heart, who is inducted into a more-secret-than-secret organization known as Tenet.  Often these types of characters are portrayed as being very hard and cynical.  Yet, there is a degree of selflessness and self-sacrifice to what they do and what’s expected of them that speaks to a different set of ethics and an accountability and responsibility to their fellow man.  John David Washington and I both felt that we had an opportunity here to tap into those attributes more, as a motivation for him doing the most extreme things, all for the greater good.”

Tenet was a concept Christopher Nolan had been contemplating for a while, noting, “I think, as a filmmaker, you have a set of ideas—things in the back of the drawer that can take decades to come to fruition.  The time has to be right in all kinds of ways.  For me it was a combination of wanting to get back to a broader sense of filmmaking, following ‘Dunkirk,’ and taking audiences around the world to more places than we’d ever been.  I also felt ready to take on the spy genre, which I’d always intended to do.  I grew up loving spy movies; it’s a really fun and exciting branch of fiction.  But I didn’t want to do this type of film unless I felt I could bring something fresh to it.  The simplest way to explain our approach is to say what we did with ‘Inception’ for the heist genre is what ‘Tenet’ attempts to bring to the spy movie genre.”

Emma Thomas, Nolan’s wife and producing partner, who helm their own production company, Syncopy, and partnered with Nolan to produce the global action thriller, remarks, “‘Tenet’ was so challenging, I don’t think we would have been able to pull it off ten years ago, so I feel this story emerged from Chris’s brain at just the right time.  This isn’t just the most ambitious film in scope that Chris has made from a production standpoint, but also in the ways he has pushed the narrative beyond the limits of what he’s done in the past.  When you look at the movies in the trajectory, it does feel like each of them builds on the last, so this film is definitely a product of the many years of experience we have at this point.”

John David Washington ( BlacKkKlansman), who stars as the character known only as the Protagonist, says that while “at the core of it, ‘Tenet’ is about a man trying to save the world,” the intricately woven plot also explores some of our most firmly held precepts.  “The movie challenges our traditional ways of interpreting time, interpreting what we perceive is real, our learned behaviors,” he continues.  “There’s a lot more going on.  I had never read or seen anything like this before.  Nobody has.  Chris deals head on with how we understand the physics of time, all through the lens of this character.  I don’t know what his fascination with time is, but I love how he deals with it in his movies.”

Thomas observes that, in some way, everyone shares Nolan’s fascination with time.  “We’re all a little bit obsessed with time, aren’t we?  It’s something that, whoever you are, wherever you’re from, whatever your life experience is, you know you can’t do anything about it.  It rules you.  I can’t really speak for Chris, but that’s my perspective on it.  It’s interesting because, given the fact that time is universal, it’s also something that you feel very subjectively: you know, kids feel time very differently from adults.  I feel like it’s speeding up immeasurably.  And then, during this pandemic, our perception of time has been a whole other thing…days have felt like weeks and months have felt like minutes.  It’s been very weird.”

Interestingly, it turns out that the notion of inverting time is not outside the realm of possibility for modern physicists, having to do with the law of entropy, which, in the most basic terms, states that all things trend toward disorder.  “Every law of physics is symmetrical—it can run forwards or backwards in time and be the same—except for entropy,” Nolan explains.  “The theory being that if you could invert the flow of entropy for an object, you could reverse the flow of time for that object, so the story is grounded in credible physics.  I did have (physicist) Kip Thorne read the script and he helped me out with some of the concepts, though we’re not going to make any case for this being scientifically accurate.  But it is based roughly on actual science.”

Thomas admits that when she first read the script, “I was a bit daunted by the scale, but the premise was so original and intriguing.  A few of Chris’s films have been quite tricky to parse just reading it on the page, but then you know it’s all going to make sense when you see it visually.”

In fact, Nolan points out, the visual medium of film is, in very real terms, the only manner in which specific facets of the story could have been accomplished.  “The thing about the camera is that it actually sees time.  Before the motion picture camera existed, there was no way for people to conceive of things like slow motion or reverse motion.  So, cinema itself is the window onto time that allowed this project to come to fruition.  It is literally a project that only exists because the movie camera exists.”

Nevertheless, the camera’s singular ability to depict temporal variations would not be enough.  The director knew that realizing his vision would require “a ruleset that was not as simple as reversing the camera or things going backwards.  There is an interaction between the direction of time and the environment we’re in: how things move around us and even the air we breathe,” he clarifies.  “The notion of inversion is an asymmetrical one, so the ruleset was complicated and had to be addressed in more complicated ways.  That meant a variety of techniques, from cast and stunt performers being able to perform fight scenes and running and walking in different directions, to vehicles that would drive forwards or backwards in various configurations so that we could, shot to shot, completely change the technique we were using to create the particular visual.  Something we’ve learned over the years: if you can have a range of different techniques allowing you to keep changing the trick that you’re using shot to shot, it becomes much harder for the audience to be pulled out of the film.  It’s much more immersive.”

To amplify an immersive moviegoing experience, Nolan once again relied on IMAX cameras and large-format film.

“I’ve been working with the IMAX format for years now,” he says.  “It has this extraordinary power in terms of how deeply it can take the audience into the story.  With a story as entertaining and fun as this one tries to be, we really felt that we wanted to wrap the movie around the audience and take them on a ride.”

Kenneth Branagh, who plays the malevolent antagonist of the film, Andrei Sator, previously worked with Nolan on “Dunkirk.”  He comments, “‘Tenet’ is a hair-raising, high-stakes thriller from an extraordinary filmmaker.  I think Chris makes a couple of contracts with the audience.  One is to absolutely, positively entertain them; there’s no question about that.  But I think the other contract he makes is with their intelligence, their interest, and their passion.  This is a man who is about the telling of the story through cinema.  I can almost feel in this project a re-affirmation, a declaration, of how exciting it can be to be in a darkened room, with massive images, for a story that that kind of treatment supports and deserves.  Along with Emma—that’s a pair of very savvy producers—they know logistically how to make an ambitious movie work.”

“This could not be more of a Chris Nolan movie,” adds castmate Robert Pattinson, whose character, Neil, is teamed with the Protagonist.  “There is such a singular vision to every one of his films and making this one was a spectacular feat in every way.  It’s pretty amazing…there’s literally nothing comparable.”

The filming of “Tenet” took the filmmakers, cast and crew to the countries of Estonia, Italy, India, Denmark, Norway, the United Kingdom and the United States.  And Nolan says the global nature of the shoot befit the story.

“The international component of ‘Tenet’ is very important because it’s about a threat to the entire world—to existence as a whole—and those stakes are integral to the drama.  So, I think having that global feel is crucial to the rhythm of the film and the building of scope and scale.”

The settings are essential to the director, who has long preferred to capture the action in-camera—eschewing greenscreen in favor of practical sets and relying more on special effects than visual effects.

“I like blurring the boundaries between the photography of the actors, the situations they’re in, and the more improbable elements of the film, whether it’s an airplane crashing into a building or a sense of time being distorted.  If there isn’t this divide between the fantastical and the character base, I believe you get a much more even tone to the film and you can keep the audience more engaged.”

“I’ve been making films for a long time now, and I am very aware of the medium I work in,” Nolan says.  “It’s what inspires me and affects my creative choices in every possible way—as I’m writing the script, as I’m thinking about what it’s going to be, as I’m casting it…  Everything is about that larger-than-life experience that we’re intending to give the audience.  Every decision is made with the idea of an audience coming together in a movie theatre to watch it on a big screen.  That affects every choice we make and everything we do.”

“The production was challenging, there’s no question,” Thomas asserts.  “But we were surrounded by the absolute best in the business and we felt great about the huge talents who were helping us communicate the story and bring the characters into being.”

Born in London, Christopher Nolan began making movies at an early age with his father’s Super-8mm camera.  While studying English Literature at University College London (UCL), he shot 16mm films at UCL’s film society, where he learned the guerrilla film techniques he would later use to make his first feature, Following.  The noir thriller was recognized at a number of international film festivals prior to its theatrical release.

Nolan first gained international attention with the 2000 independent feature Memento, which he directed from his own screenplay, based on a short story by Jonathan Nolan.

In 2010, Nolan captivated both critics and audiences with the sci-fi thriller Inception, which he directed and produced from his own original screenplay., which won four Academy Awards, including two for Nolan, for Best Picture and Best Screenplay.