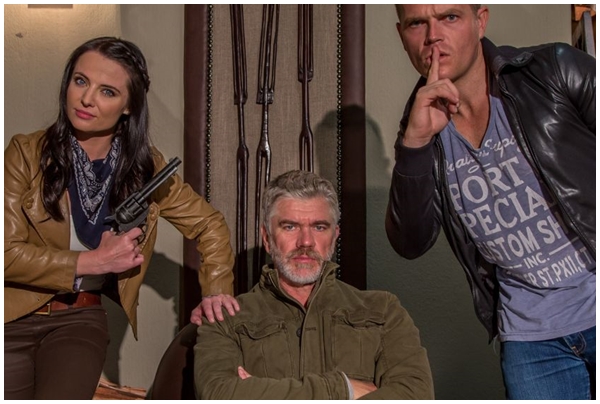 The Roar forms part of the newly launched Purpose Campaign, that aims to inspire young and old to discover their life-purpose, to make a meaningful difference in the world.

Film maker, Frans Cronje, who made movies like Faith like Potatoes, Hansie, Baroudeur and Born to Win brings us The Roar, that forms part of the newly launched Purpose Campaign, that aims to inspire young and old to discover their life-purpose, to make a meaningful difference in the world.

The Roar tells the story of “Louise” who is on a journey to discover her purpose. She wants to become a Broadway star in New York, but her father wants her to get married and live in the South African bushveld. To make matters worse they find themselves surrounded by a vicious band of rhino poachers.

Face To Face with Frans Cronje

What inspired you to produce The Roar?

I have a passion to inspire people to live purpose driven lives. Two years ago, we had to choose a theme for our next movie. It was then that we decided to plan The Purpose Campaign and produce The Roar. I had written an outline for a “purpose-themed” movie a few years prior to that. I used that outline to write The Roar. The initial title of the movie was “In which jungle do I belong?”. I find it sad to see that very few people know what their purpose is and where they belong.

Where do you start when you produce a new movie?

Most people start with a story or idea. I start with a theme or ministry plan. From there I think of the most creative way in which to tell a story that illustrates the theme. Then I write as many scenes as possible on sticky notes and paste them all over my office wall. Only then do I begin to write the screenplay. We often re-write the screenplay ten or twelve times before we start filming!

How did you select the cast for The Roar?

We wanted the main cast to be singer/actors. The owners of Finesse magazine introduced me to Almarie du Preez who is a beautiful actress and at the time she was leading the praise and worship at a mega church in Pretoria. She has a beautiful voice. I have been friends with Heinz Winckler for a long time and he was an easy choice. Two years ago I met a stage actress/singer from the USA, Shaullanda Lacombe. She played one of the hyenas in the Disney stage musical, The Lion King.  I told her as soon as I have an opportunity I would like to use her in one of our movies. She was great! I also met another American actor/comedian Torry Martin a few years ago at a conference in Atlanta. Torry played a fantastic humorous part in our movie. This is the second time I used Greg Kriek in one of our movies. I think he is one of the brightest young actors that we have in our country! I heard that Eugene Khumbanyiwa, who played the antagonist in District 9, was a Christian and asked him if he would be interested to play in one of our movies. He said yes and it was a great pleasure to work with him.

What was it like to film on location in the bushveld and New York?

We filmed at the Matingwe Game Reserve in the Waterberg. It’s such a beautiful location and ideal for an African adventure movie. In order to film a credible scene with a dangerous lion, we used the services and lions of the world famous “lion whisperer” Kevin Richardson.  Kevin is a great guy and it’s awesome to see how he communicates with the lions.

It’s always great being in Manhattan. It is the first time that I have scenes of America in one of my movies. However, the main Broadway scene was not filmed in New York, but rather at the beautiful Atterbury Theatre in Pretoria. Torry Martin had an interesting African experience when he walked out of the theatre a few minutes after 8 men robbed a jewelry store having fired shots from AK47’s. After that and a “boomslang” (tree snake) next to his room at Matingwe, he was just about ready to head back to Nashville.

It was not all fun and games on set in the bushveld. Most of us had to sleep in tents for three weeks and some mornings the temperature was below zero. Being in such a remote area also meant very weak cell reception and often no internet.

What was the biggest challenge on set?

Not having a final screenplay when we started filming!!! A few factors contributed to the fact that we still needed to polish the screenplay, so Torry Martin took it upon himself to re-write much of the dialogue. This meant that we often only saw the re-writes as we walked onto set. Not ideal, but miraculously it all worked out in the end!

What would you like people take away from the movie?

Definitely PURPOSE! That is the main theme. I would like to get feedback a few months or years from now and hear stories of how the movie inspired people to live purpose driven lives.

We also touch on the problem with rhino poaching, so hopefully we can contribute to the solution somehow.

And then parent/children relationships. There is a strong father/daughter relationship in the movie.

What is your own purpose?

Telling stories that inspire! And to me that also means portraying aspects of the Gospel. I believe that there is a God who created us. I believe that He loves us and wants us to know Him personally. I strive to portray this in a non-preachy and entertaining way. I see myself as an encourager.

What does The Purpose Campaign mean to you?

I see The Purpose Campaign as an awareness movement that will be a trigger to community transformation in South Africa. It’s not an event or organisation. It belongs to everyone who has a passion to see people live purpose driven lives. When individual people know their purpose, their communities are healthy. The opposite is also true.

How did you find your own purpose?

I asked God to show me why He created me. Then I analyzed my own group of talents and combined it with my passions in life. That combination helped me realize who I am and where I belong. For the last 20 years I have lived a purpose driven life and it makes all the difference. Before that I strived for success with selfish ambition. This also inspired me to write a book called Discover your purpose.

Sleep!!! Hahaha!!!! But, once this Purpose Campaign is over, we plan on going into pre-production on an exciting Biblical epic movie, set in Samaria and Rome two thousand years ago. We have built up a “super creative” and vibrant young team of creative people that will bring a new level of excellence to our movies. I am truly excited about the future!