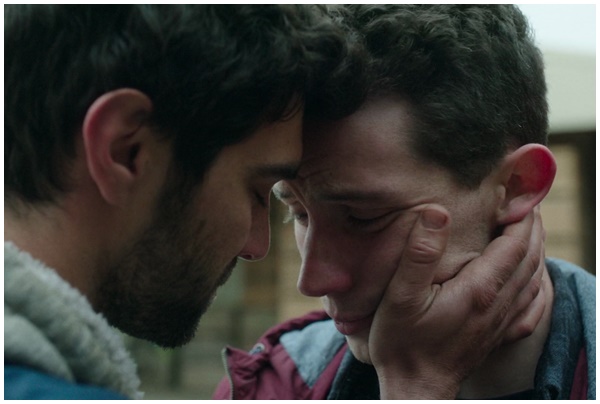 “I was interested in telling a story about two men, about masculinity, I guess, or the way in which men communicate physically and emotionally..”

Francis Lee didn’t make the masterful God’s Own Country because he thought it would be a sure fire hit or stoke enough controversy to get him recognized as a director.

The first time filmmaker wrote and directed the soaring queer love story, which revolves around the budding romance between Yorkshire sheep farmer Johnny (Josh O’Connor) and Romanian migrant worker Gheorghe (Alex Secareanu), because the story was burning inside of him and he needed to get it onto the page and onto the screen, regardless of who saw it.

A dig into the nature of humanity from a director already fluent in the language of brutality and tenderness. A stunning love story that in its finest moments is pure poetry..

Bringing “God’s Own Country” to the big-screen has been a 20-year long journey for Lee. Before taking the plunge and moving behind the camera Lee was an actor. However he insists he was never any good, as he was terrible at auditions, and was always just lucky enough to get work. Lee was never able to express himself as an actor, and after several years of boredom and frustration he suddenly thought, ‘I’m going to have to stop acting. And I’m going to have to do this because, ‘Either do it or shut up’.”

A keen photographer and lifelong storyteller, writer-director Francis Lee is used to viewing the world through a lens. A largely self-taught filmmaker who resisted the ‘rules’ of writing – though found truth in the subtext of Chekov’s plays – he has come to the job of writer/director via a handful of shorts following a modest acting career.

He wrote a script on spec and showed it to a friend,  who he showed it to his agent. The agent loved it and encouraged Lee to to enter a funding scheme run by the British Film Institute and Creative England. While he was ultimately unsuccessful, he got down to the final three submissions and the BFI were so taken with God’s Own Country that they later offered to support the film anyway.

Lee’s original original urge to make “God’s Own Country” came from the Yorkshire “landscape,” especially because he had such a “love hate relationship” with his home.  “On the one hand I saw it as totally creative and expansive and it always felt like home. But on the other it felt problematic and difficult and brutal and cold and wet and inaccessible and wet. And then it was just trying to work that out and find some peace within that.” All of which he then mixed together with “falling in love and making yourself vulnerable for somebody else….”Those kind of things collided, and that’s what I wanted to explore.”

This approach clearly worked a treat, because audiences quickly connected with “God’s Own Country.” After premiering at Sundance, it screened at the Berlin International Film Festival, and has been the “biggest selling film of the year” in parts of Northern England. In Lee’s home town Halifax it not only outsold “Dunkirk” but has become “the biggest selling film they have ever had,” with viewers going to see it five or six times.

God’s Own Country, with its story of two young men who fall for each while working on a Yorkshire farm, merges rootsy British realism with the thrill of romance, even if it’s to be found on on a cold fell in lambing season. By turns tender and sexy, the film is also a significant addition to the queer cinematic canon, and a part of the lineage of queer cinematic greats.

Tell us about the 5 years it took to make the film?

In all it took five years to make, but the bulk of that time was waiting around. The wheels of the film industry turn very slowly, but fortunately I am very patient. That’s probably no bad thing since when we finally got the go ahead in May 2016 we had just missed lambing season so we then had to wait another entire year.

I was determined that the action should be as authentic as possible and  cast newcomers Josh O’Connor and Alec Secareanu as the central characters and brought them to Yorkshire where they experienced farming life first hand. I knew that it was going to be a challenging shoot for the young actors and I wanted to give them all the support I could. Three months before filming began we started work on their characters and by the end they knew every breath they had taken from birth to the point we see them on film. “We also got them work placements on farms where they learnt everything from the lambing to the dry stone walling. They had to be so comfortable in that landscape that everything came as second nature and both of them developed really strong bonds with the farmers, so much so that Josh is still in touch with one of them.

How did you see Johnny’s sexuality in the film?

In terms of the character’s sexuality, I think he’s fine with who he has sex with. The difficulty comes in him moving forward and not just having sex but having an actual relationship and the journey he has to go on to achieve that because he is very closed emotionally for lots of reasons.

Why did you want to write a rural working class story?

That’s my experience. In terms of the cinematic landscape I’ve seen a lot of working class stories but they are usually urban and they are usually about benefits or problems with drugs or gangs. I’d never seen the world I knew depicted in the way in which I saw it. That’s where I come from, that’s where I live.

How did that feed into the visual mood?

It was important to depict the landscape in a way in which I’d not seen in a film before; that it was cold, wet, windy, that’s it’s hard work, that there’s mud. There’s only one landscape shot in the film and that’s because it’s the first time that Johnny sees the landscape. The rest of the time he doesn’t see it. That’s because of the way he has to live and work here and it becomes very oppressive.

The film has been compared to Brokeback Mountain. But isn’t there already references to Ang Lee’s film within yours?

Yeah, I love Brokeback Mountain I think it’s a wonderful film, I love the book. I’m not going to tell you where those references are but I was very aware that there would be comparisons and rather than shy away from that I wanted to celebrate that.

How did the character of Gheorghe come about?

When I gave up acting I got a job in a scrapyard and worked there to make money so I could make short films. One of the guys working there who is a friend of mine was from Romania. He’d come here to better and change his life. He spoke very eloquently about coming to this country, about the xenophobia he’d experienced. I was shocked and ashamed of our country and that kind of attitude towards people. I wanted to look at an outsider coming into this community, coming into it from a totally different perspective.

You filmed God’s Own Country before the EU referendum but the film carries a certain charge when viewed post Brexit. Did politics come into play at any point?

We didn’t re edit it or rethink the film after the referendum but it just made the story and the world and the characters more poignant. It just became apparent that what could potentially happen now is that two people could fall in love from two different countries in Europe and they can’t be together.

Tell us about the characters

I am very precise and the script was very detailed. Every look, every glance, every touch, every animal thing, those things can’t change, but then we have to discover how they got to this point, and that’s where Josh and Alec’s input came in. They were very creative about building these characters from the moment they were born until we first see them in the film.  Johnny and Gheorghe are men of little words, though the Romanian man is more emotionally open. It’s in this regard that God’s Own Country’s most beautiful moments land in the unspoken beats between them, especially a moment’s silence on a glowing hilltop.

One of the things that I was quite obsessed about, particularly now I’m living back in Yorkshire, is that idea of everything being part of the landscape, of nature, and of everything belonging in some way to each other,” Lee says. “The earth, the animals, the moon and the stars, everything kind of becomes that feeling of oneness my grandma used to talk about. And that was what I was trying to explore a little bit with the boys. I wanted them to feel so rooted here.

Their actions are a mirror not only of the landscape, but also their growing union. Gheorghe caring for an abandoned lamb echoes the crumbing of Johnny’s initial resistance.  I was trying to represent these people as very practical, but also as a filmmaker to be very visual and to constantly layer it with meaning or significance. Even if no one else knew, I knew.

Filming more or less in chronological order, O’Connor stayed up at the farm while Secareanu was lodging in a hotel down in the local village. I knew that if the first time really they met was onscreen, there would be that extra frisson, that extra anticipation or excitement or nervousness about how they were going to work together, and that did translate,.

I wanted to build an almost paternal bond of trust with each of them that has continued long after filming wrapped, and that relationship became a triangle when finally filming together.