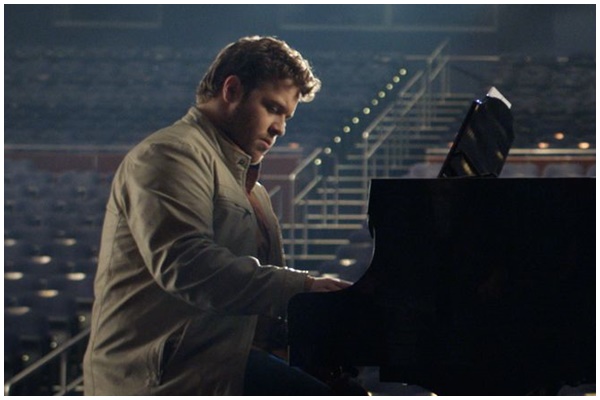 The movie is a powerful reminder that no one is ever too far from God’s love.

The inspiring, incredible, and unknown true story behind MercyMe’s beloved song I Can Only Imagine, the most popular contemporary Christian song in history, is brought to life on the Big Screen by the Erwin Brothers,  a directing team that focuses on creating faith-based and inspirational feature films.

Read more about the Erwin Brothers’ I Sill Believe

Director/co-writer Jon Erwin has never had a film easier to pitch.

The song is MercyMe’s I Can Only Imagine, the most popular contemporary Christian song in history. The story is about how MercyMe front-man Bart Millard was inspired to write the song after overcoming an abusive childhood, holding to his faith, and seeing God’s miracle of redemption.

“In every single one of our movies the DNA is that redemption thread,” says Andy Erwin, Jon’s brother and co-director of I Can Only Imagine.

After seeing Star Wars more than 40 times as a kid, movie lover and co-writer of I Can Only Imagine Brent McCorkle and his brother stopped counting. A musician and film writer, Brent delivers compelling, heartfelt, and emotionally visceral storytelling and soaring scores. One award-winning project caught the eye of Steven Spielberg and landed Brent a first-look deal with DreamWorks. Brent wrote, directed and scored the 2012 film Unconditional, and composed and co-edited the Erwin Brothers’ 2014 film, Woodlawn. He has also directed, scored, and edited multiple high-profile commercial and corporate projects for brands like Frito Lay, Verizon, and HEB. Brent’s production company, Matchstick Media, is based in Nashville.

Both Erwin brothers, along with the film’s cast and crew, gathered in Oklahoma City for a 26-day location shoot aimed at a spring 2018 release. It was the Erwins’ third collaboration with producing partner Kevin Downes. “What I’m most excited about is people seeing this who have never heard the story.” Downes said. “This is a powerful story that I believe is going to bring hope to people all over the world.”

Interestingly, the Erwins’ opportunity to tell Bart’s story actually came about because of one of their other films.

Jon and Andy’s career behind the camera began by shooting sports for ESPN out of their hometown of Birmingham, Alabama. They then transitioned into shooting Christian music videos featuring top names in the industry such as Michael W. Smith, Amy Grant,Third Day and Casting Crowns, eventually winning music video of the year three years consecutively at the GMA Dove Awards.

Finally, the brothers moved into the world of feature films, having now released three full-length features: October Baby, Mom’s Night Out, and Woodlawn. It was at a screening of Woodlawn where the Erwin brothers met MercyMe’s Bart Millard, and where the idea for I Can Only Imagine was born.

“On a whim, we invited Bart to a screening of one of our films,” recalls Andy. “Just kind of reached out to him and said, ‘Hey, we travel in the same circles, but we’ve never really hung out.’”

Bart saw the show and gave the brothers some surprising news.

“He said, ‘I don’t know if you know this, but the studio’s been developing my life story for several years now as a movie. I’d like you guys to consider directing it,’” says Andy. “I laughed and said, ‘Well, the funny thing is they sent us the script this morning.’”

A few years later, they found themselves in Oklahoma City making a movie about Bart Millard’s amazing story.

The duo began their career when they were teenagers, working as camera operators for ESPN in their hometown of Birmingham, AL. They soon embarked on full time careers as sports cameramen covering University of Alabama games all over the country. The brothers had the opportunity to work with ESPN College Football Primetime, FOX NFL, and the NBA covering events like the XGames and the Superbowl.

In 2002, the Erwin Brothers started their own production company. They ventured into creating commercials, documentaries and music videos. They found their greatest success in the world of music. Soon they were directing music videos and producing concerts and television programs for platinum artists like Amy Grant, Michael W. Smith, Casting Crowns, Switchfoot, Skillet, and others. The brothers received eleven nominations and were honored with wins for Music Video of the Year at the GMA Dove Awards for three consecutive years.

The Song That Started It All

In 2001, the song I Can Only Imagine debuted on MercyMe’s first album for a major label and quickly became an unprecedented hit—crossing over to success in pop, country and adult contemporary. The only contemporary Christian song ever certified as double platinum, it also earned Dove Awards for Song of the Year and Songwriter of the Year.

Millard had written the lyrics and composed the music with band mates in just a few minutes. But that inspired burst of creativity packed a lifetime of experience, much of it painful.

The Story That Inspired The Song

As a kid in Greenville, Texas, Bart suffered physical and emotional abuse at the hands of his father, Arthur. His mother abandoned the family and Bart was left alone with his father.

An exceptional athlete in his own youth, Arthur excelled at college football and dreamed of playing in the pros.

“But when he had kids, he dropped out of college to support the family,” explains Andy. “He had a traumatic accident on the job, on a construction site, that left him with a brain injury and in a coma for a week. When he woke up he’d lost his ability to regulate his anger.”

Toward young Bart, that anger manifested as abuse. In Bart’s high school years, two things happened that changed everything. First, his father was stricken with terminal cancer, and second, over time, his father came to know Jesus Christ.

“Bart had to take care of his father every night from midnight until 2 a.m.,” says Andy. “As we interviewed him for this project, we said, ‘If we were to hold a gun to your head and ask, is there a God, what would you say?’ and he said, ‘Absolutely, there is.’ When we asked why, he said, ‘Because of the change I saw in my father. He went from being a monster to being my best friend, the man I wanted to be.’ And so during the two years that Bart took care of his dad, their relationship was completely redeemed.”

“I think when my dad died, he definitely still had some regrets,” reflects Millard. “Until he couldn’t talk to me anymore, he always said he was so sorry for the things he did, and that people would forget about him the second he was gone. And luckily, it didn’t really matter what he thought, because Christ knew.”

Millard didn’t share the extent of the abuse, and therefore the degree of redemption he’d witnessed, until years later. His wife Shannon, who met Millard in junior high school, didn’t know the full story until the couple entered counseling well into their marriage.

The phrase “I Can Only Imagine” first occurred to Millard when leaving his father’s gravesite, as he wondered what his dad might be seeing in heaven. “For me, the thought was very therapeutic because it was just too overwhelming to think of him being gone. And so I started thinking more about what he was seeing, more than him just not being in my life.” This phrase consumed his thoughts, and he began doodling it everywhere—on all of the pages in his journal, notepads, and even on an old couch.

Years later, Millard wrote I Can Only Imagine after the band needed a final song to complete their first album. As he considered his earthly father in heaven, and pondered the great redemption he had witnessed in his life, the song flowed out of him quickly.

“We were making an independent record, and we needed one more song. And I was literally just trying to find a blank page [in my journal], and every page had ‘I Can Only Imagine’ written on it,” shares Bart. “So it was kinda like, ‘I get it.’ I wrote the song on the bus one night. Even though it took about five or ten minutes to write, it had been in my heart for a really long time.”

To fill the pivotal role of Bart Millard, producers headed to Broadway where they found John Michael Finley, the understudy for “Jean Valjean” in Les Miserables. Finley routinely filled in for the main star.

Finley’s booming voice first drew the filmmakers and he had the right look so they cast him in what would be his first film role. Interestingly, his background proved to connect him even more to the role.

“I was born in Arkansas and grew up in southern Missouri, so I had that Midwest mentality,” says Finley. “Bart and I both had early life events that made us grow up real fast. And I connect with the way Bart uses humor to deflect other people.”

As a pastor’s kid growing up, Finley had even seen MercyMe in concert three times.

“The movie is a powerful reminder that no one is ever too far from God’s love,” says Millard, “and that heaven is promised to those who find hope in Christ.”

Since their debut in 2001, GRAMMY® nominated, multiple American Music Award and Dove Award winners MercyMe have sold more than 9 million units in CD, single and DVD sales, garnered more than 28 No. 1 multi-format Christian radio singles and four consecutive mainstream radio hits with “I Can Only Imagine,” (No. 4 AC/Top 25 on Top 40/Hot AC), “Here With Me” (No. 4 AC), “Homesick” (Top 10 AC) and “So Long Self.”

Their radio success has continued with their most recent No. 1 single “Even If” alongside recent singles like “Flawless” (No. 1 for 15 weeks) and “Greater” (No. 1 for 16 weeks), landing them the Top Christian Airplay Artist spot on Billboard’s 2015 Year End charts.

MercyMe made history in 2014 as “I Can Only Imagine” surpassed 2 million digital downloads, making it the first song in Christian music to go platinum and double-platinum in the digital domain.

In 2009, Billboard named MercyMe’s “Word Of God Speak” the No. 1 Song of The Decade and the group the No. 1 Artist of the Decade in both the Christian Songs and Christian AC Songs categories, recognizing them as one of the industry’s most notable talents.

They have sold out venues throughout the US and Canada, including Radio City Music Hall, and have appeared on the Macy’s Thanksgiving Day Parade, The Today Show, CBS This Morning, The Tonight Show with Jay Leno, FOX New Channel’s FOX & Friends, CNN, ABC News and in the pages of Entertainment Weekly, The New York Times, USA Today and more.