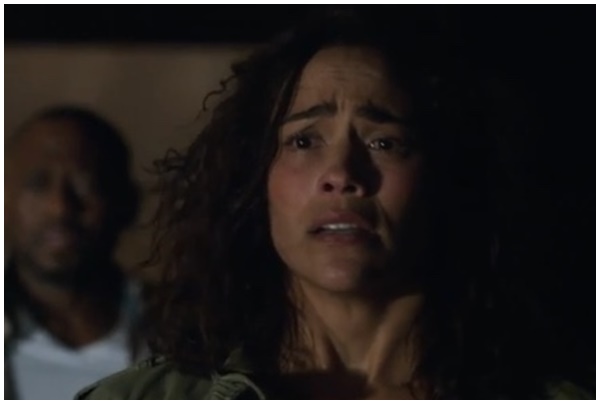 “We take you on a ride, but we also educate you, and I think that’s what I want you to get from the movie. It should stay with you.”

When writer-director Deon Taylor conceived Traffik, he was confronting his own lack of knowledge about a threat that he had assumed happened elsewhere, but realized could happen anywhere: girls and women lured from the safety of their homes, from anywhere they feel comfortable, into forced sex slavery.

In the action-packed thriller Traffik, plans for a romantic weekend getaway at a secluded mountain estate turn to terror when Brea (Paula Patton), a hard-charging investigative reporter, and her boyfriend John (Omar Epps) accidentally discover the hidden world of a brutal biker gang. Joined unexpectedly by their friends Darren (Laz Alonso) and Malia (Roselyn Sanchez), the foursome is forced into a deadly fight for their lives against a ring of criminals who will stop at nothing to protect their secretive operation

“When I started researching human trafficking, I understood it’s a domestic problem, not just an international problem,” says Taylor. “Then, when I realized that 85 to 90 percent of the people who are trafficked in the US are inner city kids, my eyes were opened, and I started to think about how to write a story about this.”

What Taylor didn’t want to do was take the preachy, documentary-style route of so many earnest movies about the subject. He was much more inspired by the ingenious route a genre movie like “Taken” used, which communicated the horror of trafficking through a nail-biting thriller.

“I wanted to write an incredible story around true events, so as the film progresses, you find out how these things happen. The energy took over, and then I was off to the races.”

The first person who sees Taylor’s work is frequent collaborator and producer Roxanne Avent, who calls Taylor “a constant machine of ideas.”

She says Taylor was especially excited about Traffik.

“He wanted to do an urban thriller that would have a huge impact on the audience,” says Avent.

What eventually cracked the storytelling code for Taylor was centering the story on a fearless investigative journalist, like the kind, Taylor discovered, who occasionally go undercover to bust trafficking rings. After creating the character of hard-headed reporter Brea, he added a love story element to give her a vulnerability that raised the stakes on the kinds of peril Brea would find herself in when she goes on a seemingly normal weekend getaway with her boyfriend, a salt-of-the-earth mechanic named John.

The idea, says Taylor, was to present a powerful working woman in an off-job situation that reveals her intimate side, but who when confronted with a potentially explosive and dangerous story that endangers her own life, is in a tense struggle to combine all her smarts, energy, and will to do what’s necessary to survive.

“She had to be a woman who stood on her own merit, on her own strength, but when something happens to you in life – an accident, witnessing a crime, or being robbed yourself – everything you think you would do, you can’t do. It’s heightened. All bets are off. It’s a different world, and that’s what I wanted to build with Brea. I wanted her to be real. She’s not afraid, she looks things square in the eye, but she can also be completely baffled, and vulnerable.”

Ultimately, Taylor conceived of Traffik as a white-knuckle audience-pleaser that connects because it feels real. He says, “I wanted to distinctively take you on a ride, have you fall in love with the characters, love their energy, love what they’re about, then deliver a moment that jarred you, a moment where everything changes. When something life-altering happens, the colors feel different, the electricity feels different. You’re almost making two different movies.”

The most important casting decision Taylor had in assembling the actors for Traffik was finding Brea, who anchors the tale with her intelligence, her intimacy, and ultimately her will to survive in order to report a devastating story. At the top of Taylor’s list was Paula Patton.

Patton described her many talks with Taylor about the script as an “artistic meeting of the minds,” and was excited enough about the project to come on as a producer, too. In conveying what she responded to, Patton says,

“What’s interesting about the film is on one hand it’s meant to scare you, and you’re not sure what’s going to happen next, and in another way it’s a psychological study in human behavior, how we act in certain moments, and what it uncovers about your true emotions, what haunts you, what you’re most ashamed of, and how you’re going to fight through all that to survive.”

What Patton saw in Brea was a fascinating character at a crossroads. “When you first meet her, she’s in a strange moment in her life. She’s had trouble at work, it’s her birthday, and she’s in a relationship where he can see the future in it, the beauty in it, but Brea is a bit more broken from her past. She doesn’t trust in it as much.” The chance to get away and be alone, though, gives them the opportunity to reunite, which Patton sees as a key element in feeling the intensity of what follows. “Before you get into the suspense of it all, you see a couple coming together, and that’s interesting. They have this lustful new love, an excitement in their relationship. As the weekend goes on, you see these two people come closer as they find themselves in this dire situation.”

For Deon Taylor, capturing the right look for his movies is as integral as anything, and Traffik required a cinematographer whose know-how matched Taylor’s passion for the possibilities of light and image.

He didn’t expect to get his dream pick, though: venerated Italian DP Dante Spinotti.

Taylor, a fan of Spinotti’s work on Heat, Last of the Mohicans, and LA Confidential, tossed his name out during a spitball session with producer Roxanne Avent about possible cinematographers, never thinking it would amount to anything.

When Avent pursued it, though, and came back with contact information, Taylor took it upon himself to write a sincere fan letter, instead of a work offer. “I wrote him just to ask if he’d be willing to let me pick his brain about color and light,” says Taylor. “Two weeks later, I was driving in my car, and my phone pinged, and it said ‘Dante Spinotti.’ He emailed me back! I pulled over, and he had written to me that it was one of the most beautiful letters he’d ever received, and that he wanted to host me at his house for dinner.”

That dinner between the young, up-and-coming filmmaker and the 72-year-old Italian camera legend turned into an hours-long lovefest about cinema. “We spoke the same language about cameras, lights, and lenses,” says Taylor. “We had a blast. I got up to leave, and he said, ‘Wait, Deon, you never told me about your movie!’ So I pitched him the movie, and pretty soon Dante Spinotti moved off a hundred-million-dollar movie to do this movie with me. He really believed in it!”

In the end, Paula Patton wants Traffik to be that entertainment that does more than just acts as an escape for a few hours. “This is certainly meant to make you jump out of your seat a bit,” says Patton. “But also touch your heart, and there’s a bit of lustful love in it as well, which is nice. And then at the end you hope people are moved to think about more than themselves, because there’s a lot in our world that deserves our attention and care.”

Taylor agrees, adding that he wants audiences to recognize that after the adrenaline rush, there’s a real problem to address. “I hope they get a thrill ride,” says Taylor. “But I also hope that when the credits come on at the end, and the stats about human trafficking we show, and they say, ‘I didn’t know that’s what happens.’ We take you on a ride, but we also educate you, and I think that’s what I want you to get from the movie. It should stay with you.”

Deon Taylor is a boundary crashing, envelope pushing, unabashed, creative force in the world of film and televison.

In Hollywood, roles vary and job functions are often blurred and blended – for talent, creatives, filmmakers, storytellers, show runners, producers and high-level executives alike. Few people, if any, in Hollywood exhibit the capacity and multidisciplinary skillset necessary to bridge all functions and roles successfully.

Deon Taylor is one of the few who can – and does.

A prolific writer, filmmaker, director and idea generator, Deon Taylor is a hybrid creative force and savvy producer. His work is innovative, his writing is cutting-edge and his vision is distinctive.

As a creator, Taylor chooses to forge his own path through Hollywood and into theatres and TV screens, to the delight of audiences seeking fresh, original content with a unique voice behind it.

Taylor succeeds because he is always thinking outside the box – juggling creative projects with ease, and incubating ideas that others in the industry won’t dare to explore.

Creativity and storytelling are the heart and soul of Hollywood and the global entertainment industry.

They always have been – and always will be. Taylor embraces this fact and, under this mantra, continues to run his own thriving, independent film and production company, Hidden Empire Film Group (HEFG) formerly known as Deon Taylor Enterprises (DTE), which he launched in 2000.

Taylor has written, co-written and directed dozens of films, TV series and special projects and HEFG produces a diverse array of larger budgeted projects, born of Taylor’s boundless energy as a multihyphenate visionary and pioneer. The next Deon Taylor film to hit theaters will be “Traffik” –

Taylor successfully ventured into comedy in 2016 with his horror spoof Meet the Blacks. The popularity of “Meet the Blacks” led to a recently completed sequel, which Taylor also directed, wrote and produced. Due to hit theaters in late 2018, the sequel, titled “The House Next Door”

For most of his career as a filmmaker and creator, Taylor has focused on genre films and excelled. When producer Vincent Cirrincione asked Taylor to read the script for the film Supremacy (inspired by actual events), his passion for a new type of project was birthed.

The film earned critical and commercial praise – so much so that the library at the Academy of Motion Picture Arts & Sciences requested a copy of the screenplay for their permanent core collection.

Even before achieving critical acclaim with “Supremacy,” Taylor achieved cult status acclaim with his Night Tales franchise. Originating with “Night Tales: The Movie” in 2008, “Night Tales” has amassed a cult following among a young urban audience.

Taylor has a background in marketing, sports and promotions. A Nike All-American basketball player from Gary, Indiana; he earned a biology degree at San Diego State University on a full basketball scholarship where he was named the conference’s “Newcomer of the Year.” Taylor went on to play professionally and still competes weekly in the coveted NBA Entertainment League out of Los Angeles.