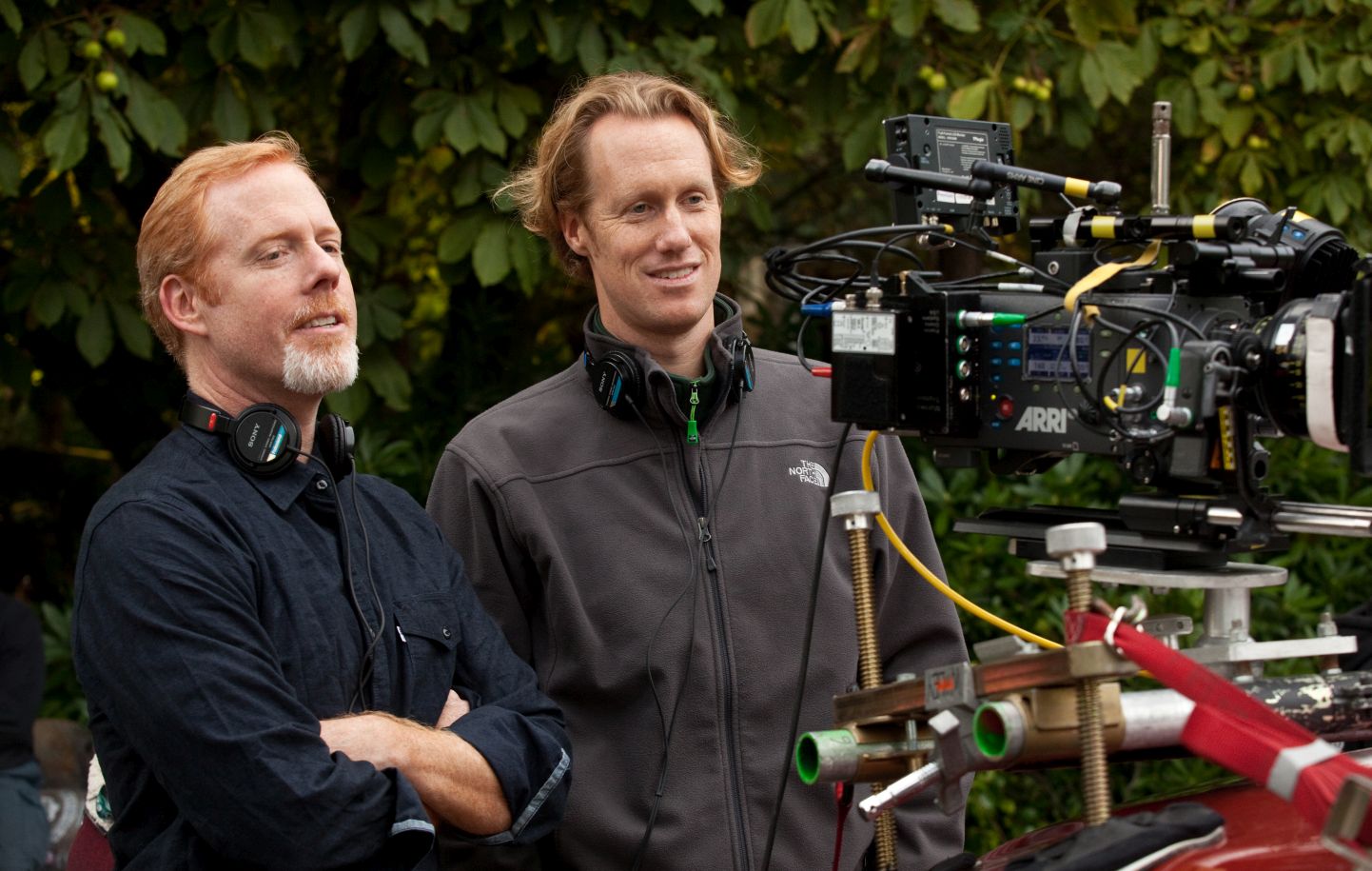 The idea for Jexi was sparked by writer-directors’ Jon Lucas and Scott Moore’s interaction with a popular, and seemingly aggressive, traffic app.

The writers of The Hangover and writer/directors of Bad Moms’ creative spotlight shifted from a group of bad moms to a bad phone when they had a conversation about how the traffic ap Waze.

As Lucas recounts, that real life experience turned into art inspiration – and, ultimately, the fourth directing turn for the duo.

“Scott had this idea, what if we just took the AI thing and made it as obnoxious as it actually feels when you are on the receiving end while.”

And Jexi was born. The traffic scenario made it into the finished film. Lead character Phil (Adam Devine) is put to the task of making a left onto Market Street in San Francisco by an overtly aggressive Jexi.

Not just a comedic look at AI, the filmmakers also saw an opportunity to build a story around the absurdity of just how addicted everyone is today to their phones.

“No one’s talking to each other anymore,” notes Lucas. “It felt like fertile ground for a comedy.”

That said, as they approached the story that would become Jexi, they were adamant the film not carry a preachy “Hey everybody, ditch your phones!” message. The film would instead point to the need to find balance, to look up from your phone and be present in your life, always remembering what’s important.

Meet lead character, Phil… Phil (played by Adam Devine) has been attached to his phone since childhood. Now an adult, he lives alone, he’s single, he doesn’t have any close friends, he doesn’t go out, and he hates his job. His phone is his best friend. When his phone is destroyed in a freak accident, he’s forced to buy a new one which comes with AI Jexi (voiced by Rose Byrne). Jexi challenges him from day one, and in every aspect of his life, but her delivery tends to be a bit “rough,” especially once he starts to put the phone down.

Jexi is hellbent on teaching Phil how to become more human but this artificial device hilariously offers some emotionally-fueled responses in the process, including an especially adverse reaction to his budding relationship with Cate (played by Alexandra Shipp), a bike shop owner he literally bumps into while staring down at his phone.

For Adam Devine, the jealous turn of Jexi had him laughing with every page swipe of the script. “Your phone knows so much about you. You talk to it, it reminds you of things…you have a sort of connection. The phone then gets jealous of Phil’s girlfriend. She becomes a scorned, jealous, ex-girlfriend which I thought was really, really funny.”

Byrne loved the relatability of the story given the state of people’s often unhealthy reliance on their phones, and the challenges of the growing technology’s infringement on privacy. “I thought this was a really humorous way to look at the subject, and that’s always a great way to have people examine things in their life – through humor.”

Todd recalls, “I met these guys when they had written the script for Bad Moms, which I read and immediately fell in love with. I’ve had such a great experience working with them now for the third time because they are really focused on the work. They’re both very smart, incredibly funny, and both really nice guys. This is our third movie, and I hope we get to make 30.”

Similar to Lucas and Moore, Todd was attracted to this particular premise for its relatability.

“We all tap into this movie because we’re all on some level addicted to our phones. We need them, we use them, we can’t put them away. The material the movie takes on in a really fun, comedic way, is just that notion of what is the phone doing for us? And do we really want to be doing it that much of the time?”

Jexi forces Phil to look up from his phone in more ways than one, and her AI expertise is helped in a big way by the wealth of access she has to all of his private information from bank accounts, to cameral roll, to…well, you name it.

The universal fear of possible embarrassment at the hands of your smart phone is real, y’all. And yet, as illustrated in one of the initial scenes of Phil with his new phone, we still dive in to the user agreement without pause.

Moore adds, “It keeps track of your calendar, who you call, your finances, the food you’re ordering. It’s basically running your whole like. To hand that over to somebody who could turn aggressive is so risky, like it could go south.” “And, it does,” Lucas and Moore simultaneously note with a laugh.

Lucas and Moore hope audiences will “just come to the theater and laugh, and maybe come away with a perspective on themselves at the same time. That’s what makes the movie resonate at the end of the day. Come away with a slightly different take on how much they’re on their phones versus doing things in real life.”

Todd agrees: “If the movie makes audiences reassess that, it would be great.” Moore adds, “We made Bad Moms because we were going through the typical parenting struggles and sometimes it just helps to have a laugh about it, and it was relatable. To me, this movie is for everybody who struggles with that love-hate relationship with your phone. You really like it, but wonder if you are using it too much. This is just about laughing at that and relating to that experience.”

Lucas concludes with an emphasis that this is ultimately an R-rated comedy meant to entertain first and foremost: “It’s 5% nutrition, and 95% ridiculously fun comedy. I think that’s the ratio we like to keep.

Lucas and Moore met in 1999 while working for Daniel Petrie, Jr., the Oscar-nominated writer of Beverly Hills Cop and The Big Easy, and have been working together ever since.

Lucas and Moore are best known as the writers of The Hangover, winner of the 2010 Golden Globe for Best Comedy, The Hangover made more than $275 million dollars domestically, making it the highest grossing R-rated comedy of all time. The script earned Lucas and Moore nominations for Best Original Screenplay from both the Writers Guild of America (WGA) and the British Academy of Film and Television Arts (BAFTA).

More recently, Lucas and Moore wrote and directed the sleeper hit Bad Moms, produced for just $19 million, Bad Moms went on to earn more than $180 million worldwide, making it the highest grossing R-rated comedy of the year. The film also won the People’s Choice Award for best comedy of 2016.

In the summer of 2019, Lucas and Moore were commenced to write and produce the third movie, Bad Moms’ Moms.

Lucas and Moore’s other credits include the hit holiday comedy Four Christmases, the romantic comedy Ghosts of Girlfriends Past, The Change-Up, and 21 & Over, which they also directed.

In 2013, Lucas and Moore created and wrote their first television show, Mixology, which aired on ABC in 2014.