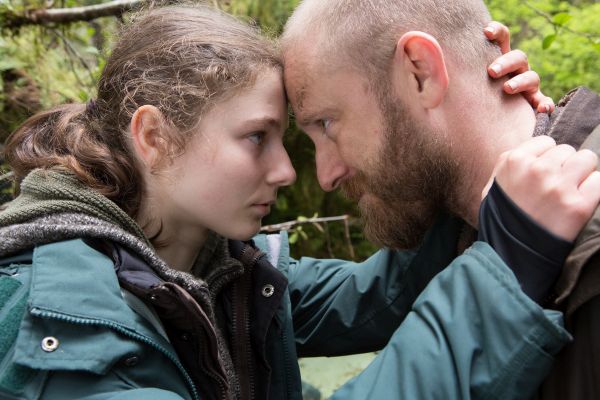 From her Sundance Award-winning first feature Down to the Bone to her Oscar-nominated feature Winter’s Bone and her documentary Stray Dog, writer and director Debra Granik has examined the lives of outsiders struggling to maintain their independence. Granik’s third narrative feature, Leave No Trace, set in the Pacific Northwest’s hidden byways and forgotten encampments, is based on Peter Rock’s novel My Abandonment, which is inspired by a true story.

A teenage girl, Tom (breakout newcomer Thomasin Harcourt McKenzie), and her veteran father Will (Ben Foster of Hell or High Water and The Messenger) have lived undetected for years in Forest Park, a vast woods on the edge of Portland, Oregon. A chance encounter leads to their discovery and removal from the park and into the charge of a social services agency. They try to adapt to their new surroundings, until a sudden decision sets them on a perilous journey into the wilderness seeking complete independence and forcing them to confront their conflicting desire to be part of a community and fierce need to live apart.

The film is directed by Granik; the screenplay is by Granik and Academy Award nominee Anne Rosellini (Winter’s Bone, Down to the Bone), adapted from Peter Rock’s novel My Abandonment.

The real-life story that inspired Leave No Trace

The real-life story that Leave No Trace is inspired by has become something of a legend in Portland, and was reported on in The Oregonian and elsewhere: a girl and her father were discovered to have been living for four years in the nature preserve bordering the city’s downtown area.

They ventured into Portland only to collect his disability checks and shop for what they couldn’t grow. The girl was healthy, well cared-for, and tested academically above her age group. After being relocated to a horse farm where the father was able to find a job, the pair soon disappeared.

Peter Rock, intrigued by the mystery, created a fictionalized version of the tale that filled in the unknowable details. The author notes, “There were other books inspired by the same story, some more investigative. I’m a fiction writer; the genesis of my book was reading the newspaper stories and wondering what happened to the two people — where they came from, who they were, and how they survived.”

They originally optioned the novel in 2007, attracted by the book’s distinctive voice and landscape, eventually bringing in Granik and longtime collaborator, Anne Rosellini.

The four then worked together four years developing the screenplay.

In 2014, Ms. Granik completed her documentary feature Stray Dog, which later aired on PBS and was nominated for an Independent Spirit Award. The film’s subject is Ron “Stray Dog” Hall.

In 2016, Harrison and Reisman approached Bron for financing; Bron then brought in First Look, now called Topic, as a financing partner.

Anne Rosellini is an independent filmmaker whose company, with Debra Granik, is Still Rolling Productions. Ms. Rosellini was nominated for an Academy Award twice in the same year, for producing (with Alix Madigan) and co-writing (with Ms. Granik) the Best Picture Oscar nominee Winter’s Bone.

Formerly a programmer for the Seattle International Film Festival, Ms. Rosellini founded the 1 Reel Film Festival in 1996 before moving into acquisitions for AtomFilms, an online platform for films that was way ahead of its time. She holds a BFA from The School of the Art Institute of Chicago.

The setting for the story is forests and isolated rural enclaves in Oregon and Washington State.

Granik was attracted by this environment: “Films that take place in a specific region always speak to Anne and I, and this is a story inextricably tied to the Pacific Northwest. We could visualize a setting and a journey that would be very photogenic, and a story that would draw us in.”

When we meet the father and daughter, they have been living in a rudimentary encampment, using outdoor living skills to carve out a life almost entirely off the grid and invisible to the outside world.

Granik says, “Will and Tom have life experiences that are very different from anything I’ve known or done. Who can live on public land, and stay undetected for so long? And how did they do it? It became clear that to tell this story would require research and deep consultation with a range of Pacific Northwesterners to understand how to film this existence.”

Rock reports, “The plot of the film differs from my book in some ways, but in terms of the tone it’s pretty close. My book has elements of fantasy, and Debra’s movie grounds the characters in more realism.”

Although the screenplay does not use narration, Granik notes that “the teen narrator from Pete’s book led me to wonder about how a person could live happily and richly with few possessions. Tom and Will have a very disciplined lifestyle, and it necessitates a commitment to distinguish between want and need. Thinking about Tom and Will led me back to Henry David Thoreau’s Walden, and to environmentalist Bill McKibben’s reportage as well as One Man’s Wilderness: An Alaskan

In approaching the story, Granik also thought back to Shakespeare’s The Tempest, with its father-and daughter characters of Prospero and Miranda: “I’m drawn to the ways classic stories depict close relationships in which people complement and complete each other. Will and Tom look out for each other and also pollinate each other’s mind. Tom has learned to be the adult at times, because of her father’s psychiatric vulnerabilities. He, in turn, is trying to teach her every useful thing he knows.”

Leave No Trace tells the story of two people who forge their own path, with no villain in the tale. Granik remarks, “There are a handful of core themes in literature and film that we learn. But right now it seems that stories which rely on direct threats of violent bodily harm, annihilation, and highstakes crimes are what get almost all the attention. I’m curious about our appetite for stories that don’t rely on violent actions but still have strong resonance. Several people, all of them strangers, help Will and Tom along the way, but the tension remains high because of how they choose to live. The antagonistic forces are not exerted by any malevolent character, but by something hard to see — the pressure of social conformity and business as usual.

“In this story the stakes are physical and existential survival. When Tom and her father are evicted from public land and don’t have a safety net, those are high stakes. Where do people who don’t fit neatly into the mainstreams of our culture go, and how do they fare?”

The director adds, “The stakes are also tied to the intricate dynamic between Tom and her father. After they are evicted from the park, where they knew how to structure their lives and relate to one another, they are pushed to learn more about one another when forced into the wider world. Will senses that Tom’s curiosity pulls her in a different direction from him, which eventually leads to a fork in their path.

“That is something universal we all have to navigate, but which we do in our own ways. Since coming of age can require that a person cleave themselves from those they are closest to, it’s always high stakes in terms of how hard that can be.”

In the character of Will, Granik returns to a topic she explored in her documentary feature Stray Dog, developing it here in a fictional context. “I’m very interested in the lives of veterans, especially how their experiences affect them years after the war,” she explains. “And it’s getting to be long after our wars in Afghanistan and Iraq began, the time when civilians begin to forget, and veterans are left holding the bag.

“The father’s veteran identity was something that Pete had embedded in the book. When we got to Portland to research and scout the movie, I was able to go deeper into the issues that the father character wrestles with, through the help of several vets who advised on the film based on their personal experiences.” David J. Morris’ book The Evil Hours, about his experience as a Marine with post-traumatic stress (PTS), and Ron Hall, a Vietnam Era vet who was the subject of Stray Dog, also provided insight and inspiration.

The Cast Ben Foster, who plays Will in Leave No Trace, is known for intense, tightly wound performances in such movies as Hell or High Water, Lone Survivor, and 3:10 to Yuma. “I have appreciated Ben’s work in an array of films, specifically in The Messenger,” says Granik. “This was a big, meaty, soulful role, and I thought he’d have room to put that layered intensity he has into it. He’s a very committed, indepth kind of actor.”

Foster also has an interest in veterans’ experiences. Granik was “touched that he had spent a considerable amount of his working life trying to learn about and understand the experiences of returning soldiers. In several films he’s been asked to delve into that on a very deep level. In discussions with Ben, I also learned that the subject of living off the grid, living with less, and questioning the ubiquity of social media, is very much on his mind. All of that was very helpful.”

The actor reflects, “Although dealing with difficult circumstances, this was a very hopeful script about trying to do the right thing — and I hadn’t been reading a lot of scripts that made me feel very hopeful.

“When the script landed on my desk, my fiancée and I were expecting our first child. So, iterations of fatherhood were very present when I read it. And Debra’s films, particularly Down to the Bone and Stray Dog, had touched me deeply. Because of this combination, I really wanted the job!”

He and Granik “would take walks together and talk about how someone in Will’s position could make this life make sense for himself. Living with his daughter in a temperate rainforest is in many ways working for him, and it’s working for her. When social services comes, what the father and daughter created, and the world that they know, is turned upside down. What will they be gaining, and losing? They each have to grow in different ways, and this pierces the heart.”

Aware of the responsibility of portraying soldiers’ complexities on-screen, Foster notes, “We did not overly articulate what Will is struggling with; his scars are internal. I’ve had the privilege of talking to a lot of brave men and women about this; I have friends who served and survived and have done a lot of healing.

“What’s so inspiring about spending time with those in the service is that they are can-do people; they fix it, they figure it out. It isn’t about ‘Does it feel right’ or ‘Do you want to.’ It’s, you do it. I’ve tried to then understand how I myself could do that.”

For an independent filmmaker, Granik feels that an actor like Foster is a gift: “Ben is a defender of independent films. He puts his spirit into the research, gets immersed, and he stays true to it. He’s not afraid of getting muddy or emotionally entangled. He’s done profound work on films without frills, and he champions it.”