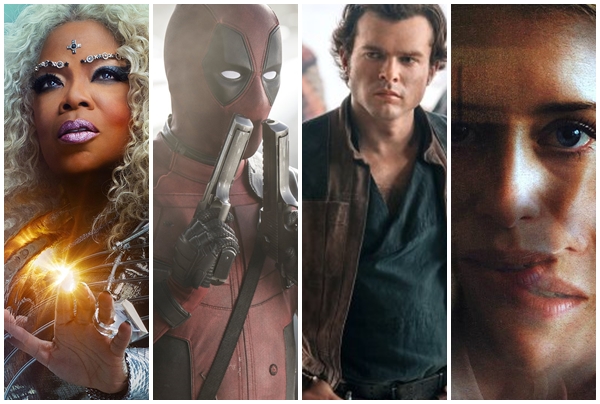 In the science fantasy adventure A Wrinkle In Time, Meg Murry and her little brother, Charles Wallace, have been without their scientist father, Mr. Murry, for five years, ever since he discovered a new planet and used the concept known as a tesseract to travel there. Joined by Meg’s classmate Calvin O’Keefe and guided by the three mysterious astral travelers known as Mrs. Whatsit, Mrs. Who and Mrs. Which, the children brave a dangerous journey to a planet that possesses all of the evil in the universe. A science fantasy adventure directed by Ava DuVernay from a screenplay written by Jennifer Lee, and based on the 1962 novel of the same name by Madeleine L’Engle. It stars Oprah Winfrey, Reese Witherspoon, Mindy Kaling, Gugu Mbatha-Raw, Michael Peña. Trailer / Read more / NY Times Review / Showing from 4 May.

The Hindi-language Indian comedy-drama 102 Not Out tells the story of Dattatraya Vakharia, a 102-year-old man who wants to break the record of oldest living male. There’s just one problem — he must find a way to change the sad and grumpy demeanor of his 75-year-old son. Based on the eponymous Gujarati play written by Saumya Joshi, it is directed by directed by Umesh Shukla and stars Amitabh Bachchan and Rishi Kapoor. Trailer / Read more / Showing from 4 May

My Blind Date With Life (German: Mein Blind Date mit dem Leben) tells the heartwarming true story of Saliya (Kostja Ullmann), a promising student who becomes nearly blind as a teenager. In spite of everyone telling him to be realistic about how this limits his life and aspirations, he persistently holds onto his dream of working in a luxury hotel. Without telling anyone that he cannot see, he unbelievably lands an apprenticeship in the most prestigious hotel in Munich. With sheer determination and impressive resilience, he exceeds all expectations and manages to get through his bluff with the help of his mocking and spry best friend Max (Jacob Matschenz). But when Saliya falls in love with Laura (Anna Maria Mühe), the elaborate deception he so carefully put together begins to fall apart.  It’s an adaption of the real life story of Saliya Kahawatte who lost most of his eyesight at the age of 15, and is directed by Marc Rothemund.  Trailer / Read more / Showing from 4 May

Based on David Levithan’s acclaimed New York Times bestseller, Everyday tells the story of Rhiannon (Angourie Rice), a 16-year old girl who falls in love with a mysterious soul named “A” (Justice Smith)who inhabits a different body every day. Feeling an unmatched connection, Rhiannon and A work each day to find each other, not knowing what or who the next day will bring. The more the two fall in love, the more the realities of loving someone who is a different person every 24 hours takes a toll, leaving Rhiannon and “A” to face the hardest decision either has ever had to make. Directed by Michael Sucsy and adapted by Jesse Andrews. Trailer / Read more / Showing from 4 May

On the eve of retirement a middle class, judgmental snob discovers her husband has been having an affair with her best friend and is forced into exile with her bohemian sister who lives on an impoverished inner-city council estate in the romantic comedy Finding Your Feet. Directed by Richard Loncraine, from an original screenplay by Nick Moorcroft and Meg Leonard, it stars Imelda Staunton, Joanna Lumley, Celia Imrie, Timothy Spall. Trailer / Feature: Finding Your Feet – An inspirational story set around a seniors’ dance class / Showing from 25 May

In Steven Soderbergh’s psychological horror Unsane Sawyer Valentini relocates from Boston to Pennsylvania to escape from the man who’s been stalking her for the last two years. While consulting with a therapist, Valentini unwittingly signs in for a voluntary 24-hour commitment to the Highland Creek Behavioral Center. Her stay at the facility soon gets extended when doctors and nurses begin to question her sanity. Sawyer now believes that one of the staffers is her stalker — and she’ll do whatever it takes to stay alive and fight her way out. Written by Jonathan Bernstein and James Greer,  it stars Claire Foy, Joshua Leonard, Jay Pharoah, Juno Temple, Aimee Mullins, and Amy Irving. Watch Trailer / Read More / Showing from 4 May.

In I Feel Pretty an ordinary woman who struggles with feelings of insecurity and inadequacy on a daily basis wakes from a fall believing she is suddenly the most beautiful and capable woman on the planet. With this newfound confidence, she is empowered to live her life fearlessly and flawlessly, but what will happen when she realizes her appearance never changed? Directed and written by Abby Kohn and Marc Silverstein, its stars Amy Schumer, Michelle Williams, Emily Ratajkowski, Rory Scovel, Aidy Bryant, Busy Philipps, Tom Hopper, Naomi Campbell, and Lauren Hutton. Trailer / Read more / Showing from 4 May

Tully is both bitingly funny and observant-and a quietly radical statement on motherhood, sure to make mothers everywhere feel less alone. Marlo, a mother of three, is gifted a night nanny by her brother. Hesitant to the extravagance at first, Marlo comes to form a unique bond with the thoughtful, surprising, and sometimes challenging young nanny named Tully.  Directed by Jason Reitman and written by Diablo Cody, it stars Charlize Theron, Mackenzie Davis, Mark Duplass and Ron Livingston. Watch Trailer / Read more / Showing from 11 May.

Deadpool 2 unleashes more outrageous comedy. After surviving a near fatal knee boarding accident , a disfigured guidance counselor (Wade Wilson) struggles to fulfill his dream of becoming Poughkeepsie’s most celebrated French Bulldog breeder while also learning to cope with an open relationship. Searching to regain his passion for life, as well as a new stuffed unicorn, Wade must battle ninjas, tight assed metal men, and babysit a group stereotypical side characters as he journeys around the world to discover the importance of family, friendship, and creative outlets for his very open-minded sex life. He manages to find a new lust for being a do-gooder, a sparkly Hello Kitty backpack, all while earning the coveted coffee mug title of World’s Best 4th Wall Breaking Superhero. Trailer / Read more / Showing from 18 May.

Dumped by her husband, longtime housewife Deanna turns regret into reset by going back to college in Life Of The Party.  Winding up at the same school as her daughter, Deanna plunges headlong into the campus experience — embracing the fun, the freedom and the frat boys.directed by Ben Falcone and written by Falcone and Melissa McCarthy. The film stars Melinda McCarthy, Molly Gordon, Gillian Jacobs, Maya Rudolph, Julie Bowen, Matt Walsh, Debby Ryan, Stephen Root and Jacki Weaver. Read more / Trailer / Showing from 18 May.

Maya The Bee: The Honey Games explores another heart-warming story of Maya and her best friend Willi, along with some new and old Poppy Meadow friends. When an overenthusiastic Maya accidentally embarrasses the Empress of Buzztropolis, she is forced to unite with a team of misfit bugs and compete in the Honey Games.  For a chance to save her hive, Maya will venture beyond the hive and meet new friends and opponents who will offer a great challenge.  Fortunately, her best friend Willi, the loveable but clumsy ants Arnie and Barney and her trustworthy advisor, Flip the grasshopper, will be by her side. Directed by Noel Cleary, Sergio Delfino & Alexis Stanermann. Trailer / Read more/ Showing from 4 May

After a string of garden gnome disappearances in London, Gnomeo & Juliet look to legendary detective Sherlock Gnomes to solve the case of their missing friends and family in the computer-animated fantasy romantic comedy mystery Sherlock Gnomes. Directed by John Stevenson, it’s a sequel to 2011’s Gnomeo & Juliet, and features the voices of James McAvoy, Emily Blunt, Chiwetel Ejiofor, Mary J. Blige, and Johnny Depp.Trailer / Read more / Showing from 11 May.

The fictional political thriller Beirut is set in 1980s Beirut and tells of Mason Skiles (Jon Hamm), a former U.S. diplomat who is called back into service to save a colleague from the group that is possibly responsible for his own family’s death. Meanwhile, a CIA field agent (Rosamund Pike)  who is working under cover at the American embassy is tasked with keeping Mason alive and ensuring that the mission is a success. A fictional political thriller  directed by Brad Anderson Trailer  / Read more / Showing from 11 May

I Can Only Imagine is based on the story behind the song “I Can Only Imagine,” the most-played contemporary Christian song of all time, and stars J. Michael Finley as Bart Millard, the MercyMe lead singer who wrote the song. Growing up in Texas, Bart Millard suffers physical and emotional abuse at the hands of his father. His childhood and relationship with his dad inspired him to write the hit song “I Can Only Imagine” as singer of the Christian band Mercy Me. Jon and Andy Erwin are a directing team that focuses on creating faith-based and inspirational feature films. Trailer / Visit the website / Showing from 11 May.

In Traffik a couple, (Paula Patton) and John (Omar Epps) are off for a romantic weekend in the mountains. Isolated at a remote estate, the couple is surprised by the arrival of two friends, Darren (Laz Alonso) and Malia (Roselyn Sanchez). Just when the weekend starts to get back on track, a violent biker gang turns up and begins to torment them. The foursome are forced to fight for their lives against the gang who will stop at nothing to protect their secrets. The film is written and directed by Deon Taylor. Trailer / Read more / Showing

Journey’s End is set in March, 1918, where C-company arrives to take its turn in the front-line trenches of norther France, led by the war-weary Captain Stanhope (Claflin). With a German offensive imminently approaching, the officers (Bettany, Graham, Sturridge) and their cook (Jones) use food and the memories of their lives before the war to distract themselves, while Stanhope soaks his fear in whisky, unable to deal with the dread of the inevitable. A young officer, Raleigh (Butterfield), arrives fresh out of training and abuzz with the excitement of his first real posting – not least because he is to serve under Stanhope, his former school house monitor and the object of his sister’s affections. Each man is trapped, the days ticking by, the tension rising and the attack drawing ever closer… This adaptation of the play Journey’s End  by R. C. Sherriff as crafted by Simon Reade and directed by Saul Dibb. It marks the fifth film adaptation of the play, following Journey’s End (1930), The Other Side (1931), Aces High (1976) and a 1988 BBC TV film. Read more / Trailer / Showing from 18 May

In Please Stand By a young autistic woman runs away from her caregiver in an attempt to submit her manuscript to a “Star Trek” writing competition. Wendy sees things differently: she’s fiercely independent, with a brilliant mind and a mischievous sense of hilarity. Wendy also has autism. To her, people are an indecipherable code and the world’s a confusing place. Inspired by her no-nonsense caregiver, Wendy comes of age and escapes from her care home on the road trip of a lifetime to deliver her 500-page script to a writing competition. Ben Lewin’s Please Stand By presents Wendy’s adventure as a journey of self-realization during which she proves to herself and others that she’s capable of navigating the vagaries of the modern world. The film’s screenplay was crafted by Michael Golamco. Trailer / Read more / Showing from 25 May

Through a series of daring escapades, young Han Solo meets his future co-pilot Chewbacca and encounters the notorious gambler Lando Calrissian in Solo: A Star Wars Story. .  It is the second film in the franchise’s non-trilogy films following 2016’s Rogue One. Like that film, Solo is a prequel to the original trilogy, taking place sometime between A New Hope and the prequels. It stars Alden Ehrenreich, the 28-year-old actor best known for the Coen brothers’ Hail, Caesar!. Lawrence Kasdan (The Empire Strikes Back and Return of the Jedi) who wrote Solo with his son Jon (The First Time).  Directed by Ron Howard. Trailer/ Read More / Showing from 25 May