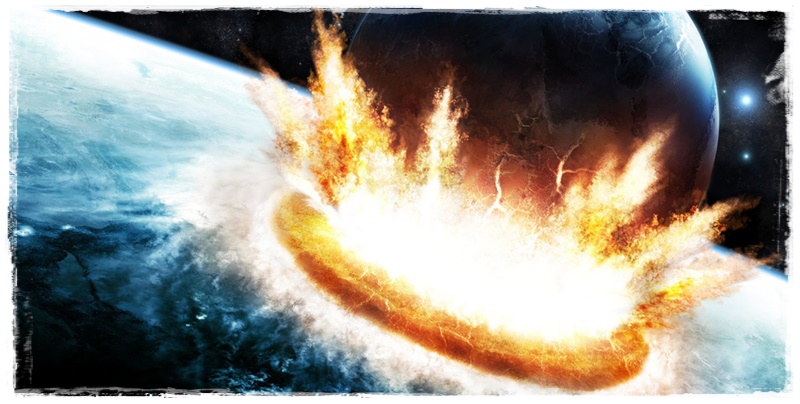 Visionary filmmaker Roland Emmerich is a master of cinema spectacle, encompassing science-fiction blockbusters, like Independence Day, 2012 and The Day After Tomorrow, as well as historical epics, including The Patriot and Midway. In addition to scale and scope, the acclaimed filmmaker’s work always presents a cornucopia of fun, relatable themes, fully realized characters, and powerful emotions about the power of hope. With Moonfall, Emmerich, along with frequent collaborator Harald Kloser and screenwriter Spenser Cohen, crafted a screenplay combining gripping science fiction elements, ever-destructive disaster scenarios, and fascinating and relatable characters where humanity faces the true and absolute dark side of the Moon.

For Moonfall, a theory that described the Moon as something vastly different from what we learned in high school science class inspired Emmerich. “There are some who believe that the Moon is not a natural object,” he remembers. “I thought that was an intriguing idea for a movie. What happens if this object falls down to Earth? Of course, we would have to figure out how to stop it, but I was equally fascinated by the challenge of creating characters who embark on a mission to the Moon to save our planet, as well as the families who stay behind and struggle to survive the cataclysms that come with the Moon’s collision course with Earth.”

In Moonfall unlikely heroes mount an impossible final mission into space, leaving behind, perhaps forever, their loved ones – and discover an incredible secret about Earth’s only “natural” satellite. In the early 1960s, U.S. President John F. Kennedy implored Americans to go to the Moon, not because it was easy, but because it was hard. His hopes and dreams for this impossible task became reality in 1969, with the Apollo 11 lunar mission – a true “giant leap for mankind.” But, posits Moonfall, that world-changing event hid a secret that would, in 2022, see the Moon come to us. Humanity faces the true and absolute dark side of the Moon, as entire cities are evacuated, moving to higher ground offers the only chance of survival, and civil unrest is pervasive and destructive in once unimaginable ways.

“This idea started about nine years ago when I read a book by two British authors called Who Built the Moon?’ says Emerich. ‘They had this idea that the moon was constructed. Why is it exactly 400 times smaller than the Sun so that it perfectly blocks it out? There’s no other moon, to our knowledge, like that. It was a cool idea, and I went with it.”

Kloser, who also serves as a producer and composed the film’s score, notes how Moonfall fits into Emmerich’s body of work. “We want to make people laugh and cry with our movies,” he explains. “It’s really cool for an audience to have that first little laugh early on, so they know it’s okay to have fun, too. That makes the characters’ journeys more exciting. It’s a genre that Roland invented with Independence Day.

“For this film,” Kloser continues, “we came up with the idea of the Moon changing orbit the human spirit won’t give up so quickly. There are always people who exceed their potential, and we like to tell stories about ordinary people in absolutely extraordinary situations.”

Much of Emmerich’s work is also about family relationships, which are very much at the heart of Moonfall. “Family dynamics are rarely easy, and in our movie pretty much every family is broken,” says the director. “But this cosmic event brings them together and leads them to understand that family is the most important thing in their lives.”

Emmerich happily admitted that he sees Moonfall as the first film in a trilogy. He’s mapped out the arc and hopes to film the second and third film back-to-back, but he admits that of course depends on how successful the first one is.

Emmerich said he conceived Moonfall as a three-part space series, complete with a middle instalment that leaves audiences in suspense with an Empire Strikes Back-style cliffhanger. Admitting he’s “not very high on sequels,” Emmerich nevertheless said he “tried this time to make this a trilogy, but I am not sure even if I want it anymore. I think if I do a sequel, I will make it a little bit more like the original Star Wars, the second one will have a huge cliffhanger,” he said. “Because that’s totally lost on people. Everything always has to be clean cut. Why not leave them hanging and say, we left you hanging see the conclusion, in two years.”

Once again, Emmerich pushes the boundaries of the science fiction/disaster genre – this time by exploring his vision of the Moon’s unique megastructure physics. The scripting and filming involved extended discussions between the screenwriters, science advisors, director of photography Robby Baumgartner and visual effects supervisor Peter G. Travers (who has a background in engineering).

The process of writing the script became intertwined with keeping the physics of the falling Moon as believable as possible, which ended up shaping the story itself. “We had the initial talks with scientists about what would happen,” says Emmerich. “We talked to someone who worked at the Jet Propulsion Laboratory in Pasadena. What he told us was quite interesting –that if the Moon goes out of orbit it would transition from a spherical to an elliptical orbit, which gets smaller and smaller until it collides. That was the first thing we were really excited about.”

“Then we learned that it doesn’t matter how close the Moon is to Earth, the gravitational pull will always be the same,” he continues, outlining an inconvenient fact that required a creative solution. “However, the film’s Moon isn’t a natural moon, so it wants to go back into its old orbit; it’s revving up the engine. We played around a bit with how much we accelerated that.”

“There were certain assumptions that we had to make, such as the Moon is a megastructure so it’s not a solid piece of rock,” explains Travers. “It has structure inside that has some density. It’s been orbiting our planet at a certain speed and distance. We had to figure out how it could, for billions of years, be spinning around the Earth, until an event suddenly changes that. The only way you could really get the Moon to fall towards the earth is to suddenly inject it with much more mass than it had before, which in turn informed the development of an anomaly. We determined that if an anomaly could inject mass into the Moon, then that’s how that anomaly decided to take the Moon and crash it into Earth.”

In his native Germany, Roland’s career began when his first film, a student project called The Noah’s Ark Principle, played in competition at the 1984 Berlin Film Festival. He subsequently set up Centropolis Entertainment in 1985 with his sister, producer Ute Emmerich, and under this banner, he has produced and directed over 30 feature films.

He is an international director, producer and screenwriter whose films – including Independence Day, Stargate, Godzilla, The Patriot, The Day After Tomorrow, 2012, White House Down, and Independence Day: Resurgence – have taken in more than $4 billion worldwide. His last feature, Midway, is the epic, real-life saga of the U.S. brothers-in-arms who triumphed over a superior adversary, the Imperial Japanese Navy, at the Battle of Midway, the most stunning and decisive naval victory of the Pacific Theater. The film opened #1 at the U.S. box office and grossed over $140 million worldwide.

Largely recognized as one of Hollywood’s most successful directors, Roland continues to deliver impactful films that challenge both the eye and the mind. While he is known for his blockbuster films, Roland is equally comfortable directing more personal projects such as Anonymous, which explored the explosive theory that Shakespeare’s plays were actually written by Edward De Vere, and Stonewall, a drama about the Stonewall Riots in 1969 New York that sparked the LGBT civil rights movement.

Honouring his life’s work as a producer, Roland was the recipient of the first-ever Carl Laemmle Producing Price in 2017. In 2018, Roland received the Honorary Award for Career Achievement from the Bavarian Film Awards, the most highly regarded accolades for filmmaking in his home country of Germany. In January 2020, the Visual Effects Society (VES) bestowed its Visionary Award to him at its annual gala.

Outside the focus of producing and directing, Roland is a campaigner and contributor for various charities and projects including, but not limited to, the Cambodian Children’s Fund, the Gay and Lesbian Education Network (GLSEN), Global Green, American Red Cross, and the Los Angeles LGBT Center.

Born in Hard, Austria, he began his composing career in the world of pop and rock music, writing and producing for notable artists, including Elton John, Falco, Al Jarreau, Tom Waits, and Jose Feliciano. When Roland Emmerich brought in Kloser to score The Day After Tomorrow (2004), it would be the beginning of a lifelong friendship and creative partnership.

He is currently in development on the upcoming historical epic Those About to Die in partnership with Roland Emmerich, Gianni Nunnari’s Hollywood Gang Productions, and Stuart Ford’s AGC Studios.

Cohen graduated with honours from the University of Southern California with a major in Film and Television Production.

He has worked with many of the industry’s leading film and television studios including Walt Disney, Universal, Warner Brothers, Sony, Netflix, and Amazon.

Most recently, Cohen wrapped production on an original television series, Ballistic (New Regency), which he wrote, created and served as the showrunner alongside his producing partner Anna Halberg.