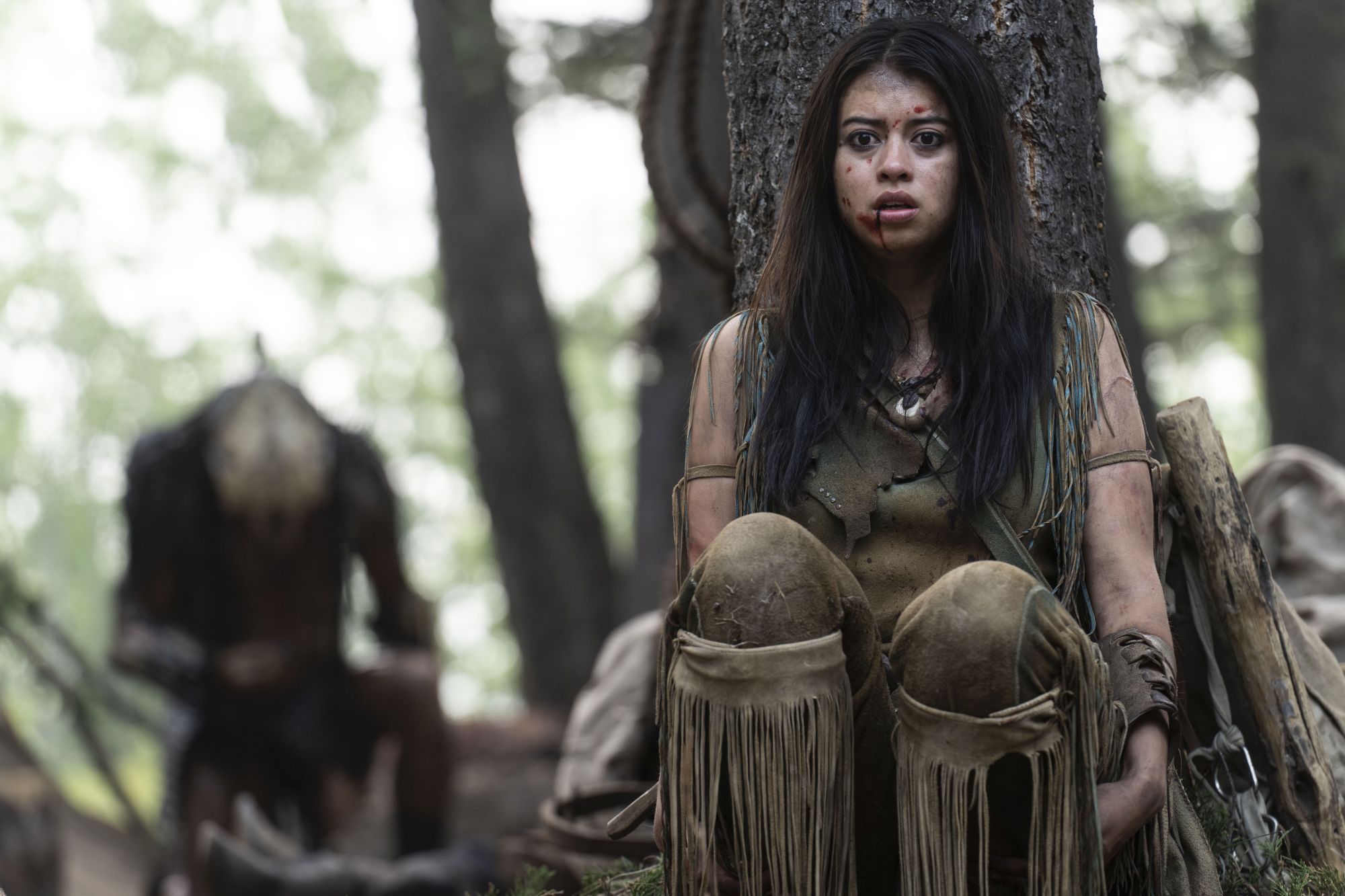 The “Predator” franchise was launched in the late 80s and now resurfaces as the new action-thriller Prey, set in the Comanche Nation 300 years ago.

Director Dan Trachtenberg was a big fan of the original film. “I was in third grade when the first one came out, and I have a very vivid memory of not being allowed to see the movie and being in the car on the way to a karate tournament with all the boys who had all just seen the film and described the entire movie to me on the way to the tournament,” he explains.

“When I saw the very first film, I would have never thought that I, as a full-blooded Native American and enrolled Comanche, and my culture could ever collide with such a franchise in a film,” says producer Jhane Myers.

For over three decades, the Predator has remained an icon for fans and movie-goers alike.

According to Trachtenberg, “There are symbols in pop culture that stand the test of time, and there’s something about the initial design of that guy [Predator] that I think is just cool. It’s not merely meant to scare because it isn’t an animalistic creature…there’s sentience there. The
look of that creature with the helmet and the dreads already was awesome. Then when it takes that off and it’s got this whole other face, that really captured our imaginations. It was gross, but awesome at the same time. ”

Director Dan Trachtenberg adds to the excitement by saying, “I cannot wait for audiences to fall into a time and place and invest in these characters the way that they would in any sports movie. That’s the engine to this movie for me. I’m not an athlete, I don’t play sports, I don’t watch sports, but I love sports films because they are visceral, warm, hopeful, and aspirational. I love the idea that this movie could be aspirational, as well as intense and suspenseful and terrifying.”

In Prey, the alien Predator lands his spacecraft in The Northern Great Plains in 1719, looking to hunt for sport. The land is inhabited by men, women, and children of the Comanche tribe, many of them skilled hunters and warriors themselves. And the “Prey” filmmakers were committed to creating a film that provides an accurate portrayal of the Comanche world at the height of the Comanche Empire, and brings a level of authenticity that rings true to the experience of its Indigenous peoples. As a result, the cast is comprised almost entirely of Native and First Nation’s talent.

Prey is unleashed on Disney+ on 5 August

The Comanche language is incorporated into the film with the characters’ names, which are all Comanche. “One of the most rewarding moments for me was working with Juanita,” director Dan Trachtenberg recalls. “She was near tears after reading the screenplay, not because there hasn’t been a movie that functioned the way it does, which there hasn’t, but because it features Native Americans as the heroes of the movie.”

Amber Midthunder was cast as Naru (nah-doo), a fierce and highly skilled Comanche warrior raised in the shadow of the legendary hunters who roamed the Great Plains. When danger threatens her camp, she sets out to protect her band and faces the supreme test when the prey she stalks and ultimately confronts turns out to be an alien Predator. Smart, confident, and resourceful, she is familiar with every inch of the surrounding landscape and its natural predators.

Naru means “fight” in Comanche, which is more than appropriate for this character. “Naru is a fighter, she is strong,” says Midthunder. “She has strong ideas and opinions about things, about her future, about her life. Her wants are quite different than other people would assign to her or imagine for her.”

Getting cast in the film has been especially memorable for Midthunder, who says, “I’m Sahiya Nakoda, so to film on Nakoda land was a really cool experience for me. To be there, and to be near people who are my tribe or who are from tribes similar to mine, has been an amazing experience. I felt the responsibility of representing the Comanche people in terms of being a warrior…it is a strong warrior society. I had the opportunity to talk to a group of Comanche youth, and they really wanted to be represented on screen as Comanche strong.”

Taabe, a young Comanche warrior, is played by newcomer Dakota Beavers. The young actor is a descendant of Ohkay Owingeh Pueblo. “This film takes place at a time when the Comanche people were in full stride. It was a totally unique take that I thought was really fascinating.”

As the leader of the band of Comanches, War Chief Kehetu, played by Julian Black Antelope, abides by the time-honoured traditions of his people, which do not usually approve of women serving as hunters and warriors. The actor was thrilled to be cast in the production, saying, “One of the most impressive things for me was seeing, not only an Indigenous producer on a film of this level being so hands-on and helping to call the shots, but the attention to detail and cultural life authenticity. She worked with the cast and the director and was there on set every day. She rolled up her sleeves and got right there in the thick of it to make sure everything was done right.”

Aruka (ah-doo-kuh), Naru’s mother, is played by Michelle Thrush. Aruka, along with the rest of the older Comanche generation, wants her daughter to follow a more traditional path.

The Predator, as brought to life by Dane DiLiegro, is a highly advanced alien who is seeking the strongest opponent. The ultimate adversary, and one of the fiercest hunters in the universe, it has high-tech weaponry, cloaking, and heat-seeking abilities.

“One of the things we wanted to do with the creature in this movie was make it look much more creature-like. I adore the design of the original Predator, and think that’s one of the reasons why this franchise still exists, but I really wanted our Predator to feel much more alien and a little scarier,” says Trachtenberg. “There was a very tricky balance in needing to make this movie feel like it is 300 years prior to the original, but also still feeling like it’s very technologically advanced.”

To inhabit the costume, the filmmakers found their Predator in former professional basketball player turned actor Dane DiLiegro. He was an enormous, menacing figure in the costume with his 6’9”, 245 lbs. frame, although out of costume, he wasn’t just the guy wearing the suit. DiLiegro loves filmmaking and storytelling and actively shared ideas of the creature’s back story, intelligence, and even emotions the alien experienced, adding more character and depth to the
Predator.

Actor Amber Midthunder recalls seeing the Predator in costume for the first time on set, saying, “Truly the Predator is hard to look at. The first time I saw him, he was moving in the woods. I actually just walked up to him, and something happened to me. I was captured by the sight, but at the same time was trying to determine if I could kill him for real.”

DAN TRACHTENBERG’s (Director) debut feature, “10 Cloverfield Lane,” was released by Paramount with Bad Robot producing. He directed the pilots for “The Boys,” for Amazon, “Original and Point Grey” and “The Lost Symbol” for NBC/Peacock and Imagine, and also directed “Black Mirror: Playtest” for Netflix.

PATRICK AISON (Screenwriter) is currently writing and executive producing the series “Game” for Snoop Dogg and Martin Lawrence with Jerry Bruckheimer Television producing, and is adapting his short story “Break Even,” as a feature for 20th Century Studios. He has written and produced for the series “Last Light,” “Treadstone,” “Jack Ryan” “Legion,” “Kingdom” and “Wayward Pines.”