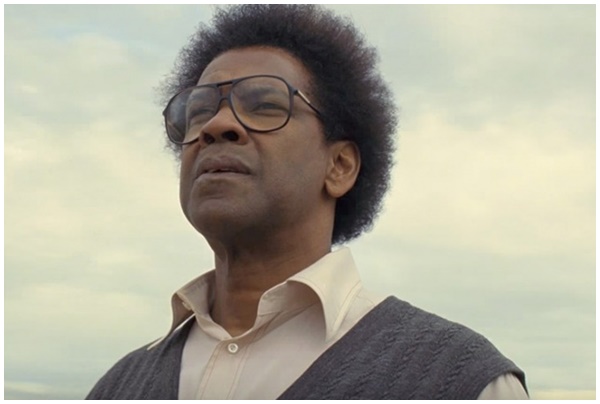 “Audiences are hungry for a story that resonates in real life, that’s relevant.”

In Roman J. Israel, Esq., writer-director Dan Gilroy teams with two-time Academy Award winner Denzel Washington to create the portrait of a layered, complex man whose life has been spent fighting for others’ civil rights – and paid a price for his activism.

Gilroy wrote the film on spec specifically for Washington, feeling he was the only actor who could bring the character to life.  “I wrote this movie for Denzel because of his talent and because Denzel is a  man who believes in human dignity and the human spirit. Knowing who Denzel is in real life, he brings that part of himself to this character.”

Set in the underbelly of the overburdened Los Angeles criminal court system. Denzel Washington stars as a driven, idealistic defense attorney whose life is upended after his mentor, a civil rights icon, dies.  When Roman is recruited to join a firm led by one of the legendary man’s former students – the ambitious lawyer George Pierce (Colin Farrell) – and begins a friendship with a young champion of equal rights (Carmen Ejogo), a turbulent series of events ensue that will put the activism that has defined Roman’s career to the test.

“For Roman the world is a war-zone and he’s never left the front lines.  It’s a blessing and a burden,” he says.  “Activism can take an enormous emotional toll, but on the other side of the balance is the knowledge that you’re becoming the change you want to see in the world – that you’re making the world a better place.  That’s one of the key elements of the film: the importance of believing in something and the burden that often comes with that belief.”

For Gilroy, the dual burden and blessing of belief are exemplified by a quote from civil rights pioneer Bayard Rustin.  “Roman has pictures of his heroes on his wall, and Rustin is represented along with his quote, ‘Let us be enraged about injustice, but let us not be destroyed by it,’” Gilroy notes.  “That’s the question Roman faces in the film – to what extent has he been saved or consumed by his fight against injustice? Anyone who hears a call to do more will see themselves in Roman.”

More than simply hiring an actor for a role, Washington came on as a producer of the film, along with Jennifer Fox and Todd Black.  Washington collaborated with Gilroy for a year before cameras rolled.  During pre-production, Gilroy and Washington would meet in a recreation of Roman’s apartment set, talking about the script, music and other aspects of Roman’s life that would help Washington create the character.  After production, Washington spent two weeks in the edit bay with Gilroy, helping to fine-tune the film.

“Writing the script on spec for Denzel was a huge leap of faith for Dan,” says Fox.  “If Denzel said no, there’d have been no movie.  No one else could play Roman Israel.   Denzel did say yes, Dan’s bet paid off, and Dan and Denzel formed an incredible collaboration.”

“Dan and I talked extensively about the spiritual aspects of his storytelling.  He’s a very spiritual man, and I work at it every day as well,” says Washington.  “Roman is on a spiritual journey, but he doesn’t know it.  Until now, he’s had only two things in his life – the law and his boss – and now his boss is gone.”

With the loss of William Henry Jackson, a leading legal activist, civil rights icon, and Roman’s boss, Roman begins a crisis of conscience that leads to a loss of faith in everything he’s held important until now – and after a tragic mistake, he comes around to finding that faith again.  “There’s a reason that the first and last lines of the movie are the same,” says Fox.  “Roman makes a complete arc in this film – a fall from grace, and a return to faith.”

Well-known as the screenwriter of Hollywood spectacles like Kong: Skull Island and The Bourne Legacy, Gilroy made his directorial debut in 2014 with a very different kind of film – Nightcrawler – which earned him an Academy AwardÒ nomination for Best Original Screenplay.  “I can write spectacle-driven, entertaining films, but what I learned, coming off Nightcrawler is that audiences love to watch something character-based,” says Gilroy. “Audiences are hungry for a story that resonates in real life, that’s relevant.”

That is what inspired Gilroy to create the character Roman J. Israel, whose life mission has been to wield the law on behalf of the disenfranchised.  “The name of the character was one of the building blocks of the story – of a man in conflict with himself,” says Gilroy.  “The Esquire at the end of his name is of great importance to him.  It’s a mark of distinction which, as Roman says, is in the same realm as knight.  As for the J., it’s emblematic of his idiosyncratic nature.”

Gilroy took his screenplay to Jennifer Fox, who also produced Nightcrawler.  “Both Nightcrawler and Roman J. Israel have elements in common – they are opposite sides of the same coin, outsiders who don’t conform, both incapable of navigating the world.  Though the films have some obvious differences – Nightcrawler had a level of cynicism that Roman J. Israel does not – they are both criticisms of a system, led by characters who battle the system every step of the way,” says Fox.  “Roman pays a great price for that battle – his belief that justice and mercy cannot be divorced nearly wrecks him.”

Gilroy heavily researched the legal profession, in particular civil rights and activist attorneys.  He found an overburdened justice system in which the housing of inmates has been privatized and monetized, and one which disproportionately affects African-Americans.  “The criminal courts and prisons are wildly out of balance and greatly in need of reform,” he says.

“When you go to a courthouse or a prison, you see people struggling to prove their worth, to prove their story – not even necessarily their innocence; they just want their story to be heard,” says Todd Black.  He says that many lawyers in the system don’t hear that, because they take a more clinical view of their cases.  “They’re cut and dry – does it fit the law or doesn’t it fit the law? – and they put zero moral value on right or wrong.”

Into this world, enter Roman J. Israel, Esq., a character whose “moral compass always points north,” Black continues.  “Denzel has played a lot of morally corrupt people and a lot of morally right people, but this character is like no one he’s ever played before.”

Roman Israel is a character who continually bucks what he sees as a rigged system.  “Roman’s spent 40 years in a back room, fighting for the dispossessed and under-represented,” Gilroy explains.  “It’s been his all-consuming passion.”

Roman has dedicated his life to public service, but he’s uncomfortable being in public – so uncomfortable, in fact, that he often finds himself unable to stop himself from going too far.  His awkwardness is in his walk, the way he speaks – every ounce of his being.  “He has no filter,” says producer Jennifer Fox.  “No ability to compromise.  He’s going to tell you the truth – the ugly truth – and you may not want to hear it.  He’s so idealistic, so pure, so morally forthright that he has no patience for people who do not see justice his way, and can’t negotiate at all.  He ends up hurting the very people he’s fighting to protect.”

“He is inexperienced in how to convey his knowledge and goes too far – he gets himself in trouble,” says Washington.

That combination of fighting for the disenfranchised and never knowing when to quit – even at great personal risk – has cost Roman much.  He lives a meager life in a tiny apartment on LA’s Skid Row.  For his entire career, he has worked in the back room of a firm headed by William Henry Jackson, a famous civil rights giant who got all the publicity arguing cases Roman meticulously prepared.  But when Jackson suffers a stroke, Roman’s world is upended.

Gilroy says he was inspired to create the role by seeing the spirit of activism of the 1960s and 70s in the current grassroots engagement. “We’re living in a time when people on all sides of the political spectrum are seeing a need to take action and stand up for what they believe in,” says Gilroy. “It reminds me of the 1960s, when there were large-scale demonstrations and protests – an incredible spirit of activism.  I began to wonder: what would it be like if someone committed their entire life to those ideals and stayed with it for decades?  It turns out, there are a small handful of people who never did leave the activism that drove the 1960s – and they seem to gravitate toward law.”

There are aspects to the character that Washington has never portrayed before.  “His social skills are lacking; he doesn’t have the ability to read the signs that the other person is giving him,” says Washington.  “He’s a bit of a savant who’s been protected by his boss while he did all of the groundwork.  He’s been comfortable in his small apartment, his small world, fighting the good fight, and is not really capable of going out there and being in front of people.  I said that Mr. Jackson protected him from other people, but another way of looking at it is that Mr. Jackson protected other people from him.”

That protection has also made Roman something of a relic.  “Roman’s out of step with his time,” says Gilroy.  “Everything about him – his clothes, his music, his apartment, his mannerisms – haven’t really changed since the 70s.”  For example, at one point in the film, he excoriates young men for taking seats while women (played memorably by jazz musician Esperanza Spalding and Jessica Camacho) stand in the back of the room – which doesn’t go well when the women don’t feel a need to be ‘rescued.’  “It’s coming from the right place but shows how the world has moved on without him.”

Washington says that the film isn’t preachy or showy – rather, if the film moves people or changes minds, it’s because that’s what the character does.  “The film isn’t an indictment of the system – I don’t look at it in those terms,” Washington says.  “I look at it as an actor, through the character’s eyes.  He doesn’t come into a courtroom to say the things he says.  He’s not there to change anybody.  But he can’t help but to speak the truth.  This is who he is, and that changes people.”

Black says that Roman Israel’s struggle is a universal one.  “As we become adults, we try to stay true to ourselves and be guided by our consciences to do the right thing, and also try to fit in by doing what one needs to do to succeed in a place of business,” he says.  “That’s a real conflict for Roman.”

With Roman’s life in upheaval, he begins to question everything he thought he believed in.  “Roman’s self-sacrifice and idealism have taken a toll.  He makes a choice with life-altering ramifications,” says Gilroy.  “Coming to grips with that, making peace with it, applying the same principles to himself he applies to others, that’s the essence of the film.”