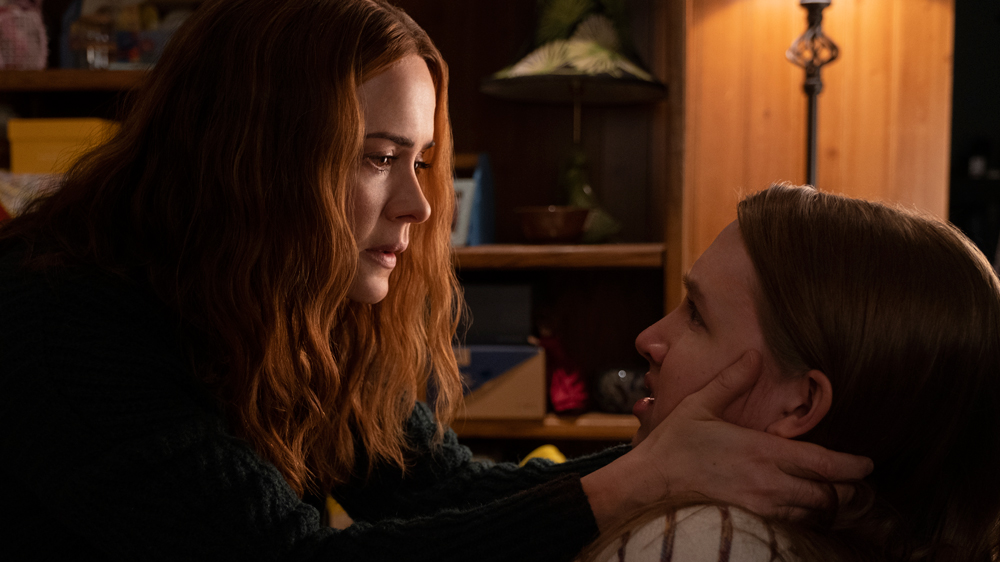 From the visionary writers, producers and director of the breakout film Searching, comes and edge-of-your-seat thriller that shows that when mom gets a little too close, you need to Run.

Up and coming director Aneesh Chaganty and producers Natalie Qasabian and Sev Ohanian, the latter co-writing the film with Chaganty, offer a fresh perspective and unique spin on the style of Alfred Hitchcock’s work, while providing mounting paranoia that culminates in a shocking twist.

At the same time, Chaganty explores the universal and relatable themes of a teenager’s relationship with a parent; and of the ubiquitous chaos that lies underneath the surface of everyday life.

According to director / co-writer Chaganty, the origins of Run can be traced back to his celebrated debut feature Searching, which told the technologically rich story of a father looking for his missing daughter, through a series of computer screens. Having successfully pulled that off, Chaganty wanted his next film to be something completely different.

“Searching had a thousand red herrings and all these elements working at the same time,” the filmmaker elaborates. “For my next project, I wanted to prove that I could handle something more traditional and contained, while still ratcheting up the suspense and excitement that Searching had, and keep the audience emotionally engaged and at the edge of their seats.”

“Ohanian adds: “We even put in a scene where Chloe, who’s desperate to find answers about her situation, turns to the internet, but she has no connection. Which is our way of saying, ‘Not this time…’”

In the psychological thriller Run, a teenage girl’s life begins to unravel when she discovers her mother’s sinister secret.

They say you can never escape a mother’s love, but for Chloe (newcomer Kiera Allen), that’s not a comfort — it’s a threat. There’s something unnatural, even ominous about the relationship between Chloe and her mom, Diane (Sarah Paulson). Diane has raised her daughter in total isolation, controlling every move she’s made since birth. But now, as Chloe prepares to leave for college, she discovers incredible secrets that she’s only beginning to grasp.

A love letter to the Golden Age of Hollywood, “Run is a bare-bones thriller about a mom and daughter who discover certain things about one another. And we just go from there,” says Chaganty.

For the character of Chloe, the stakes couldn’t be higher, nor her challenges more daunting. “Chloe is intelligent, creative, and skilled at building things with her hands,” Qasabian explains. “But one thing she isn’t, is healthy. Chloe was born with all sorts of medical complications, including issues with her lungs and heart, and is paralyzed from the waist down. She needs medical attention 24/7. But lucky for her, at least for the first 17 years, Diane has been the seemingly perfect caregiver, providing medication and physical training for her wheelchair-using daughter, while cleaning for her and being Chloe’s principal cheerleader. They’re a dynamic team, and Chloe can’t wait to leave for college.

“But what starts off as this beautiful bond quickly spirals into something else,” she continues. “After Chloe starts unraveling some dark secrets, she tries to broach the subject with her mom but instead of getting answers, she gets more questions. And every time Chloe tries to get to the truth, Diane seems to be taking her further away from it.”

The film stars Sarah Paulson, who has become an icon of contemporary psychological horror through her work in the landmark series American Horror Story, as the mom with a shocking secret – who will do anything to keep it.

Paulson, no stranger to the thriller genre, says Run is unlike anything  she  has experienced.  “It’s scary, haunting, suspenseful and nail-biting, at its core it’s a story  we can all fundamentally relate to, because it’s a story about the connection to the most important person in one’s life,” she points out. “Of course, most mothers may not go as far as Diane does to protect their child, by keeping her close and safe, but audiences can understand the yearning to do so. Then, there’s beautiful symmetry because as Chloe begins to realize what might be happening to her – it’s simultaneously dawning on the audience.”

Paulson embraced the film’s unique storytelling style. She was also drawn to her character and the mother/daughter dynamic. But what really sold Paulson on being a part of RUN was a viewing of Searching. “It’s thoroughly original and inventive. It was really special, and I thought Aneesh was such an exciting new voice on the scene.”

Regarding the familial connection, Paulson notes that, “It’s about the love a mother has for her daughter. Diane and Chloe live in the Pacific Northwest, where they are completely isolated, creating a bond that is integral to their emotional, spiritual, and physical survival. I was fascinated by the intimacy of that relationship – and by the opportunity to do a film that’s essentially a two-hander.”

“There’s a mystery around Diane and her motivations, and that can be really compelling,” she continues. “Chloe is blossoming – looking forward to life outside the home, going to college. She has that natural desire to spread her wings, and Diane is afraid she’s going to fly too far away. She loves Chloe too much, and has no life outside of the one she’s forged with her. Diane can’t bear the thought of Chloe leaving her.”

Allen describes the film as, “extremely intense. It begins in a gentle place, with a seemingly normal and loving family home. But things quickly go over the edge, and it never stops! There are constant surprises, twists and turns, and discoveries.”

Chaganty’s work with his collaborators on Run is among the highlights of his career, but he cherished one unexpected team member who provided a personal touch that he’ll never forget. As the filmmaker was preparing to begin production in Winnipeg, he was felled by a stomach ailment, and on his doctor’s advice embarked on a very strict diet known as FODMAP. He would have to stick with this diet throughout the three to four months of pre-production and production – a seemingly impossible task, given Chaganty’s demanding schedule and the limits of a caterer and crafts service team serving hundreds of cast and crew.

Luckily, Chaganty had a secret weapon to see him through the ordeal: his mother. “When I told mom about my dietary restrictions, she got on plane to Winnipeg and stayed with us from pre-production to wrap, cooking every meal I ate during that period,” he recalls. “She became like a member of the crew; everybody loved her. My own mom was helping me get better while we were making a movie about a possibly twisted mother who has a perverted view on the relationship with her own sick child. It was a weird twist of fate – but maybe kind of fitting.”

You can’t escape a mother’s love. That simple and inescapable truth is the foundation upon which a talented team of actors and filmmakers have built a powerful psychological thriller that brings together the contemporary and classic – all to keep audiences glued to the edge of their seats.

Says Paulson: “This is a movie that unfolds while being balanced on a razor’s edge and that edge shifts depending on who’s holding the power at a given moment.” “Watching these two characters go toe to toe, whether it’s psychological warfare or physical battles will be an experience,” promises Ohanian.  “We wanted to make sure RUN is nail-biting and engaging but never strays far from the characters.”

“This film is not about a bad guy lurking in the shadows; the antagonist is inside the house,

Qasabian insists. “Is it all in Chloe’s mind … or is it real?”

“Run is a white-knuckle, classic thriller,” Chaganty concludes. “If you want to see how long you can hold your breath, this is the movie for you.”