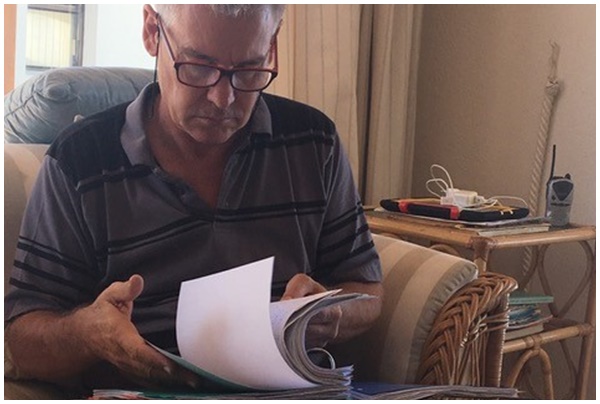 In this haunting story, the tragedy of autism and its devastating effect on a family is exposed.

The powerful South African film Raaiselkind explores the unrelenting burden of autism on an average, loving family and shows the disintegration of the family as a result. It drives home the inescapable truth that society can be cruelly indifferent to whatever it perceives to be aberrant.

In the film, a 9-year-old autistic boy is found dead. His mother, Ingrid (Diaan Lawrenson) who spent her life caring for him and loved him dearly, is being investigated for murder.

The film is based on the Annelie Botes novel, Raaiselkind, where the confrontation, dealing with autism within a family is brought to light. Directed  by André Velts, from a screenplay by by Lizé Vosloo & Pieter Esterhuizen. With Diaan Lawrenson, June van Merch, Deon Lotz,  Anrich Herbst, Ian Roelofs (Alexander).

A note from director André Velts

Raaiselkind is a sensational story that portrays the ruthless cross of autism. In this haunting story, the tragedy of autism and its devastating effect on a family, is being exposed. Searingly honest, it brings the inescapable truth that society can be cruelly indifferent to whatever it perceives to be aberrant.

The primary themes of “Riddle Child” are family, community rejection, friendship bonds and autism.  The film focuses on the intersection of all these themes through the birth of the boy Alex with Autism.  As they discover the reality of autism, so do we.  Through specific themes, we as viewers come to understand more fully the meaning of “family and Friends” and the ever-prevalent society disconnect.

I hope the film will create an emotional experience for viewers, and in some small way educate and help create a language that helps describe what it means to be “autistic”.

Actress Diaan Lawrence collaborated closely with me through an intensive shooting process to build the underlying sense of intimacy and familiarity that characterizes the struggle of a family facing autism.

The film ultimately asks the question: What would you do in this situation? Did she kill her own son? Was it an accident?

There is so much ignorance surrounding subjects such as autism and I believe this story will go some way towards creating awareness of the plight of adults and children afflicted in this way and the difficulties faced by their families.

By sharing stories, we start conversations, create awareness and this is a step towards changing attitudes towards people on the spectrum.

Tell me about Raaiselkind. What is it about?

Raaiselkind is the story of a family whose son was diagnosed with Autism. It’s their journey, not so much a doccie about autism.

How did you get involved in writing the screenplay?

Annelie Botes trusted me enough to adapt her book into a screenplay, with a few provisos and final approval rights. She wanted to make sure that the film reflect the values in her book. It has to be clear that the ignorance and resentment towards the boy were that of the community and never from the mother.

Annelie writes extremely colourful dialogue. I had to make sure that I don’t add words that would not have fit the personality or uniqueness of her character.

Film language had to be cleared with her, for example: In her book, the husband commits suicide, alone on a bridge away from everything and everyone. No one to witness his act of desperation. In the film, he hangs himself in the front garden, from the very swing that has been lovingly built that has brought so much joy to his children. This, whilst his family is at home, is in plain view of everyone. Almost opposite actions, the one in the book and film, but – same result. Annelie approved this change.

How did you connect with the story on a personal level?

Annelie pretty much crossed that bridge for me. One of the many truths that she wrote was that “we tend to share each other’s joys, not our sorrows”. If anything, Raaiselkind made me aware that I too am guilty of that.

Tell me about the process of adapting Annelie Botes’ story?

Adaptation is cut and paste. The skill and I suppose the secret is what to cut and paste so that we stay true to the story.

I read her book from end to end a couple of times, to try and determine the main and subplots and to get a grip on the storyline.

Raaiselkind has two timelines. One reality weekend, (Friday to Sunday) where the 9-year-old child is found dead in the bath, the mother is arrested, and taken in for questioning. And another in past occurrences. From her pregnancy up to and until the boy’s death. Random, Unrelated. The interrogation sequence had to be interwoven with the past occurrences, and this is where I had to decide what stays and what gets left out.

Relationships and events that received pages of dialogue and descriptive detail in the book fell by the wayside in the film. I often told Annelie that we have enough stuff for two or more full feature films, and sometimes reluctantly had to let characters and subplots go.

I then start at the beginning of the book and capture significant dialogue in chronological order. The first draft screenplay was twice the length that we needed. It worked out to 178 pages on the “Final Draft” script format. (It roughly equates to a page a minute) DTI requires that a film be at least 90 minutes long. The cinema likes them between 90 and 100 minutes (They can then fit 5 screenings per day).

Then comes the sad part. If a scene or character does not advance the main story. Delete it. Also, every other scene bears a relation to this. You end up deleting gems. Scenes that you will forever miss for not being part of the film. For example, In the book, the mother “Ingrid” had a full-time career and social life filled with friends and colleagues. Colourful personalities. In the film, they are only mentioned in passing, and not even by name.

I then swopped some scenes around, or break up long scenes and offset them with others. If your scene exceeds a page and a half, the audience will get bored with either the location or the action. You have to intercut with another occurrence. So instead of having two long-ish scenes one after the other. You have 8 or more short ones, interrupting each other.

Finally, and this is the most difficult. I try and replace dialogue with picture/action. I try and apply rule#1 of filmmaking, “Show it, don’t say it.”

The film explores the unrelenting burden of autism on an average, loving family and shows the disintegration of the family as a result. Your views on this?

The family did not break up from the inside. It’s the external factors that cause the chaos. Lack of understanding and support from the school, church, community, medical experts, friends and family. The one and only person that stood by the mother’s side, from the day “Alexander” was born until the bitter end was her domestic, “Miriam”. She said to the investigating officer: “Nie ge-verdra nie, ge-liefd”, when asked about her relationship with the little boy. (“Not tolerated – loved”)

It was difficult from novel to screenplay, because you have to reduce a 270+ page gem into a 90-100 page screenplay.

Tell me about working as a team writing the screenplay. How did your process work?

Annelie and I worked much more as a team than I and Lize. Lize was appointed by Jan du Plessis (M Nett Licensee) to fine-tune the screenplay to make it, in his view, less documentary and more story-like. (Forever grateful that she came on board.)

Did you collaborate with Annelie Botes?

Yes. It’s after all her original work. I had to know what Annelie wanted to keep in and what was important to her. It was imperative that she recognize her story in the screenplay. Adaptations can sometimes be so ego-driven that it ends up being a far cry from the original work.

What do you think makes a great screenplay?

A great story, if it’s an adaptation. An even greater story if it’s an original. It has to touch the audience on an emotional level, therefore know from word one if you are writing for a movie or a film.  Sally Campher (Raaiselkind film producer) nails it: “Where-as a movie fulfils audience expectations, a film has to evoke a change in them”. Raaselkind is a film.

How do you see the future of the South African film industry?

Super bright for some, not so much for others. If you are the flavour of the month (year) you will receive support from investors, distributors and government incentives. If not, you have to be creative and find ways and means to succeed “in spite of”.

What advice do you have for aspirant writers who want to get their screenplays on the big screen?

Never ever stop writing. Writing is one per cent inspiration and 99% perspiration  Natural talent and opportunity mean bugger all if you don’t develop your craft.

Screenplays have to conform to film rules. If you want to break them as Picasso did with his abstract art, make sure you are Picasso.

Never lose focus on who you are writing for. Not the TV editors, script-buyers, crits, or film fest judges. Not even for yourself. Write for your audience, your customer, the person who you hope will take the time, effort and money to go to the movies or subscribe to or stream the end result of your screenplay.

My Rule no #1 of scriptwriting: “Have fun”, after all, you’re just making it up.