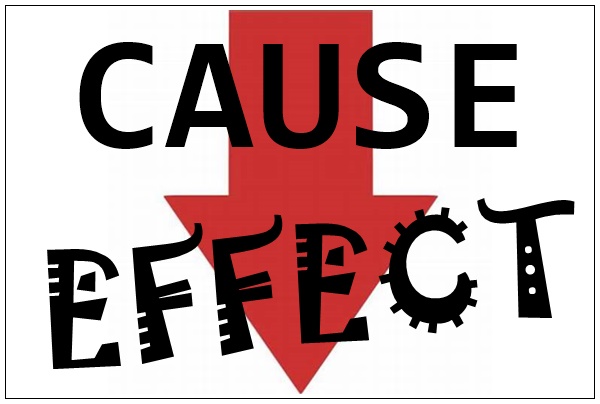 When you are in the process of writing your story, supported by structural signposts, plotting, and outlining, there is only one way to drive your narrative forward with maximum impact, setting the power of cause and effect into motion.

Your story depicts how things happen in a fictional reality, how a cause creates an effect, how the effect becomes a cause that triggers yet another effect.

Classical story design charts the vast interconnectedness of life from the understandable to the incomprehensible, from the secret to the observable,  and gradually reveals a network of chain-linked causalities that is meaningful and rewarding to its readers/audience.

Causality drives the story in which the motivated actions of the characters cause effects that in turn become other effects, thereby interlinking various levels of conflict in a chain reaction of episodes that snowballs to its resolution and ending.

When something happens in your story, when a character reacts to something by choice or coincidence, it forces the character to decide what action to follow.

The what-happens-next effect not only magnifies the dramatic impact for the reader/audience but equally makes the journey much more exciting and thrilling for the characters.

It is in your power as a writer to ensure that whatever happens in the narrative results in surprising and unexpected dramatic or comedic action.

Whereas the Inciting Incident or Catalytic Event is a major structural point in the plotting of the story, causality is in motion with each story event that happens, turning the ordinary into an extraordinary experience.

When a character thinks about something, thoughts expose the internal mindscape of the character, which in turn cause the external, physical reality to alter, constantly drawing its reader/audience deeper and deeper into the life of the character and the world of the narrative, balancing the extreme of the inner and outer fictional realities.

Causality and Classical Design are explored in our signature course The Write Journey.