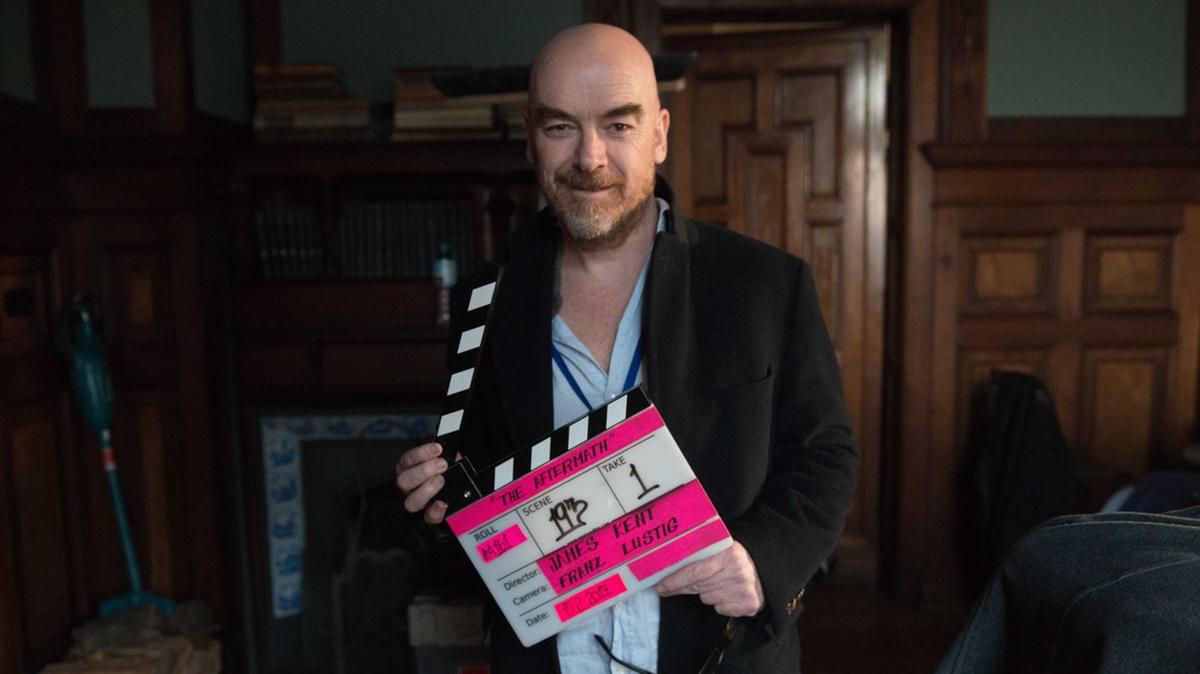 Rhidian Brook, author of the 2013 international best-selling novel The Aftermath, used the seed of his own grandfather’s improbable history to inspire this remarkable story, and helped pen the screenplay.

Colonel Walter Brook was one of the English officers dispatched to Germany to get the country back on its feet after years of death and destruction.

After the end of the World War II, in the late 1940s, control of Germany was divided among the British, the Americans, the Russians, and the French—their combined mission was to help rebuild the war-ravaged nation. The port city of Hamburg, Germany’s second largest city after Berlin, had suffered a devastating five-day bombing raid by the Allied forces in 1943 that killed 100,000 people and caused the destruction of 6,200 acres. Millions of German citizens were either homeless or without food, fuel, or other necessities when the British arrived. After the cessation of hostilities, the native population was barred from having any involvement in running their own affairs.

Governor of a district near Hamburg, Walter Brook, requisitioned a house for his family but chose not to have its German owners evicted. Thus, two families—who months before had been on opposite sides of the deadly conflict—found themselves sharing a home, an arrangement that lasted for five years.

Walter Brook was the inspiration for Colonel Lewis Morgan, the enlightened and altruistic army officer who allows Stephan Lubert, an architect awaiting official permission to work again, to stay on in his mansion on the Elbe.

Walter Brook was the inspiration for Colonel Lewis Morgan, the enlightened and altruistic army officer who allows Stephan Lubert, an architect awaiting official permission to work again, to stay on in his mansion on the Elbe. “Although the events depicted in The Aftermath are of my own making, this story could not have been written without my grandfather’s unique act of kindness,” says Rhidian Brook.

The Aftermath script was crafted by Joe Shrapnel & Anna Waterhouse (Race) and Rhidian Brook, and focuses on Rachael’s strained marriage to Lewis and her growing connection to Lubert.

Set in postwar Germany in 1946, Rachael Morgan (Keira Knightley) arrives in the ruins of Hamburg during the bitter winter, to be reunited with her husband Lewis (Jason Clarke), a British colonel charged with rebuilding the shattered city. But as they set off for their new home, Rachael is stunned to discover that Lewis has made an unexpected decision: They will be sharing the grand house with its previous owners, a German widower Stephan Lubert (Alexander Skarsgård), the architect who designed the grand house,

and his troubled daughter. In this charged atmosphere, enmity and grief give way to passion and betrayal.

Rachael and Stephen’s two wounded souls find themselves in the grips of a reluctant attraction that pulls them ever closer to one another. Finally, enmity and grief give way to passion and betrayal, changing the course of their lives forever.

The sensitivity and nuance with which the love triangle was drawn appealed to director James Kent, a veteran of film, television, and documentaries who won acclaim with his 2014 feature Testament of Youth.

“It’s about a bereaved woman who has lost her child during the war,” Kent says. “It’s a universal story of how you repair yourself and move on in life. It’s got a very redemptive message, which was very important to me.”

In 2010, the novelist and screenwriter pitched the story to Scott Free, the U.S-UK production company founded by brothers Ridley and Tony Scott. “Rhidian started telling me the true story of his family’s time in Hamburg and then the fictional story inspired by that,” says Scott Free executive and The Aftermath producer Jack Arbuthnott.

Arbuthnott brought the project to Ridley Scott and was amazed to learn that the director lived in Hamburg at the exactly the time the story was set.

“Ridley has an extraordinary memory for what the time was like,” Arbuthnott says. “He showed me photos of him and his brother Tony with their dog standing by their bicycles outside their house in Hamburg. It was a striking piece of serendipity.”

“It completely recalled my childhood,” says Scott of the project. “In 1947, I was 10 at the time, my father was important in the army—we lived in Frankfurt, then in Hamburg. My house in Frankfurt, in fact, was the house of a German officer. My mother was very friendly toward his wife who would come once a month to check that we were looking after the house. So, it was very similar, except my mother didn’t have an affair with the German housekeeper.”

As Rhidian Brook began working on the script, he was offered a contract by Penguin Books to tell the story in novel form, a project that became 2013’s The Aftermath. Although Brook remained involved in developing the film and revising the screenplay, Joe Shrapnel and Anna Waterhouse (whose previous credits include the Jesse Owens biopic Race) were also brought on to shape the screenplay.

“They gave the screenplay a new simplicity and coherence,” says Jack Arbuthnott. “They deepened the characters and brought a rigorous, fresh approach that was the perfect complement to Rhidian’s work.”

An avid student of history, director James Kent was struck not just by the complexity of the characters and the emotional arc of the story but also by the singular backdrop that serves as the setting for the film.

“It’s an extraordinary moment—the world’s been absolutely laid flat in a way it never had before,” Kent says.

“The British in particular felt very strongly that we shouldn’t repeat what happened at the end of the First World War, so the idea of punishing Germany was off the agenda. For me, that makes it an astonishingly generous, positive, and far-sighted moment in British history. Of course, the European Union came out of this moment, and it felt to me like this was something that spoke to us very directly now.”

Keira Knightley had become a mother 18 months before filming began, so for her, the film was a sort of fruition of her life experience. It was quite a complex role for her, and it was a joy to see her settle into it.

For Knightley, The Aftermath is an intimate story about a woman who, having suffered a cataclysmic experience, finds a way to rebuild her life and move toward a more hopeful future. But it’s also a film with a larger message about the importance of forgiveness, compassion, and the fundamental need for human connection.

“I hope people are as moved as I was when I read the script,” says Knightley. “The themes within the piece really stuck with me: how do you see the humanity in people that you’ve been raised to believe are evil. How do you bring a nation back from destruction? How do you respond to the aftermath of something so monstrous and horrific? How do you get through to the other side? I think particularly in the present time they’re unbelievably important things to think about.”

Knightley interprets the trajectory of Rachael and Lubert’s relationship as almost inevitable because of the personal tragedy they have in common, and their understandable desperation to deal with their all-consuming grief. “You want to feel something other than the incredible pain that you’re in, so I think sex comes into that quite a lot,” Knightley says. “The relationship with Lubert begins with a sexual need. But also he’s somebody who understands what she’s going through and will confront it, as opposed to her husband, whose way of dealing with his grief is to simply not talk about it, to shut down and not in any way give her the support that she needs. That pushes her into finding solace somewhere else.”

Knightley and Clarke came to The Aftermath having had the benefit of previously working together on 2015’s real-life adventure film Everest. “It’s a very complex journey that Lewis and Rachael go on,” says Clarke.

“As an actor, you need to be with an actor you really are at ease with and have a confidence in because you’ve got to get into the moment pretty quick. Keira’s just great like that. On The Aftermath, I knew immediately that she was going to steer the ship. She’s the axis that we and a lot of the story revolves around.”

The other man in Rachael’s orbit is Stephan Lubert, the dignified German architect who comes between the British couple, played by Swedish actor Alexander Skarsgård, who won an Emmy for his fearsome depiction of an abusive husband in 2017’s Big Little Lies.

Skarsgård says he appreciated the levels of nuance in the script. “I’ve read a lot of Second World War stories, and a lot of them are very black and white,” he explains.

“It’s very much the Germans are all evil, and the Allied soldiers and civilians all good. The author will often throw in a token good guy on the German side to show that they’re not all bad. The Aftermath went much deeper. To see Hamburg in 1945, the devastation—half the city was levelled and feral kids were running around the streets desperately trying to find food—that misery is heartbreaking. It shows the horrors of war on both sides. It’s not clear cut, and it’s not about winners and losers. It felt like a very different insight into the post-Second World War period.”