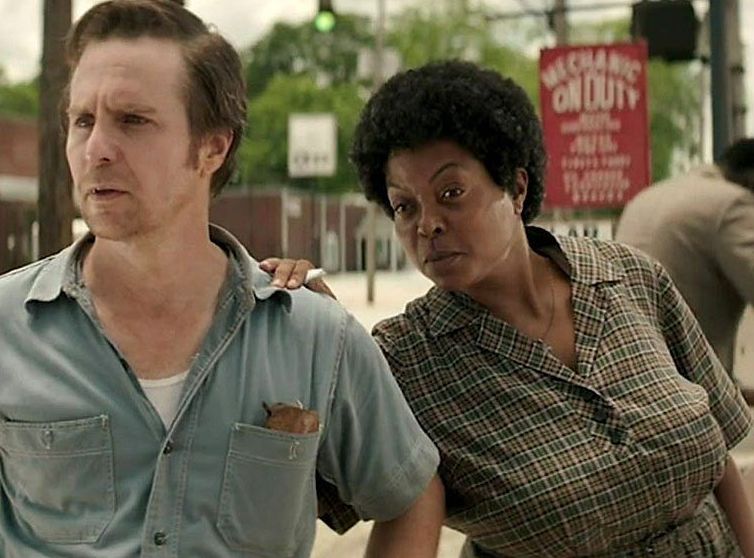 In 1971, Ann Atwater and C.P. Ellis were well-known residents of Durham, North Carolina, but certainly not a pair you’d expect to see together. Ann was a single mother and a grass roots activist fighting brazen slumlords, firetrap schools and do-nothing local officials. Ellis owned a tiny East Durham gas station just like his millhand dad, and his own four kids. C.P. joined the KKK and became their voice as Durham’s Exalted Cyclops of the Ku Klux Klan.

The idea of Ann and C.P. ever exchanging a civil word was close to unthinkable, but in writer-director Robin Bissell’s The Best Of Enemies, a dramatic feature film inspired by true events, these two bitter rivals are forced to start talking to resolve a crisis in their dangerously divided city.

The Best Of Enemies marks the screenwriting and directorial debut of Bissell, a producer of award-winning films including Seabiscuit, Pleasantville and The Hunger Games. His original screenplay was inspired by Osha Gray Davidson’s 1996 non-fiction book The Best of Enemies Race and Redemption in the New South.

Bissell, who grew up in suburban Philadelphia, Pennsylvania, was unaware of the charrette or any of its participants until 2005, when he came across a brief item about C.P. in Time Magazine. The former Exalted Cyclops had died, and Time marked his passing on the “Milestones” page. Those few stark facts were Bissell’s introduction to a tense tale that would dominate his imagination for more than a decade.

“My first thought was ‘how did that happen!,’” Bissell recalled, referring to C.P.’s transformation.

“The item was just three or four lines and left me with so many questions.” Bissell found answers and historical context in Osha Gray Davidson’s book, which primed him for Diane Bloom’s award-winning documentary, An Unlikely Friendship (Filmmakers Library, 2002).

Bloom’s film featured the real-life C.P. in his later years, chastened by the fall-out from his shocking charrette vote, but never regretting it. Bloom had filmed C.P. and Ann together and their bond was obvious. The documentarian also interviewed Riddick and participant Howard Clement, adding more layers to the portrait.

Bissell was now officially hooked on this history-making crew and knew he would tell their story someday in a dramatic feature film.

“Humanizing a member of the Klan wasn’t something I took lightly,” Bissell acknowledged, but the documentary reassured him. “What an odd couple C.P. and Ann had become – they made you laugh and think. They had become very close and when C.P. died, Ann delivered the eulogy at his funeral.”

They did have a lot in common. As Sam Rockwell, who takes on the role of C.P learned, “Ann talked about her kids getting made fun of at school because she was hanging out with a Klansman, and C.P.’s son’s teachers were making fun of him because his dad was a Klansman hanging out with Ann.”

But C.P. was as good as dead to almost everyone he knew – Klan folk, as well as the White Citizens Council and other big shots who had used him over the years – the minute his heart overruled his hate. “The city leaders and superintendent of schools were all sitting in the front row that night,” said Riddick.

He still had Mary, though. Some wives basked in the reflected glow of a husband’s high rank in the Klan. Not Mary. She was busy raising four kids, including one with severe disabilities, and had never cared for the Klan anyway. Besides, she liked Ann.

“Mary was probably the first white woman who ever arrived on Ann’s porch with a jar of jam and got to go inside,” said actress Anne Heche. “Ann and C.P. were mirrors of each other,” observed Taraji P. Henson, who plays Mary. “Once she tapped into his love language – his family – she understood that and pulled him over to her side with sheer force of will.” “It took an army to change C.P.,” Bissell concluded, “but his racism was learned, and he was ripe for change.”

From Inspiration To Writing The Screenplay

The six-month option expired well before Bissell had written a word.

In the meantime, The Best of Enemies had become a play, and Davidson wanted to wait and see if it went to Broadway before granting Bissell another crack at the film rights. Mark St. Germain’s highly charged play premiered in 2011 and has been well-received at regional theaters around the country in the years since.

But with a Broadway production still just a dream, Davidson decided to let Bissell try again. In the summer of 2013, with the mega-success of The Hunger Games behind him, Bissell was ready to step away from his life as a producer and go to Durham.

Coincidentally, The Hunger Games had filmed in North Carolina, but in Asheville and Charlotte, and Bissell knew that Durham was different. His trip coincided with opening night of St. Germain’s play at Durham’s Manbites Dog Theatre. Naturally, Bissell attended – as did Bill Riddick and Ann Atwater.

The two history-makers were friendly to the Hollywood visitor, but far from star struck. “Robin was the third person to approach us about doing a film,” Riddick recollected. “After he left, we figured we’d never hear from him again. But he did come back. We had him to our house for a meal and did some serious talking.”

Bissell, outlining the story by then, already knew he’d have to adjust the timing of a few historical facts to sustain the dramatic momentum a film needs.

He explained his thinking to Atwater, Riddick and C.P.’s daughter, Vickie Lewis, the keeper of Ellis family history. All three gave him their blessings on the changes – and the rights to their stories.

Bissell went home and had a first draft in April 2014.

As time passed, Bissell’s bonds with his subjects deepened. “Vickie would ask, ‘Do you really think you’re going to be able to do this?’ She wanted her father’s story told,” he explained. “I always wanted to call with good news, but in the movie business, you’re so often on the brink of good news. So, I’d have to say, we don’t have it yet, but we will. Their hopes weren’t way up, but they trusted me, and believed in the script.”

Bissell adds, “Ann was so very excited to see the movie and my biggest regret was that I couldn’t pull it together before she passed away.” Producer Matt Berenson believed in Bissell’s script, too, and committed to helping him find the money to get The Best Of Enemies made.

“Robin is a humble guy,” said Berenson. “I don’t think he knew how good it was. The fact that it was a true story blew my mind.” Not only true but riveting. “Robin took heavy subject matter and made it entertaining, not a history lesson,” Berenson emphasized. “He understands that great drama has humor in it, just like life, and he found those moments in the story. It makes you laugh, then pulls the rug out from under you and you’re crying.”

While Bissell was a first-time writer-director, he was also a seasoned producer with a firm grip on dramatic story-telling. “You try to pepper in a little history, but the less the better,” he said. “People want to be invested in the characters. They want to feel.”

Bissell’s very first reader was Danny Strong. The two men had started their careers as co assistants to Gary Ross. While Bissell stayed on to produce with Ross, Strong left to write and act. He won the Emmy Award for Outstanding Writing for a Movie, Miniseries or Dramatic Special with Game Change in 2012, and was working on a new project – the TV series Empire – when Bissell showed him The Best Of Enemies.

“I want this story to light a fire for people who want change,” said Henson.

“Racism and hate are learned. Look at what happens when a cold heart turns warm. This really happened!” producer Fred Bernstein (An Interview with God) noted: “If people like C.P. and Ann can find common ground, maybe there’s hope for all of us,” he said. “Fight for your beliefs, but if you really want to effect change, understand the people you’re fighting with.”