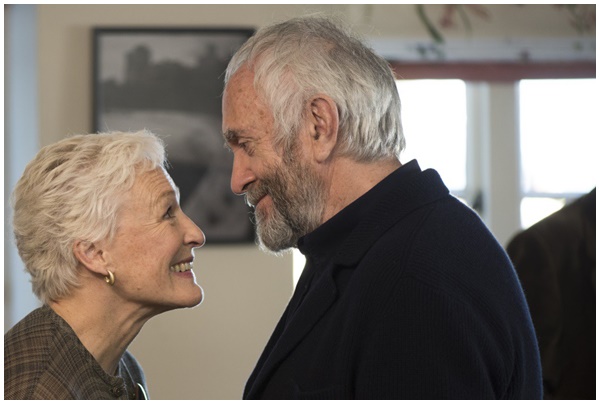 A tender  and  complex  examination  of  late‐life relationships, and a fascinating observation of human nature in its many guises.

The Wife is a poignant, funny and emotional journey; a celebration of womanhood, self‐discovery and liberation from top Swedish filmmaker Björn Runge.

It tells the story of a long‐term marriage built on passion, ambition and a huge compromise which comes crashing down many years later.

Behind any great man, there’s always a greater woman … and you’re about to meet her. It is crucial you get to know this woman – many of us already do and don’t even realise it.

Joan Castleman (Glenn Close): a highly intelligent and still‐striking beauty ‐ the perfect devoted wife. Forty years spent sacrificing her own talent, dreams and ambitions to fan the flames of her charismatic husband Joe (Jonathan Pryce) and his skyrocketing literary career. Ignoring his infidelities and excuses because of his “art” with grace and humour.

Their fateful pact has built a marriage upon uneven compromises. And Joan’s reached her breaking point. On the eve of Joe’s Nobel Prize for Literature, the crown jewel in a spectacular body of work, Joan’s coup de grace is to confront the biggest sacrifice of her life and secret of his career.

Told partly in the present‐ day 1990s and in flashback to the early days of their relationship in the 1950s and 60s, this sweeping, yet personal drama is adapted from the much-loved bestseller by Meg Wolitzer.

For screenwriter Jane Anderson, (How to Make an American Quilt, Olive Kitteridge) the film offered  an opportunity to tell a story of marriage and hunger to succeed from a very unique and lesschartered perspective.

Jane Anderson is an award‐winning screenwriter, playwright and director and has been writing screenplays since 1986.  She has been nominated for five Primetime Emmy Awards, for which she won two for HBO’s mini-series ‘Olive Kitteridge’ (2014) and the TV-movie ‘The Positively True Adventures Of The Alleged Texas Cheerleader-Murdering Mum’ (1993) Most recently she co-wrote the documentary ‘Packed in a trunk: The lost art of Edith Wilkinson’ (2015). Anderson’s other award-winning work include the Showtime film ‘The Baby Dance’ (1998) and the HBO drama Normal (2003) – both adapted from her own plays.

“Way back in 2003, Meg Wolitzer’s incredible novel called The Wife came out, and I read it, and I  was blown away. What Meg does, she tells a story that is so subversive about what it is to be a female writer. It’s the point of view of what it’s like to be the wife of a great literary giant. And secretly she’s the one who has the true talent,” says Anderson.

Still, Anderson felt that the story needed some adjustments to make the transition from page to  screen smoothly. “When you adapt a piece of literature to film, you have to make a couple of  adjustments to make the narrative more dramatic, more exciting, more sparkly. In the novel the  prize that the great Joe Castleman gets is an obscure prize in Helsinki, Finland. I chose to make it  take place where the Nobel Prize is, because that ups the stakes. I also added into the dramatic  narrative the rather damaged adult son of Joe and Joan Castleman.”

For Anderson, the casting of Glenn Close was a huge coup for the production, and added a sense of grace and levity to the characterization of a very interesting woman.

“The character of Joan Castleman is a deeply contained, elegant and shy woman who has taken the back seat to her brilliant husband,” she said. “Who better to play that kind of role and to give it all the texture and all the subtext that you need than someone like Glenn Close, who is just very naturally an elegant, wickedly smart actress?”

“It was probably one of the trickiest roles I’ve ever confronted,” says Close about the part, which required her to convey a complex protagonist’s narrative from the shadows. “I think it’s a situation that every woman can relate to, whether they’re of younger generations or not. I’m very proud of the film because I think it speaks to the subtleties of the male-female relationship, and women who have defined themselves through men to their detriment,” she adds.

Anderson is hopeful that the film will invoke debate about marriage, the secrets you keep and the  compromises you make.

“When I write a film, I always ask myself: ‘What is the audience going to  talk about when the lights come up and they all walk out together?’ ’ And I think what they’re going  to talk about is: What are the compromises that we make in a marriage, in a great partnership? Are  there secrets that we keep as a couple that are legitimate? Are there compromises that you make as a woman in a marriage? As a husband, how do you respect and love your wife?

Director Björn Runge read the novel after I read the script and did 3 rewrites of Anderson’s screenplay.

“I read the book and could come back to some details and bring them back to the screenplay. But for me, the screen-script is very much a dramatical backbone from the book. The book is a, it’s a long race, much more detail. But I think the adaption is very, very good.”

Secrets And Lies: Getting To The Heart Of The Wife’s Complex Characters

In order to let the story of this couple be woven in all its subtlety, complexity and dark humour, the production needed an instinctive, wise filmmaker, and a director known to work particularly well with the actors.  Björn Runge, whose ability to bring unique perspective to his films such as Mouth to Mouth and  Silver Bear‐winner Daybreak, proved to be an inspired choice.

Björn Runge is an acclaimed director, author, screenwriter and playwright, from Lysekil, Sweden. His first feature film was Harry Och Sonja – which he wrote and directed was released in 1996. One of  the highlights of his career was the film Daybreak (Om Jag Vänder Mig Om), which he also wrote and directed, and received two Guldbagge Awards for Best Director and Best Screenplay in 2003. Björn’s acclaimed film Mouth To Mouth (Mun Mot Mun)  also received a Nordic Council Film Prize Nordiska Rådets Filmpris) in 2005.  Other film and screenplay credits include Happy End, short film Rensa Fisk, Raymond ‐ Sju Resor Värre, and documentary Vulkanmannen. Runge is also known for directing TV projects; TV documentary Dokument Rörande Filmregissören Roy Andersson, TV film Ögonblickets Barn, as well as the TV Mini-series Anderssons Älskarinna.    Along  with  screenplay  and  director  credits,  Runge  also  published his  first  novel  ‐  Det  Allra  Enklaste  in  2014.  From  2012  to  2017  he  directed  several  stage  productions and has also published a book that includes five of his plays. He is currently in the process of completing a film essay titled Conversations  Over The Horizon and a new book.

Long acclaimed as ‘an actor’s director’, Björn Runge’s innate ability to allow a story to breathe, and draw the very best out of his cast, along with the script, was what drew many of cinema’s most  acclaimed actors to the project.

For Runge, one of the big draws of the story was the intense relationships between the various  characters within the film.     “There was a play between a mother and a father and a son. It was something I was familiar with in my earlier work in theatre and on shoots in Sweden. But what I was really attracted to was that it was set up on a Nobel Prize winner’s stage. It was a small story within a larger story.     “I think the biggest difference from the novel to the script is that Jane has given the son, David, a  more important position in the script.”

Producer Piers Tempest hopes the film, with such a complex relationship at its core, will connect  with audiences deeply.

“It’s a very real relationship, people will feel very within that relationship,  hopefully it will resonate and people will find strands and character traits that they will relate to  and  just  be  really  submerged  into  a  story.  I  think  that’s  the  best  use  of  cinema  when  you  completely know the character,” he says.

“For me, this film is like music; two instruments that play for us. The way that Glenn Close and  Jonathan Pryce act reminds me of music ‐ like two solo instruments playing together.  Whilst  editing, it was impossible for me to detach the story from their acting. They had the ability to  incorporate the script into their acting, in a way that was deeply fascinating. It’s not just a plotdriven story.

My ambition as a director is to find ways to let the actors be free.  In the end, it’s all about finding the the music of the script, to let it swing. In the best-case scenario, the audience will share that swing during the golden moments of the film.”