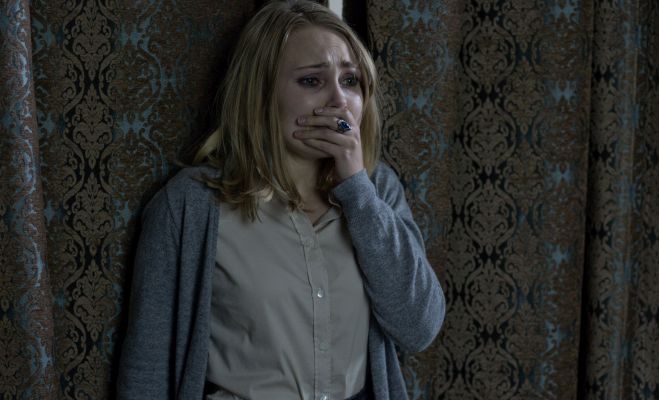 The shadows descend … the floors creak… a winding staircase bends … portraits breathe… and then, down a dark hall is where identity, passion, creativity and terror face off in director Rodrigo Cortés’ film of Lois Duncan’s iconic 1974 suspense novel Down A Dark Hall.

Kit (AnnaSophia Robb), a difficult young girl, is sent to the mysterious Blackwood Boarding School when her heated temper becomes too much for her mother to handle. Once she arrives at Blackwood, Kit encounters eccentric headmistress Madame Duret (Uma Thurman) and meets the school’s only other students, four young women also headed down a troubled path. While exploring the labyrinthine corridors of the school, Kit and her classmates discover that Blackwood Manor hides an age-old secret rooted in the paranormal.
Feeling recognized in ways they never did previously when they were considered “troubled,” the teens begin to assert themselves in new ways. In fact, their abilities do not belong to them at all — the girls have a connection to another realm they could never dream of. Yet as Kit discovers the terrifying truth about the world they’ve walked into, Blackwood boarding school and Madame Duret’s malevolent intentions become a nightmare there may be no escape from.

It’s a story perfect for the movies, as Cortés turns Duncan’s story into a metaphor-rich, gripping supernatural drama, from a screenplay by Mike Goldbach and Chris Sparling, stunningly photographed by cinematographer Jarin Blaschke ( The Witch ).

In order to bring Down A Dark Hall to the screen, it took a filmmaker who saw more in the story than just the jolts and jitters often associated with suspense. Rodrigo Cortés trained as an editor, and by putting together stories for maximum effect, his sensitivity and instincts as a filmmaker became razor-sharp.

Since becoming a feature director in 2007, he’s explored the challenges of telling a gripping tale inside a confined space in the critically lauded Buried and the expansive tale of psychics and psychology Red Lights, both of which Cortés also edited.

The screenplay for Down a Dark Hall, written for the screen by Michael Goldbach ( Daydream Nation ) and Chris Sparling ( Buried, ATM, The Sea of Trees ), allowed Cortés to bring the original book by Duncan, who passed in 2016, to life.

Just after Duncan died, an assessment of her work and career was published in The New Yorker , saying, in part, that her books were about “The vulnerability of outsiders, mass hysteria, doppelgängers, sociopathy, revenge. She portrays psychic powers and past-life regressions with a kind of realism; she recognized that even a supernatural evil must have a human heart.”

One of Cortés’ great strengths as a filmmaker was to appreciate those metaphors inside the story, then to weave it into a modern tapestry of mystery, creativity, empowerment, and thrills. His approach appealed to his phenomenal cast.

Says Robb, “Rodrigo is immensely talented. He’s very technical, and had every single beat of the movie worked out beforehand.”

“Rodrigo sees the entire movie in his head,” Robb continues. “He’s very particular but also gives the actors lots of freedom to do what they want. We dove in it to see where it goes. And it was cool working with a director who’s also an editor — you can see he knows what he wants and has a picture of it in his head.”

Adds Silver, “Because Rodrigo thought so much about the camera movements ahead of time, as an actor, you get to play within that, and understand his vision while adding to it.”

Of course, to quote Edgar Allen Poe, “Words have no power to impress the mind without the exquisite horror of their reality.” And so, Fuhrman notes that Down A Dark Hall “Will surprise audiences — it has unexpected twists. It’s a ride you go on. You’re trying to figure things out in Blackwood with Kit as she goes along.”
“People may come for a thrill, but they’ll end up leaving with a lot more,” says Robb.

“We wanted to elevate the original story into something powerful visually and elegant,” says Cortés, “to show the struggle of being a teenager in a very stylized way. Down A Rak Hall starts out as one type of story and then becomes a ruthless, kind of beautiful experience.”

Cortés, who also edited the film, adds, “I saw the opportunity here to use the language of filmmaking to help that story grow.”

Duncan’s book was written in 1974, a year after the publication of the author’s I Know What You Did Last Summer — the Caldecott Honor winner’s first suspense novel — and continued her theme of suspenseful and paranormal situations surrounding a group of teenagers. Though the film adaptation of Down A Dark Hall makes use of the most modern of special effects, it also relies on old-fashioned atmosphere, ambience, and nuanced performances to send chills down audiences’ spines.

“We did try to do the effects in a very grounded way, so everything in the film has very physical perception,” says Cortés. “The creatures of evil are tangible, physical, and real, and we use real fire to make a house really burn. Any time that we use CGI here, it always starts off with tangible techniques. Everything will feel real.”
Which might explain those strange sounds coming from that room behind you…