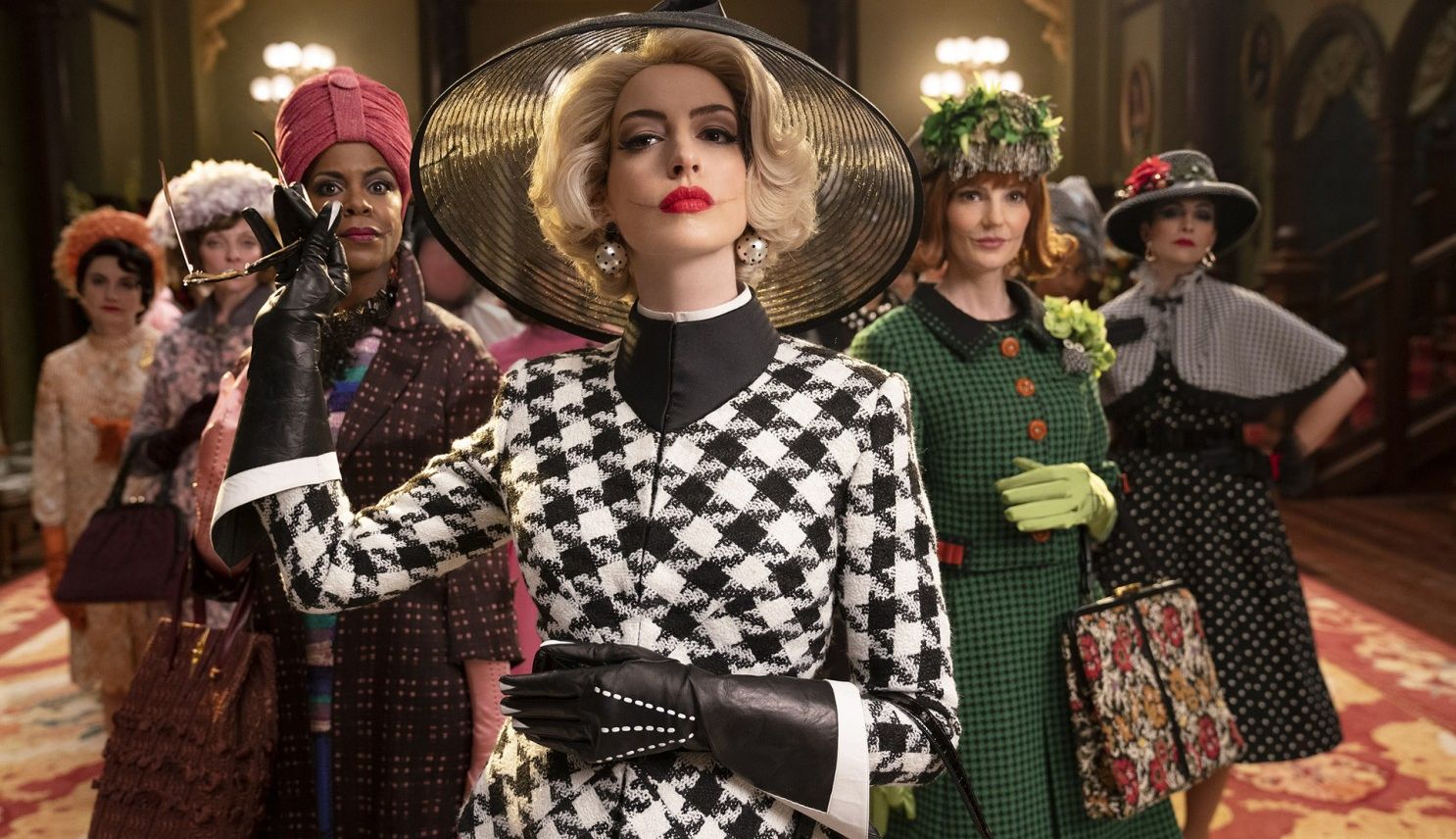 “Roald Dahl’s The Witches” is at once a wickedly funny and heart-warming tale about a young boy who stumbles upon a secret society of witches and must try to stop their evil plan to turn all the world’s children into mice.  In the hands of Oscar-winning director and master storyteller Robert Zemeckis, it’s an exciting and elaborate visual experience.

Based on the book by Roald Dahl, the screenplay was crafted by Robert Zemeckis & Kenya Barris (TV’s “black-ish,” “Shaft”) and Oscar winner Guillermo del Toro (“The Shape of Water”).

What we know about witches: They always wear gloves even when it’s hot outside.  Their nostrils are larger than most.  They all wear wigs to hide their bald heads.  They don’t have any toes.  They have elongated mouths that can stretch to their ears.  And most importantly?  They are pure evil.

“It’s a diabolical story,” smiles the film’s director/co-writer/producer Zemeckis, who was thrilled by the opportunity to reimagine the beloved novel.  “Roald Dahl’s books are like all great children’s books—they’re not really children’s books.  They have children in them that are the main characters, so kids enjoy them, but readers of all ages enjoy his books, and this movie is for everyone.”

While Roald Dahl has an extensive library to offer any filmmaker, “I think The Witches is one of Roald Dahl’s best books, if not his best, and that’s why I was particularly interested in doing it.  The witches are diabolically delicious.  They are evil and unrepentant.  They want to rid the world of children.  I thought that was a wonderfully subversive idea for a children’s story.”

Despite their many physical abnormalities, most of the time the witches in the film look more like glamorous ladies you’d spot aboard a yacht on the Riviera, not riding on a broom.  Anne Hathaway stars as their ultra-sophisticated leader, the Grand High Witch.

“Roald Dahl writes terrifying characters better than anybody else, and he grounds the evil in things that we see in the world, so it’s familiar, it’s entertaining, but it’s also scary,” Hathaway relates.  “Bob understands the sensibilities of cartoon-like humor in a live-action way that has real emotional depth.  He’s really written the rules for what’s possible technologically in film right now.  When you combine his imagination and his level of technical skill, with a Roald Dahl story, it’s a really exciting mix.”

Mixing the fun and fantasy elements of the story, such as transforming the witches from glam to gruesome and cute kids to cuddly mice, were a big draw for Zemeckis in taking on the project, but he also responded to the underlying humane themes at the core of the Roald Dahl story.  Zemeckis offers, “I think the actual story is about acceptance and individuality and being okay with who you are.  It’s a journey about finding your true self and being accepted for your true self, and I think that’s why it’s timeless and enjoyed by so many generations of readers.”

“Roald Dahl’s The Witches” is told through the central character, the unnamed Hero Boy, who goes to live with his grandmother, simply called Grandma, when he is orphaned at the beginning of the story.  “The idea of becoming orphaned or losing your parents is a universal fear,” says Zemeckis.  “It’s not only a fear that children have but a fear we all have and having that empathy with the main character pulls you into the story from the get-go.”

To tell the story, Zemeckis partnered with writer Kenya Barris to build upon a script from the film’s producer Guillermo del Toro.  Barris states, “I am a huge fan of Roald Dahl’s work.  The stories always have a bit of a twist, and blend a little bit of darkness, magic and uncertainty with the whimsical.  That paired with the super deft and skilled nature of what Bob Zemeckis can do on screen felt like the perfect match.  Then to actually get to write with him?  It was an opportunity I could not pass up.”

While the filmmakers stayed true to the delightfully twisted and whimsical nature of the characters and the premise, they moved the story from its setting in Europe to the U.S. state of Alabama.  And rather than moving it to modern day, the writers also turned the clock back to the 1960s.  “It allowed us to tell the story in a more charming way, before there were cell phones, security cameras and 24-hour surveillance,” explains Zemeckis.  “The most important thing was to keep the tone of the book; I think that was the key.”

“There is no question that Roald Dahl is one of the great writers,” says producer Jack Rapke. “His stories are very accessible to children because he writes from their perspective, but his ironic sense of humor plays to adults every bit as much as it does to children.  So, he has something to offer everybody in his books, and combined with Bob’s own unique form of storytelling, we knew this would be a wonderful experience for audiences of all ages.”

To bring his vision of this lively tale to life, Zemeckis headed to Warner Bros. Studios Leavesden, and turned to his trusted creative team, including director of photography Don Burgess, production designer Gary Freeman, editors Jeremiah O’Driscoll and Ryan Chan, costume designer Joanna Johnston and composer Alan Silvestri.  And with characters ranging from young kids to a truly young-at-heart grandmother, the film has someone for everyone watching it to relate to.

“Roald Dahl writes terrifying characters better than anybody else, and he grounds the evil in things that we see in the world, so it’s familiar, it’s entertaining, but it’s also scary,” says Anne Hathaway who plays the Grand High Witch.

Growing up, Anne Hathaway loved to read Roald Dahl stories.  “One of the many things that I really loved about Roald Dahl’s writing, and still do, is the tenderness of it, and how the emotions that children feel are real and unsentimental.  I think that’s really great because often in children’s books there’s a tendency to show everything through a rosy haze, whereas a lot of the children in Roald Dahl stories, especially in The Witches, see things very clearly, which is refreshing.”

As described in the script for “Roald Dahl’s The Witches,” the Grand High Witch is strikingly beautiful with perfect alabaster skin, perfectly sculpted cheekbones, arching black eyebrows, and blood-red lips.  However, even though she is physically beautiful, the fires of Hell rage in her dark, ugly heart.  Perhaps one of the author’s most memorable characters and often described as one of his scariest creations and darkest villains, it was a role that Hathaway was thrilled to explore.

Relishing the evil qualities when describing her, the actress offers, “The Grand High Witch is a complete nightmare—but a very entertaining one.  She hates everything.  Nothing makes her happy.  She has no joy.”

Combining wonderful storytelling with innovation is a hallmark of Robert Zemeckis’s films, especially when it comes to crafting a movie for a broad audience, from kids to their grandparents and everyone in between.

The filmmaker summarizes it simply, stating, “The best movies for children are always ones that are wonderfully enjoyable for adults.”  Much like Roald Dahl’s philosophy might have been, he continues, “I think the key to any film that children can enjoy is to never talk down to the children.  Just make the movie enjoyable for audiences from eight to 80.”

ROBERT ZEMECKIS (Director/Screenwriter/Producer) won an Academy Award, a Golden Globe and a Director’s Guild of American Award for Best Director for the hugely successful and popular Forrest Gump.  He re-teamed with Hanks on the contemporary drama Cast Away.

In addition, Zemeckis directed and produced Contact, the macabre comedy hit Death Becomes Her, he also wrote and directed Who Framed Roger Rabbit, cleverly blending live action and animation; directed the romantic adventure hit Romancing the Stone, and co-wrote, with Gale, and directed the comedies Used Cars and I Wanna Hold Your Hand.

In 1998, Zemeckis, Starkey and Rapke partnered to form the film and television production company ImageMovers.  What Lies Beneath was the first film to be released under the ImageMovers banner, followed by Cast Away, and Matchstick Men.

In March 2001, the USC School of Cinema-Television celebrated the opening of the Robert Zemeckis Center for Digital Arts.  This state-of-the-art center is the country’s first and only fully digital training center and houses the latest in non-linear production and post-production equipment as well as stages, a 50-seat screening room, and USC student-run television station, Trojan Vision.

Zemeckis returned to live action direction with Flight, and The Walk, and Allied. Recently, Zemeckis co-wrote with Caroline Thompson the screenplay for Welcome to Marwen.

KENYA BARRIS (Screenwriter) is an award-winning writer, producer and director whose innovative approach to comedy has firmly cemented his place as one of Hollywood’s great modern storytellers.  With a focus on socially conscious storytelling that reflects our culture and tackles contemporary issues and themes, Barris’s work has earned him praise for telling poignant, powerful stories that make audiences more aware of the world around them while simultaneously making them laugh.

Among Barris’s current and on-going projects are the Netflix original comedy “blackAF”; the Peabody Award-winning sitcom “black-ish” at ABC; two successful “black-ish” spin-offs, “grown-ish” on Freeform and “mixed-ish” at ABC; as well as a recently greenlit third spin-off, “old-ish,” in the works.

Along with his scripted comedy slate, Barris has expanded his work into other genres of storytelling with several projects in various stages of development, including a documentary feature about groundbreaking civil rights attorney Ben Crump, and the first-of-its-kind adult animated music series “Entergalatic,” based on Grammy Award-winning artist Kid Cudi’s upcoming album of the same name.  Additionally, in 2019, Barris ventured into variety sketch comedy with the Netflix original series “Astronomy Club,” starring and named after the first all-black house comedy team at New York’s Upright Citizens Brigade Theatre.

Along with a booming television arm, Barris is busy on the feature film side with several high-profile projects in the pipeline.  Among those slated for release in the coming months is Coming to America 2. Additionally, Barris is in development on a feature-length musical about Juneteenth with Pharrell Williams as his partner on the project; a remake of the classic sports comedy White Men Can’t Jump; and an animated feature based on the songs of Bob Marley; among several others.

GUILLERMO DEL TORO’s (Screenwriter/Producer) distinctive style is showcased through his work as a filmmaker, screenwriter, producer and author.  His films include the Oscar-winning “Pan’s Labyrinth” (three awards) and “The Shape of Water” (four awards, including Best Picture and Best Director).