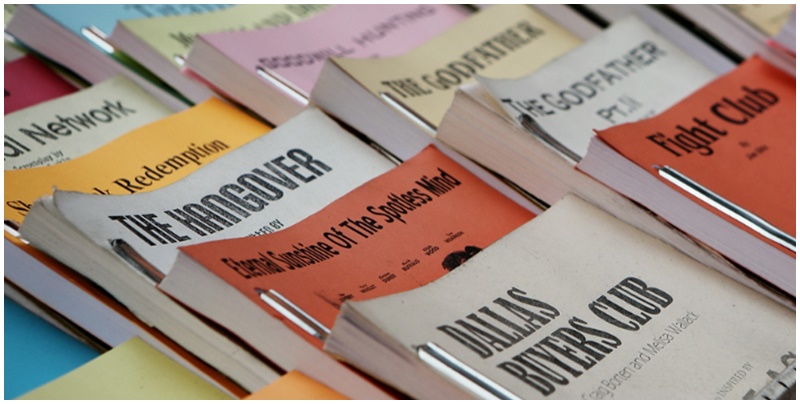 Crafting a catchy title for your story is essential. A dull, confusing, or pretentious title will put people off.

It is important to use a title that is intriguing and memorable. A title that expresses something about your story or theme.

If you do not have a title when you are working on a story, it is acceptable to write ‘Working Title’ and the date of the project.

A title that tells you what the story is about.

The Great Escape – Imprisoned during World War II in a German POW camp, a group of Allied soldiers are intent on breaking out, not only to escape, but also to draw Nazi forces away from battle to search for fugitives.

Titles like Bonnie and Clyde, Gandhi, Lawrence of Arabia and Robin Hood tell us exactly who the story is about. These stories have historic relevance that empower the title – note how clear the concepts are.

Robin Hood (2010) – After the death of Richard the Lion-Hearted, a skilled archer named Robin Longstride travels to Nottingham, where villagers suffer under a despotic sheriff and crippling taxation. He meets and falls in love with a spirited widow, Marion, although she is sceptical of his motives. Hoping to win her heart and save the village, Robin gathers a band of warriors to fight corruption in Nottingham, little knowing they will soon be fighting to save England itself.

Here’s a different the concept of a re-imagining of the same story.

Robin Hood (2018) – A war-hardened Crusader and his Moorish commander mount an audacious revolt against the corrupt English crown in a thrilling action-adventure packed with gritty battlefield exploits, mind-blowing fight choreography, and a timeless romance.

The basic premise of titles like Shakespeare in Love, and The Day the Earth Stood Still clearly evokes a story with characters and action.

Shakespeare in Love – It depicts a fictional relationship between William Shakespeare and a young woman who poses as a man in order to star in one of the writer’s plays. Suffering from writer’s block, Shakespeare needs a new muse. He soon finds inspiration in the form of a beautiful female aristocrat, but her daring determination to act in his play puts their already forbidden relationship on even more dangerous ground.

The day the earth stood still – An alien lands and tells the people of Earth that they must live peacefully or be destroyed as a danger to other planets.

A dog’s journey – In this sequel to A Dog’s Purpose, a dog finds the meaning of his own existence through the lives of the humans he meets. The devoted dog is reincarnated into the life of a troubled teenager.

A dog’s way home – A dog embarks on an epic 400-mile journey home after she is separated from her beloved human.

If you look at titles like Spartacus, and The Graduate we have a clear essence of character, of who the story is about.

Spartacus – In The TV Series our hero is a Thracian gladiator who, along with the Gauls Crixus, Gannicus and Castus, alongside the Nubian Oenomaus, is one of the escaped slave leaders in the Third Servile War, a major slave uprising against the Roman Republic.

The Graduate – Benjamin Braddock has just finished college and, back at his parents’ house, he’s trying to avoid the one question everyone keeps asking: What does he want to do with his life? An unexpected diversion crops up when he is seduced by Mrs. Robinson, a bored housewife and friend of his parents.

Aquaman – The origin story of half-surface dweller, half-Atlantean Arthur Curry takes him on the journey of his lifetime.

The titles of On The Waterfront, Friday the 13th, Star Wars and gives us a clear sense of a situation unfolding in a specific place or a specific time.

On The Waterfront – Dockworker Terry Malloy had been an up-and-coming boxer until powerful local mob boss Johnny Friendly persuaded him to throw a fight. When a longshoreman is murdered before he can testify about Friendly’s control of the Hoboken waterfront, Terry teams up with the dead man’s sister Edie and the streetwise priest Father Barry to testify himself, against the advice of Friendly’s lawyer, Terry’s older brother Charley.

Titles that might not tell us much about the story but will make sense at the end of the story, or not.

The Matrix questions: What is the Matrix?

Neo believes that Morpheus, an elusive figure considered to be the most dangerous man alive, can answer his question — What is the Matrix? Neo is contacted by Trinity, a beautiful stranger who leads him into an underworld where he meets Morpheus. They fight a brutal battle for their lives against a cadre of viciously intelligent secret agents. It is a truth that could cost Neo something more precious than his life.

At the end of the film we understand how the Matrix works and the logic of its complex world.

The Green Mile questions: Where is the green mile?

Paul Edgecomb walked the mile with a variety of cons. He had never encountered someone like John Coffey, a massive black man convicted of brutally killing a pair of young sisters. Coffey had the size and strength to kill anyone, but not the demeanour. Beyond his simple, naive nature and a deathly fear of the dark, Coffey seemed to possess a prodigious, supernatural gift. Paul began to question whether Coffey was truly guilty of murdering the two girls.

At the end of The Green Mile we understand that it is the final mile leading to death row.

Titles like Amadeus and Chinatown don’t give much away about the story and don’t really sell.

Amadeus – Wolfgang Amadeus Mozart is a remarkably talented young Viennese composer who unwittingly finds a fierce rival in the disciplined and determined Antonio Salieri. Resenting Mozart for both his hedonistic lifestyle and his undeniable talent, the highly religious Salieri is gradually consumed by his jealousy and becomes obsessed with Mozart’s downfall, leading to a devious scheme that has dire consequences for both men.

Chinatown –When Los Angeles private eye J.J. “Jake” Gittes is hired by Evelyn Mulwray to investigate her husband’s activities, he believes it’s a routine infidelity case. Jake’s investigation soon becomes anything but routine when he meets the real Mrs. Mulwray and realizes he was hired by an imposter. Mr. Mulwray’s sudden death sets Gittes on a tangled trail of corruption, deceit and sinister family secrets as Evelyn’s father (John Huston) becomes a suspect in the case.

These titles tell you what kind of feelings the story deals with, titles like Raging Bull, Run Lola Run and Apocalypse Now.

Raging Bull – The story of a middleweight boxer as he rises through ranks to earn his first shot at the middleweight crown. He falls in love with a gorgeous girl from the Bronx. The inability to express his feelings enters the ring and eventually takes over his life. He eventually is sent into a downward spiral that costs him everything.

Run Lola Run –Two-bit Berlin criminal Manni delivers some smuggled loot for his boss, Ronnie, but accidentally leaves the 100,000-mark payment in a subway car. Given 20 minutes to come up with the money, he calls his girlfriend, Lola, who sprints through the streets of the city to try to beg the money out of her bank manager father and get to Manni before he does something desperate.

Apocalypse Now  – In Vietnam in 1970, Captain Willard takes a perilous and increasingly hallucinatory journey upriver to find and terminate Colonel Kurtz, a once-promising officer who has reportedly gone completely mad. In the company of a Navy patrol boat filled with street-smart kids, a surfing-obsessed Air Cavalry officer, and a crazed freelance photographer, Willard travels further and further into the heart of darkness.

These titles are usually derived from quotations, like Once Upon A Time in the West, The 6th Day, and One Flew Over The Cuckoo’s Nest.

Once Upon a Time in the West – There’s a single piece of land around Flagstone with water on it, and rail baron Morton aims to have it, knowing the new railroad will have to stop there. He sends his henchman Frank to scare the land’s owner, McBain, but Frank kills him instead and pins it on a known bandit, Cheyenne. Meanwhile, a mysterious gunslinger with a score to settle and McBain’s new wife, Jill, arrive in town.

One Flew Over the Cuckoo’s Nest – When Randle Patrick McMurphy gets transferred for evaluation from a prison farm to a mental institution, he assumes it will be a less restrictive environment. But the martinet Nurse Ratched runs the psychiatric ward with an iron fist, keeping her patients cowed through abuse, medication and sessions of electroconvulsive therapy. The battle of wills between the rebellious McMurphy and the inflexible Ratched soon affects all the ward’s patients.

These titles are familiar and say something about the story, titles like Enemy of the State, Internal Affairs, Unlawful Entry and Basic Instinct.

Enemy of the State – Corrupt National Security Agency official Thomas Reynolds has a congressman assassinated to assure the passage of expansive new surveillance legislation. When a videotape of the murder ends up in the hands of Robert Clayton Dean , a labor lawyer and dedicated family man, he is framed for murder. With the help of ex-intelligence agent Edward “Brill” Lyle, Dean attempts to throw Reynolds off his trail and prove his innocence.