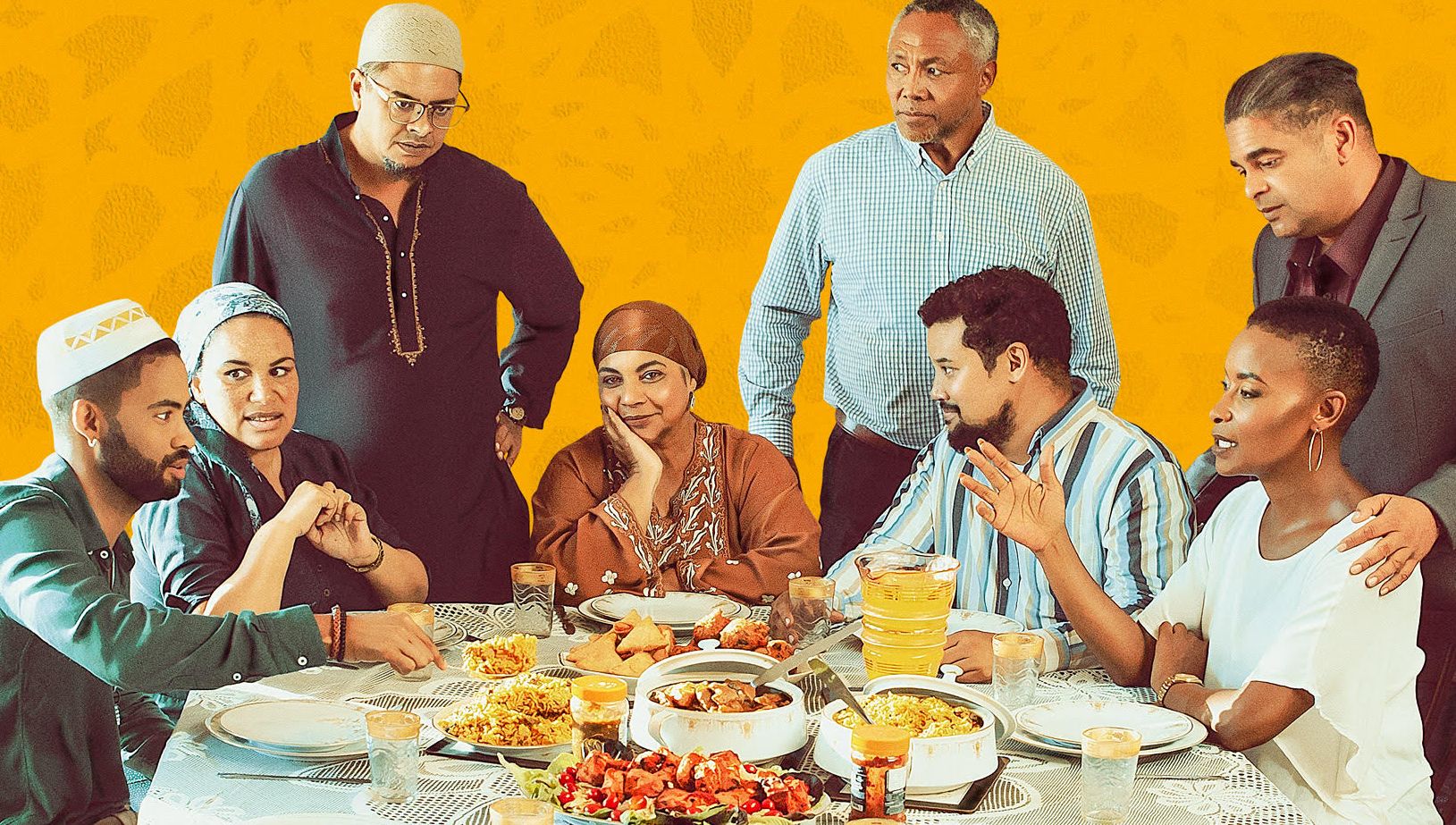 An aging matriarch aims to bring together her fractured, dysfunctional family over Eid-al-Fitr to break the news about her new romance in Barakat, South Africa’s first Muslim film in Afrikaaps.

“Barakat started as a comedy and ended up being about grief,” says director Amy Jephta, who wrote the screenplay with Ephraim Gordon. They made their debut at the 2017 kykNET Silwerskerm Festival in Camps Bay, with their short film ‘Soldier’, for which they won the awards for best screenplay and best short film.

“At first sight, we appeared to want to tell a light-hearted story about a family of feuding brothers brought together to sabotage their mother’s love life,” says Jephta. “What the film actually wanted to be about, is how we deal with the loss of one of our own – in this case, a father and patriarch. The story became about a family grappling with a legacy that has left an empty seat at their table. For me, it is about how we honour familial, collective memory even as life moves on.”

“That difficulty, of ‘moving on’ from the death of a loved one, is a universal theme that speaks to our humanity anywhere in the world. Perhaps that’s why the story we gravitated toward telling was to explore and unpack that grief. But sometimes, pain manifests in absurdity or comedy. And for the Davids family, healing exists at the intersection of conflict, tradition, culture, and food. A family forced to confront absence is the heart and the compass here. It is the story we are actually telling.”

The film tells the story of Ayesha Davids (Vinette Ebrahim), a widow who has to preserve the peace between her four sons (played by Joey Rasdien, Mortimer Williams, Keeno-Lee Hector and Danny Ross) after they all still struggle to come to terms with the death of their father, two years after the fact. Zunaid, Zaid, Yaseen and Nur, who return to the family home to celebrate Eid-ul-Fitr or Labarang as it’s known in Cape Town, marking the end of the month of Ramadaan, have never really dealt with their father’s death and the void he has left behind. Each son’s unprocessed pain manifests in how they are constantly fighting with each other, making their mother extremely sad as she tries to move on with her own life.

Q & A with Amy Jephta and Ephraim Gordon

What was the inspiration behind Barakat?

Barakat first originated with a conversation about depictions of ‘us’ onscreen.

US: black, middle-class South Africans and our families, our histories, our language, and our lived realities. It started as a conversation about the danger of singular narratives about our experience. Questions about why we are so often portrayed as violent, poor, living in squalor, forced to deal with danger and drug addiction, crime, and gang life, as a natural extension of our existence.

What of the beauty of our communities and our people? What of our rich diversity of language – the snap and dynamism of the language we call Afrikaaps, a cocktail of English, Dutch, Arabic, Malay, and Afrikaans? What of our suburbs on the Cape Flats, the landscapes of palm trees and wide streets, the peculiar and specific mix of Cape Dutch architecture and 80s kitsch? What of our families – (mostly) functional, ordinary, concerned with normal preoccupations like relationships, marriages, careers, and petty conflicts?

Can a story about us be simple?

How did you go about changing this narrative?

It was important for us as filmmakers to produce a piece that reflected the lived reality of this subsection of black South Africa in an authentic and honest way. For those who know the world, it was key to show an authentic representation of ‘our’ life on the Cape Flats with a distinctive voice, style, and tone. To portray something recognizable while simultaneously showing ourselves depicted in a fresh way. For those who don’t know the world, we wanted to show something new about the traditions and culture of a Cape Muslim family. While the story itself is simple, this film presents a significant shift in the portrayal of black South African lives onscreen. It was of high priority to show a diverse, varied depiction of minority communities in South Africa.

What of the film’s authenticity?

Authenticity is Everything. Barakat was shot completely on location in Athlone, Gatesville, and surrounding Cape Flats areas, depicting a side of Cape Town – and specifically the Cape Flats – rarely seen in South African films. The film features the local community as well as one of the local mosques.

It was important that the Davids family be middle-class and strongly traditional, a narrative departure from the usual stories set on South Africa’s Cape Flats.

The production team worked closely with the local community and cultural advisors to capture the authenticity of Cape Muslim vernacular in the language, the details of religious ceremonies such as the breaking of the fast and the Crescent Observation ceremony on the last night of Ramadan, and the textures of Cape Muslim life in the production design and costuming. This in service of presenting a Muslim family grounded in their beliefs and faith, to illustrate the warmth and generosity of this community.

Though religion itself is not an overt theme, the symbols and rituals of Islam play a strong role in the film. From the food on the family table, to Aisha and Abdu’s wedding photograph, to Aisha’s prayer mat and Quran and the various trinkets, decor and objects we see in the film – all of these are invested with meaning and a heritage particular to the Cape Muslim community. A depiction we feel is an accurate representation of US.

Our Cultural Advisors were Abduragman Adams, Yazeed Kamaldien, Khalil Kathrada, Moeniel Jacobs, Ayesha Khatieb, Jawaahier Petersen, the Crescent Observer’s Society, Imam Yusuf Pandy and Farouk Valley Omar, all people who hail from a cross sector of the local community, were advisors who helped to ensure that the screenplay is respectful of the cultural and religious nuances of the story.

What is your primary goal with Barakat?

It was important to both of us to depict the Cape Muslim community in a positive light. The Cape is a melting pot of cultures, with an exciting diversity in our communities, and we wanted to show people that regardless of faith, they can watch the film and proudly say ‘this is us’. It was important to us that everyone on screen sounded authentic and spoke ‘Afrikaaps’ the way we know it from our homes and amongst our friends. The script is peppered with those phrases and words that are unique to our culture. We wanted to portray the richness of what it means to be from the Flats, but seen through a different lens.

Amy Jephta is a screenwriter and playwright from Mitchell’s Plain, Cape Town. She has three feature film credits to her name including South Africa’s official 2018 Golden Globes submission, Ellen: The
Ellen Pakkies Story (Rotterdam International Film Festival, Seattle International Film Festival, Pan African Film Festival, Toronto Black Film Festival, and others). As a playwright, her work has been directed by Danny Boyle for the Royal Court and played at The Bush theatre, Theatre 503 and the Jermyn Street Theatre in London and the Riksteatern in Sweden.
She has held fellowships at the Orchard Project Episodic Lab (New York), the AfroVibes Festival (Amsterdam) and the Edinburgh International Festival. In 2019, Amy developed an hour-long original drama pilot as part of Ron Howard and Brian Grazer’s Imagine Impact program. The Park is currently attached to be produced by Imagine Entertainment. Other recent work includes thrilleraction series, Trackers, for M-Net and CINEMAX/HBO and Catch Me A Killer, an action-drama series pilot for eOne. Amy has previously been named as one of the Mail & Guardian’s 200 Top Young South Africans, is the 2017 recipient of the national Eugene Marais Prize for Drama, the 2019 recipient of one of South Africa’s highest art accolades, the Standard Bank Young Artist Award for Theatre and the 2020 recipient of the Baumi Prize for script development (presented by Pandora Film and the Film- und Medienstiftung NRW, Germany). She now focuses on producing for film and television as the creative director of Nagvlug Films. Amy is represented by CAA and 3Arts Entertainment.

Ephraim Gordon graduated from the University of Cape Town with a degree in Theatre, and as a young actor has been nominated for various theatre and television awards across South Africa. Ephraim has worked as a storyliner for local television and is currently on the development and production teams for two new South African series projects for the M-Net group. Behind the camera, he has worked as a casting director on Ellen: The Ellen Pakkies Story and has assisted and advised on critically acclaimed South African films like Number 37 and Noem My Skollie. Ephraim has to date directed over 120 episodes on kykNET’s daily soap, Suidooster, where he initially trained as a television director. He has since directed Sara Se Geheim S3, a local 13-episode series in its final season.

In 2017, Ephraim was the producer of the award winning short-film Soldaat that won Best Short and Best Script at the Silwerskermfees in Cape Town. In 2019, Ephraim was a producer on two made for TV films (Rage and Somerkersfees) for M-Net and SHOWMAX. He is currently Head of Development at Nagvlug Films.