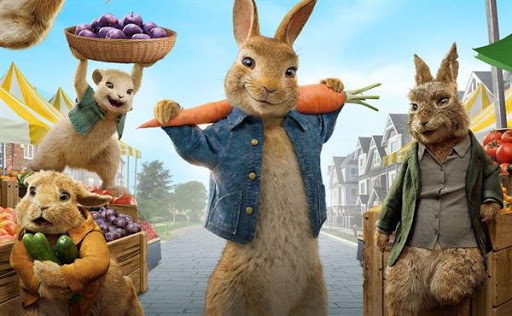 Having conquered the garden, Peter Rabbit sets his sights on a larger world and his biggest adventure yet in Peter Rabbit 2: The Runaway. Picking up from the hit first film, director/co-writer/producer Will Gluck returns for a new story that takes Peter far beyond the garden to the streets of the big city, where he’ll discover what kind of hero he wants to be.

“What makes the Peter Rabbit movies resonate with family audiences is that while they are delightfully funny and entertaining, they don’t shy away from exploring relatable and weighty emotional issues,” says executive producer Doug Belgrad. “In this movie, Peter is forced to confront whether he is ‘good’ and discover his own true nature. Simultaneously, he also has to grapple with the existential threat posed by the prospective arrival of Bea and Thomas’ human baby.”

Everybody knows Peter as the mischievous rabbit – some might even call him “naughty” – but that’s not necessarily how Peter thinks of himself.

“It’s who you are versus who people think you are,” says Gluck, who co-wrote the screenplay with Patrick Burleigh. “Just because people see you in a certain way doesn’t necessarily mean that’s who you are. Peter, Bea, and Thomas go through that journey in the movie.”

“I love these characters,” says Gluck. “Peter makes a lot of mistakes, but always plows on – he always thinks he knows best. That’s what makes him a fun character to watch – it’s always fun to see someone who drives forward without any worry about what the repercussions are. And yet, at the very end, he learns something about it. It’s such a rich world with so many stories to explore.”

“They may be rabbits, but they are just like us,” says producer Zareh Nalbandian, who joins Gluck as a producer and oversees the animation process at Animal Logic. “They’re a family. They have the same conflicts and challenges, and goals and aspirations as humans do.”

Nalbandian says that a sequel had to bring to the screen a story that would reach beyond the first film.

“It had to be bigger, more daring, and a story that justified making a sequel,” Nalbandian explains. “We wanted to take our beloved characters on new adventures, but also bring to life other compelling characters from Beatrix Potter’s world. Importantly, we wanted to get our story out of the garden.”

In the first film, Thomas McGregor and Peter Rabbit wage a no-vegetables-barred battle for control of the garden at McGregor Manor before Bea’s influence gives them the chance to see the other’s point of view.

Gluck says that the new film picks up the relationships from there. “Bea has turned her beautiful paintings into a book, which McGregor is publishing, printing and happily selling in their toy store, and there’s a fragile truce between McGregor and Peter,” he says.

“McGregor has given up his fight against keeping the rabbits out of the garden. They can come and go, as long as they leave McGregor’s prized tomatoes alone,” notes producer Jodi Hildebrand. “Peter is trying to behave himself, to be a leader and keep everyone else away from the tomatoes. McGregor has accepted Peter into his life and into his home. Everything’s pretty even keeled.”

For now, that is. Because the outside world is about to tread its fancy city shoes into their bucolic world.

“Because of the book, there’s interest from a publisher to capitalize on a book series,” continues Gluck. With that, the makeshift family of humans and rabbits heads for the big city of Gloucester, home to the publishing house of Nigel Basil-Jones.

Charming and debonair, Basil-Jones is charmed by the book, but might be misreading who Peter is at heart – and that misconception spins Peter into a web of self-doubt. “Nigel thinks Peter is a bad rabbit, and Peter thinks that even Bea and Thomas see him as mischievous – so Peter figures he must be,” explains Gluck. “Peter has reached that time in one’s life when we’re all told what we are by so many people that we have two options; we can embrace what people think we are, or we can fight against it. Peter decides to embrace it, which leads to his meeting some new characters who aren’t necessarily of the highest moral character.”

In expanding Potter’s stories for the screen, the filmmakers worked closely with Potter’s publishers at Penguin and Frederick Warne & Co Limited (an imprint of Penguin Random House Children’s), which have published her tales for more than 100 years. “We were very proud of how we adapted and updated Beatrix Potter’s classic story in the first film,” says Hildebrand. “On the sequel, working alongside the caretakers of Beatrix Potter’s work at Frederick Warne & Co., it was very important for us to ensure we were capturing the nature of the stories that are the reason for their enduring readership.”

Francesca Dow, MD for Penguin Random House Children’s, said, “We are hugely excited about Peter Rabbit 2: The Runaway from Will Gluck and Sony Pictures. The first film proved an immediate and resounding hit with audiences around the world and allowed families to connect with Peter in an entirely new way. This new adventure will celebrate the fun and mischief that Peter Rabbit has always been synonymous with, in a larger-than-life way and we anticipate that families will enjoy it as much as the first movie.  Frederick Warne & Co., part of Penguin Random House Children’s, is proud to be the home of Peter Rabbit and the publisher of Beatrix Potter’s tales. We hope that the movie will inspire families to continue to rediscover and read the adventures of Peter Rabbit and his friends.”

Bringing that legacy to the screen is co-writer/producer/director Will Gluck. Belgrad says Gluck has a deep love and understanding of the material that comes through in the films.

“Will has a deep affinity for the characters that Potter created. He may be a little bit Peter Rabbit himself… clever, funny, and always with a plan, which made him the perfect filmmaker to tackle the material a second time to entertain family audiences in the same funny, spirited, heartfelt way as the first movie.”

Nalbandian adds, “We wanted to have an inventive spirit, to create an adventure that people haven’t seen before, while staying true to her vision, and I feel like this movie does that so well.”

Hildebrand notes that the stories are timeless and heartwarming, but also unsentimental – they often touch on the harder aspects of life. (After all, in The Tale of Peter Rabbit, it’s revealed that Peter’s own father was put into a pie by old Mr. McGregor, and Peter nearly suffers the same fate.) “Having children of my own and reading Beatrix Potter’s stories with them, she didn’t pull punches,” says Hildebrand. “Her stories have a serious undertone, and we’ve tried to mirror this in making sure we are not speaking down to an audience – challenging kids and giving them role models in Peter, Bea, and Thomas, to learn something from and see themselves in.”

The core creative team from the first film – including director of photography Peter Menzies Jr., Production Designer Roger Ford, Costume Designer Lizzy Gardiner, VFX Supervisor Will Reichelt, music supervisor Wende Crowley, and composer Dominic Lewis – returned for the second film. But where the first film took root in the garden, the sequel spreads it branches to the big city.

As with the first film, the sequel would shoot primarily in Australia, so finding locations to stand in for the city of Gloucester began by looking in Sydney’s historical regions, such as The Rocks and other areas with English architectural heritage.

The animation and visual effects team was led, as for the first film, by Animal Logic, one of the world’s leading animation companies and contributors to many Oscar winning and nominated films.

Producer Zareh Nalbandian, also CEO and Co-Founder of Animal Logic, says: “In the first film, I think we found how to create the CG characters and integrate the visual effects in a very funny and an emotional way. In taking them out into the bigger world in this film, it started to get really complicated, in terms of the VFX, the animation, and for the actors interacting with it all. It heightened the fun of the movie, but in terms of the animators and the crew, it created a lot more complexity.”

For visual effects supervisor Will Reichelt, the fun of stepping back into the Peter Rabbit world was the increase in scope, and hence in challenges for him and his team.

“Working on a live action film with animated characters is easier in some ways on a sequel, because a lot of the processes for integrating the characters into the live-action plates is similar, but the increased scope of the sequel, with more complicated set ups and action took the complexity to another level,” Reichelt explains.

For inspiration, the animators looked at reference that went far beyond the genre. “We looked at a few different references for Barnabas, including movie mob guys like Tony Soprano,” Reichelt notes. “We looked at characters that have a very stoic nature, but who are quite seductive as well. We didn’t want to make him a cartoonish caricature bad guy.”

For director Will Gluck, the opportunity to develop better and better iterations of the animation and VFX allowed the team to greatly refine the overall production.

“We had such an incredible opportunity to change things, much to the animators’ excitement and chagrin,” he says. “I always say it’s like making two movies: you make the first one when you shoot it and the second in the VFX. It gives the whole team an opportunity to explore the limits of our creativity and vision.”

Will Gluck is a filmmaker with a uniquely authentic voice and an aim to create projects that reflect popular culture and captivate audiences. Gluck has made a name for himself as a great comedic filmmaker who brings heart and a down-to-earth quality to all his endeavors.

Gluck most recently directed Peter Rabbit, which grossed over $350 million worldwide. He made his feature directorial debut with 2009’s darkly funny Fired Up. This was followed by Easy A (2010), a modern-day re-imagining of Annie, which he directed and co-wrote, Friends with Benefits (2011) for Sony Pictures. Through his Olive Bridge Entertainment banner, Gluck is produced the 2020 DGA-winner “Encore!” for Disney+, the dramedy series “Woke” for Hulu, an adult animated comedy for Netflix, “Sneakerheads” for Complex, as well as numerous other projects in development for traditional and streaming television. Past credits include Golden Globe nominee Michael J. Fox’s television comeback for NBC, family sitcom “The McCarthys” for CBS, and the Annie-nominated animated series “Moonbeam City” for Comedy Central.

After getting his masters at Trinity College Dublin, Ireland, Burleigh began his career as a playwright. His plays have been seen at Atlantic Theater Company, Naked Angels, New York Stage & Film, The Blank, and The Skylight.  He was a 2017 Humanitas Foundation playwriting fellow.

He worked on the upcoming Marvel Studios film The Eternals with director Chloe Zhao. Prior to that, Burleigh was tapped to reboot the Power Rangers feature film franchise for Hasbro and Paramount. He was one of four writers in the Marvel Writers Program, out of which Marvel hired him to do extensive production writing on Ant-Man and the Wasp. Burleigh also adapted Nicholas Griffin’s book Ping-Pong Diplomacy for Archer Gray with Will Gluck to direct. He has written feature screenplays for Sony Pictures, Dreamworks Animation, and Fox/Disney, among others.

Burleigh also writes personal essays and non-fiction. His 2019 New York magazine piece about his family’s rare genetic mutation received widespread attention and was reported on by NPR, the BBC and other news outlets around the world.