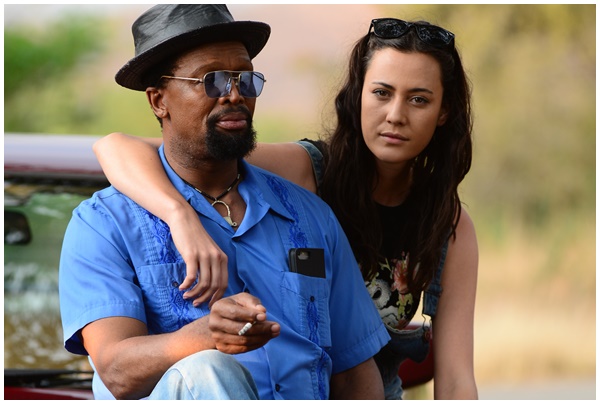 The narrative was born out of the desire to break the mould in terms of how South African stories are told when it comes to our post-apartheid reality.

The world of writer-director Lwazi Mvusi’s narrative for Farewell Ella Bella is focused on the road form the dorpies of the Western Cape, the home of the diamond- Kimberley and to the outskirts of Gauteng.

It is a narrative world of small towns. Where the rest of the world is hurtling forward at an alarming pace, these small towns are somewhat entrenched in the past- the architecture, the people and the influence of South Africa’s racial past.

It is in this world that Ella (Jay Anstey) ,a young white woman,  and Neo (Sello Maake Kancube) , a middle aged black man  contemplate the effects of history both on these towns and in their own lives. The perceptions and preconceived notions of them from the characters that they encounter affect their journey as the film looks at our looks at our post-apartheid reality through the lens of the abandoned small town.

It is only in reconciling oneself with one’s past, that one is able to successfully determine one’s future. This is the idea that Farewell Ella Bella is premised on. A sentiment that is true as much for the main character Ella as it is for the country of her birth. Like South Africa, Ella is in a state of transition.

She is young but the ghosts of her past hinder her in her determination to find happiness and prosperity in her future.

Farewell Ella Bella is about the importance of learning from the past however not being shackled by it. As she and Neo traverse the South African landscape, the realities of life in a postapartheid South Africa- with all of its racial prejudice, economic inequality yet hilarious idiosyncrasies of a country still grappling to come to terms with its new reality, Ella comes to discover who she is when she is able to find herself separate from the narrow, isolated world she left behind.

For Ella (24), the death of her alcoholic father saddles her with nothing but debt and the bitter memory of a complicated past.
Abandoned by her mother at a young age, she has sacrificed her life, career opportunities and love to care for a man she resents; leaving her adrift in the world after his passing. The re-emergence of her nomadic yet charming musician godfather, Neo(51), at her father’s cremation gives Ella the opportunity to rediscover her identity by deserting the suffocating and constricting life she has lead in the small town of Beaufort West. She decides that she will bury his ashes at her childhood home in Johannesburg and that Neo – who is the epitome of a man child- will be responsible for taking her there.
Therefore, the two set out in his beloved old BMW and traverse the Karoo desert all the while meeting various colourful characters who give Ella and Neo insight into themselves and each other.
As the landscape in their backdrop changes so their relationship is challenged and deepened as they come to realise how much they need each other and how imperative it is for them both to no longer be haunted by the ghosts of the past.
The story is a coming of age tale both for Ella and Neo as the twists and turns of the long, open freeways from the Western Cape through the Northern Cape and up to Gauteng enable them to find strength in each other, maturity within themselves and wisdom in the characters they meet along the way.

As the director, Lwazi Mvusi’s intentions with this film were twofold.

Mvusi wrote the script for this film five years ago.

“I had taken a road trip with my family and was inspired by the South African landscape. But the heart of this film is built around the pursuit of happiness. It is a concept that my father taught me to value above all else. Ella is a character steeped in misery. She blames those around her for it. But, in the course of the film, she learns that only she can bring herself that happiness. She has to choose it. ”

“I didn’t know then that my father would pass away two months before we would go into production for Farewell Ella Bella. I didn’t know that this message that he would pass on to me at fifteen- one that coloured every decision that I made since- would become a message that I would try to pass on to the rest of the world. I don’t believe people are taught to be happy. Happiness can seem flighty and inconsequential. But, as my father said, a successful life is the ability to look back and say, “that was a life worth living”. It is what I strive for everyday. It is what Ella desires above all else.”

The film shows us that this journey to happiness is long and arduous but also necessary and worthwhile.

“Secondly, the narrative was born out of the desire to break the mould in terms of how South African stories are told when it comes to our post-apartheid reality and the interaction between people across race, gender, language and economic background thereof.

Although there is a social and political conversation throughout the film, the narrative privileges the relationships between these characters beyond the stereotypes they represent. It is an attempt at depicting characters who are more than their prejudices and who they appear to be. The film does not foster reconciliation but rather shows that when we take the time to really see each other, we start to understand each other.”

Lwazi Mvusi completed her Bachelors’ Degree in Motion Picture at AFDA (the South African School of Motion Picture Medium and Live Performance) in 2010. Additionally, she completed her Honours degree in Creative Writing and then Master of Arts degree in Film & TV at the University of Witwatersrand.
In 2014, she wrote and directed a 24 minute science fiction short film entitled The State produced by Born Free Media. This was under the NFVF’s Women in Film initiative. She has also worked on eTV’s third season of Mzansi Love produced by Fireworx Media where she directed the fifth episode.
She has worked as a writer for several sitcoms and dramas for South African television. And a Story Editor for a telenovela Broken Vows.

Free Women Features is a newly established production company that specialisesin training, development and mentoring in the film and television industry as its core business. The directors together with supervising producers Carolyn Carew and KamscillaNaidoo of Free Women Films have combined thirty years’ experience in the film and television business, including digital content production. The company is owned by TsholoMashile and LwaziMvusi.

Tsholo Mashile has over 15 years’ experience in television production, line production and production management in numerous TV dramas, documentaries, magazine programmes and commercials. She is currently in post production with her feature film, Farewell Ella Bella. Her projects include 90 Plein Street, When We Were Black and loveLife’s PSAs. Tsholo’s skills and expertise lie in many areas, from budgeting and reconciling to scheduling, crew and cast contracting, preparing for shoots and client liaison.

Tsholo’s true passion though is training and development and she sees her role increasingly in using film and television to inspire young people, especially women in rural areas. In 2014, Tsholo produced five short fiction films directed by mostly first-time women filmmakers. It was funded by the National Film and Video Foundation and the Department of Trade and Industry. The project was entitled Free Women Films Africa by Women and was screened on SABC1 from February to March 2015. It was one of the largest training and mentoring projects for women creatives in fiction short films in South Africa. The filmmakers and their films have travelled to New York, Chicago, Cape Town and throughout Gauteng and KwaZulu Natal.