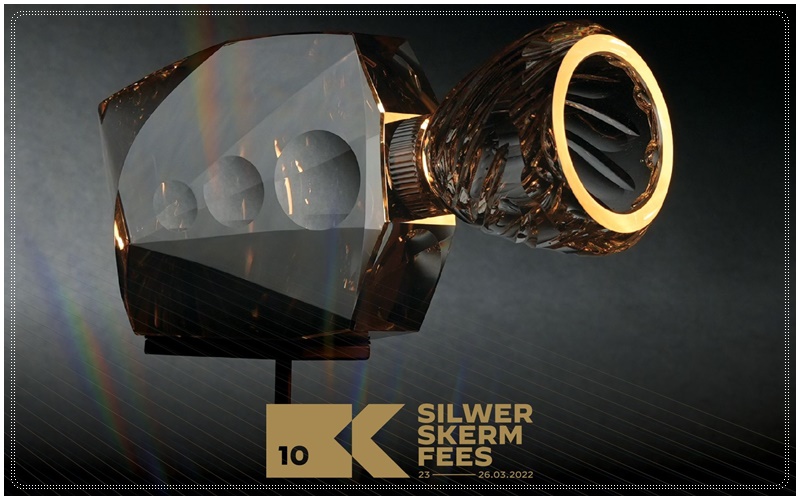 The 10th-anniversary Silwerskerm Film Festival will play out in a brand-new hybrid format from 23 March 2022 when it showcases South African filmmaking at its best.

The 10th Silwerskerm Film Festival includes nine local feature films in competition for the festival’s prestigious awards and 17 short films produced with the financial support of kykNET and the festival.

All the events on the hybrid festival’s main programme will take place simultaneously at the Bay Hotel in Camps Bay and the Silwerskerm Film Festival website from 23 March to 26 March 2022, movie lovers from across the country can now sign up to enjoy the festival from the comfort of their homes. The registration fee for the virtual festival and four days of premium local movie entertainment – is R190 and will be donated to the Tribuo Fund, which was created to assist entertainers suffering a loss of income due to the Covid-19 pandemic. To register for the virtual festival, go to the Silwerskerm Film Festival website.

Please note: All Afrikaans movies at the festival will be screened with English subtitles.

Besides these exciting films, guests at the Bay Hotel and those attending the festival virtually will also have access to Q&A sessions with the filmmakers, industry discussions and some existing local films that have received limited releases in the past two years.

In pre-Covid times, the feature films in competition were movies funded by kykNET and M-Net, making their world or South African premieres at the festival. But because the festival, initially planned for August 2020, was put on ice due to Covid restrictions, this year’s line-up will include movies that should have debuted at the 10th-anniversary festival but whose release dates couldn’t be tied to the festival anymore.

Hence, three of the films in competition that have already been released theatrically or on DStv BoxOffice will only be screened on the Silwerskerm Film Festival website – as part of a special build-up to the festival.

These three films are Kaalgat Karel, Klein Karoo 2 and South Africa’s official Best Foreign Feature entry for the 2022 Oscars, Barakat. They will make their way to the website on March 3, 10 and 17, respectively.

The following feature films will form part of the programme between 23 and 26 March:

For Beurtkrag, which has its world and South African premiere at the festival, local celeb couple Ivan Botha and DonnaLee Roberts joined forces with director Jozua Malherbe (Griekwastad) to rework the script of a 2015 Silwerskerm Film Festival short film.  TRAILER

Travis Taute’s nailbiting action film Indemnity features a top-notch ensemble cast, including Nicole Fortuin, Gail Mabalane and Hlomla Dandala, while Jarrid Geduld delivers a tour de force performance as a fireman fleeing for his life after being framed for the murder of his wife. Following this political thriller’s release on international streaming services, critics raved about its impressive cinematography and special effects.  TRAILER

Down So Long is an experimental satirical comedy-drama about a man who lives in the informal settlement of Hangberg with his wife and extended family. Director Angie Mills and producer Damir Rodonic aimed to tell an authentic story by using only two professional actors. The remainder of the cast hails from the Hangberg community depicted in the movie.

Vlugtig is an adaptation of a previous Silwerskerm short film. Producer and director Marinus Gubnitz used many of the actors who starred in his short, but Jane de Wet joined the cast for the feature-film version. Known for her roles in the Showmax series The Girl from St. Agnes and kykNET’s Spoorloos: Steynhof, de Wet received the Sillwerskerm Award for Most Promising Young Star in 2019 for her performance in Griekwastad.  TRAILER

Gaia is the first ecological horror movie in Afrikaans and has not been seen by South African audiences yet. Since its world premiere at the South by Southwest Festival in the US in March last year, this groundbreaking film has garnered several awards at prestigious festivals. Furthermore, Variety named it one of the Top 15 Horror Movies of 2021. It also made igm.com’s Top 13 list and the Forbes Top 10 list. TRAILER

The short films in competition span a variety of genres, and this time around, there are more films in the Western Cape Afrikaans dialect, Afrikaaps or Kaaps.

One of these films in Afrikaaps, My Beskermer, is the festival’s first post-apocalyptic science fiction film. Another film in Afrikaaps is Nagvoël, about a guy who fights tik dealers in the hope of being invited to join the South African Superhero League. And, in Net ons, we meet two bloodthirsty vampires who meet up on Cape Town’s promenade.

Two mind-bending psychological thrillers in the slate of short films include Verstikking and Aan/Af, while delightful films such as Die Horries and Twintig Tone in ’n Hangkas, put a new spin on romantic comedies. There is also a unique take on pregnancy in Skyn and Katvis and a film called Vrywater, set in a unique fantasy world where sea worshippers are awaiting the fulfilment of a prophecy.

The challenges of modern families are at the cores of Bennie Bingo, Bittersoet and Sporadies Nomadies, while social issues such as isolation and the plight of the homeless are tackled in Bergie, Die Groensone and Leemtes en Leegheid.

Among these existing works invited to be part of the festival are the 2022 Oscar-nominated documentary Writing with Fire and South African filmmaker Phumi Morare’s  2022 Student Academy-winning live short film Lakutshon’ Illanga [When the Sun Sets].

Furthermore, festivalgoers – who will either attend the Silwerskerm Film Festival in Camps Bay in person or enjoy the screenings virtually on the festival’s website – can look forward to watching Kariba Ledigo’s beautiful award-winning short film What Did You Dream? Another must-see is the headline-making short film about gender-based violence #WeAreDyingHere, of which Siya and Rachel Kolisi are the executive producers.

Writing with Fire, presented by Encounters, will be screened in the Theatre on the Bay at 11:00, on Friday, 25 March, and on the festival’s online programme on Saturday, 26 March, at 19:00. This means everyone who has registered for the virtual festival will be able to watch the first Indian film to be nominated for an Academy Award in the category Best Documentary Feature just three days before this year’s Oscar winners are announced.

This inspiring documentary, highlighting Khabar Lahariya, the only newspaper in India run by Dalit women (women belonging to an oppressed caste), has already garnered 21 gongs at prestigious award ceremonies across the globe. Its great festival run started with its world premiere at the Sundance Film Festival, where it won the Audience Award and the Special Jury Award. Thereafter, the world’s most prominent critics and international newspapers have not stopped raving about the inspiring story of the influential female journalists who broke traditions with their smartphones in a cluttered news environment.

With the exclusion of Writing with Fire, all the films that are not eligible for the Silwerskerm Festival Awards will also be available on a video-on-demand offering on the festival’s website this year. (Note: The films screened in the Rotunda, will also be on the main online programme for registered viewers. Films out of competition screened in the Theatre on the Bay, however, will only be available online as ticketed video-on-demand features.)

The 10th Silwerskerm Film Festival’s video-on-demand service will run from Wednesday, 23 March, at 09:00, until midnight on Saturday, 26 March.

For more info about these films, visit the Silwerskerm Film Festival website

The complete programme for the 10th Silwerskerm Film Festival is available on the website.